Combined ratio and other trends Q2 2013 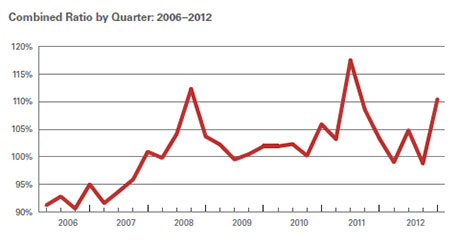 “As good as insurers’ results for 2012 were compared with their results for 2011, they pale in comparison with long-term norms. Insurers’ 5.9 percent overall rate of return for 2012 fell far short of their 8.9 percent average rate of return from 1959 to 2012,” said Michael R. Murray, ISO assistant vice president for financial analysis. “ISO estimates that, with today’s investment yields, financial leverage, and tax rates, the combined ratio would have to improve by an additional 4.6 percentage points to 98.6 percent for insurers to earn their long-term average rate of return.”