Insurers come in a variety of forms — varying by size, the type of insurance they write, and overall goals. Regardless of size and type of insurance, virtually all carriers place at least one of the ­following three goals at the top of their priorities:

The strategies that insurers use to achieve those goals are as varied as the insurers themselves.

Methods for improving market share, loss ratios, and combined ratios include better pricing models, improved underwriting ­decisions, better marketing campaigns, and enhanced claims handling. Whatever strategy an insurer takes to reach its goals, every aspect of a business can benefit from an improved understanding of the risk it writes.

As the market trends toward more analytic- and data-driven ­decisions, insurers are continually exploring ways to rate better and more precisely. Increased quantities of data and highly refined rating plans give insurers the opportunity to become extremely risk-specific in their pricing. Risk-based pricing — charging different rates depending on different risk characteristics — leads to stability and confidence in pricing. The ability to differentiate between perceived risk and actual risk affords insurers a better way to achieve their financial goals.

One specific and successful methodology being used by a small percentage of insurers in the homeowners market is by-peril ­rating. Homeowners insurance is typically sold as an all-risk ­policy, which covers all causes of loss except those specifically excluded in the policy. Rating by peril, or cause of loss, allows insurers to rate more accurately by having a better evaluation of their true loss exposures. Developing a peril-specific rating plan provides insurers flexibility to rate policies adequately, increase market share, reduce loss ratios, and lower combined ratios.

By rating at the individual-peril level, insurers are better able to define and price risks. Breaking down risks to the individual-peril level is intuitively appealing because some variables do well in predicting certain perils but not others. For example, population density may be an excellent predictor for theft and vandalism but provides little useful information for the hail or lightning peril.

To get a better understanding of the impact of by-peril ratemaking on company growth and profitability, ISO identified insurers that are currently using by-peril rates and those that were using them five years ago. We examined the market share, profitability challenges, and successes that all those insurers have seen in the last five years. We found that from 2007 to 2012, the homeowners insurance industry saw the number of insurers using by-peril rating double to the 25 carriers currently rating by peril.1 The vast majority of the 25 insurers implemented their by-peril rating plans within the last three years.

Those 25 insurers made up a combined 28 percent of the total homeowners premium market in 2007. Today, with the adoption of peril-specific rating, those same 25 insurers have boosted their combined market share to 34 percent, an increase of $4.6 billion in direct written premiums.2 While many strategic aspects of those companies may contribute to the overall growth in market share, all other factors being equal, it appears that those insurers have been able to take advantage of risk-specific pricing to increase their market share in a ­relatively short time. That's a great testament to the opportunities that exist for insurers planning to implement by-peril rating plans for more individualized pricing.

In addition to increasing their market share, those same insurers have also improved loss ratios and lowered combined ratios over the same time frame. In 2012, insurers using by-peril rating plans had loss ratios 7.4 points lower than insurers not using by-peril rating (69.2 percent vs. 76.6 percent, as shown in Figure 1). Similarly, combined ratios for by-peril companies were 8.8 points lower than for insurers not rating by peril (96.1 percent vs. 104.9 percent). Within the combined ratio, not only are loss ratios lower (7.4 points), but expenses are also lower (1.4 points), thus demonstrating multiple benefits. 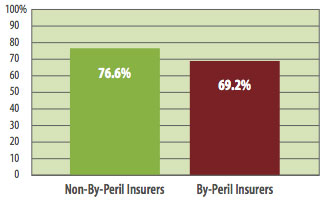 With lower loss ratios and lower expenses, insurers have the flexibility to reduce premiums for current policyholders and potential policyholders when indicated, thus attracting even more business to the company. All parties involved can recognize the benefits.

As the homeowners market grows, so do opportunities for insurers. In 2012, homeowners insurance made up 27 percent of all personal lines premiums, a total of more than $77 billion.3 The last five reporting years have seen a steady increase in direct written premiums for homeowners insurance. According to A.M. Best financials, premiums have increased an average of 3 percent annually from 2007 to 2012.4 (See Figure 2.) In contrast to other major lines of business, that's a promising scenario for home­owners insurers.

While the news is good regarding premium growth, maintaining low losses and expenses has proven difficult. For example, industry combined ratios have exceeded 100 percent in four of the last ten years, justifying the increase in premiums. Insurers that can more accurately price will be able to take advantage of the growing market, and by-peril rating is an excellent way to do that. As mentioned, by-peril raters have seen combined ratios of 96.1 percent versus other insurers performing at a 104.9 percent combined ratio.

Other strategies may yield increased market share, lower loss ratios, and lower combined ratios, but research shows by-peril rating to be very effective. More than likely, the vast majority of insurers will rate by peril within ten years, and those that implement sooner than others will have an early and lasting competitive advantage.