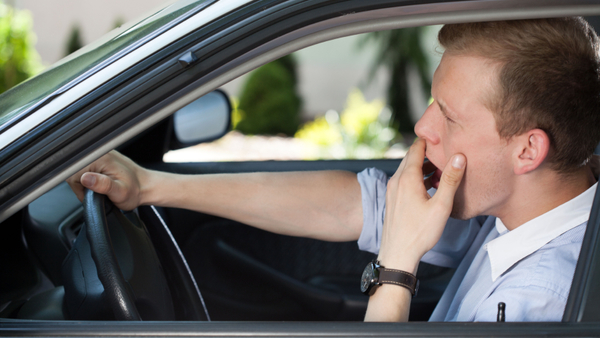 While many accidents result from speeding or recklessness, these risky behaviors themselves can also be driven by ancillary causes such as daydreaming or “zoning out.” As a result, risk may possibly be reduced not only by conditioning policyholders to operate their vehicles more skillfully, but also by teaching them better lifestyle habits.

Recently, one life insurer began providing policyholders with free fitness tracking devices. Consumers who share their daily activity data with their insurer may earn discounts of up to 15% if the collected data can show such consumers are pursuing a healthier lifestyle. Along these lines, several auto insurers are considering technologies to monitor drivers’ heart rates or blood pressure while driving by applying, in part, UBI scoring algorithms.

To assess the effect that lifestyle risk factors can potentially have on driving risk, a test driver recently undertook an experiment in which he compared data collected on his fitness tracking device with driving data gathered using a major insurer’s UBI smartphone app. The fitness tracker measured the duration and quality of the driver’s sleep, activity, and exercise levels.

The UBI app scored each trip the driver took in terms of acceleration, braking, and cornering (“ABC”) habits. Because he encountered similar routes and driving conditions on most days, the driver’s living habits were essentially the only substantial variables. To analyze which habits had the most impact, correlations between the driver’s daily sleep and exercise totals and corresponding trip-by-trip UBI scores for the first 45 days of 2016 were calculated.

The five strongest correlations are presented in Figure 1 below. An analysis of these trends specific to this driver yielded several insights into how a driver’s activities might be adjusted to reduce behind-the-wheel risk. 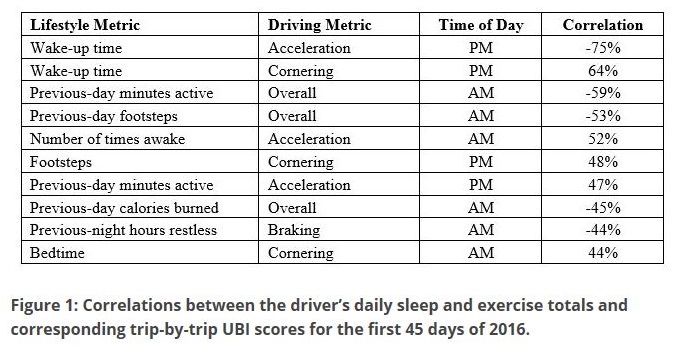 Paradoxically, his acceleration habits were actually much worse and his braking habits were moderately worse on these same nights. This was perhaps because he exerted extra energy when hitting the accelerator or brakes too hard or too quickly. In this experiment, feeling well rested appears to contribute to higher road awareness but lower self-awareness. To counteract the latter, it’s possible the driver needs to complement solid sleep habits with a relaxing activity before driving, such as listening to calming music when feeling particularly energetic.

The next strongest correlation found in the analysis was between daytime activity and its effects on driving capacity the following morning. Generally, the day after the driver recorded a very high number of steps, driving scores worsened across all three ABC categories. Exercise is typically seen as reducing stress, but for this driver, the high number of steps his tracker recorded corresponded with running from meeting to meeting at work. Socializing with work colleagues eased the stress, but delayed his work. Days when he couldn’t catch up were followed by morning commutes that made his mind race — and apparently his vehicle as well! The analysis taught him that staying late to finish work led to fewer distractions on the road the next morning.

Walking potentially improves a UBI score, because miles traveled by foot are miles in which the insured vehicle is not on the road and thus exposed to related risks. However, “hoofing” it may also improve performance behind the wheel. Moderate-to-strong correlations were found between how many steps the driver took, number of calories burned on a particular day, and how well the driver handled corners later that night. This is consistent with a common perspective that exercise improves outlook and mental acuity.

As noted above, going from meeting to meeting stressed the driver, but that night he was still “riding high” (as were his UBI scores) likely driven by the exercise and pleasant interaction with colleagues. These findings suggest that — to consistently improve his UBI score — the driver might consider taking more frequent breaks or socialize with colleagues on days with fewer meetings and greater flexibility to finish work.

One final correlation may seem counterintuitive. The number of times the driver awoke or was restless each night was positively correlated with his driving scores the next morning. Indeed, the more the driver tossed, turned, or paced, the better his scores. It can be hypothesized that feeling groggy from a restless night’s sleep initially led the driver to take greater heed of his surroundings (and to consume more caffeine). In turn, this heightened consciousness may have resulted in the driver making fewer snap decisions or rapid maneuvers, thus improving his scores.

Conversely, better sleep meant better driving scores overall, particularly in relation to handling corners. This correlation suggests the driver might consider “driving like he’s groggy” even though well rested. One tactic for achieving this might be adjusting the car’s mirrors or moving the driver’s seat to a less reclined position.

This experiment—although not carried out under the most rigorously scientific standards—in some ways contributes to support a basic UBI premise: the premise being that driving habits can be improved when they are acknowledged and monitored. In this analysis, the driver became more aware of his driving behavior and patterns when he began to closely monitor them. In so doing, he was able to realize opportunities to modify his driving behavior. A telematics data exchange—where policyholders can share driving data with their insurers to earn discounts—can contribute to road safety. Think of the possibilities: A data exchange may also one day become a conduit for the one in five Americans who owns a fitness tracker. These health-conscious consumers might choose to share their fitness data with insurers in return for auto-related incentives.

(A note of full disclosure: The test driver in this experiment was yours truly, author of this report. The analysis and opinions expressed here are mine alone and not those of my employer. The reader may have a different experience and independently draw his or her own conclusions.)

This article was produced by Verisk Telematics and first appeared as part five of a ten-part series of articles on PropertyCasualty360.com, which has permitted its reuse.

Read the next article in the Telematics series: Potential societal benefits of telematics