As a reporter of market-specific pricing information for repairing or rebuilding structures and replacing personal property, Xactware conducts hundreds of thousands of industry surveys, and reviews more than 100 million data points per year submitted through field estimates written by contractors and adjusters as well as electronic data feeds provided by retail merchants. This extensive library of research enables Xactware to provide a comprehensive report of important industry trends.

In the first quarter of 2019, Xactware observed cost increases to several material categories. The most significant change occurred in lumber material costs which decreased 4.07 percent over the quarter and 7.38 percent since April 2018. More details about this change are available below in the Lumber material costs section. 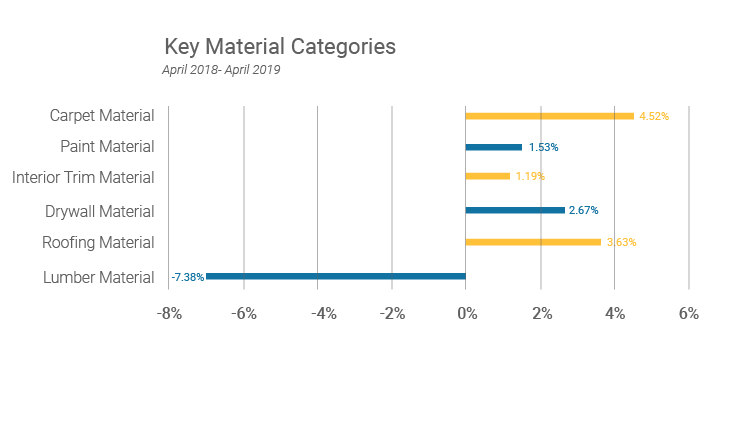 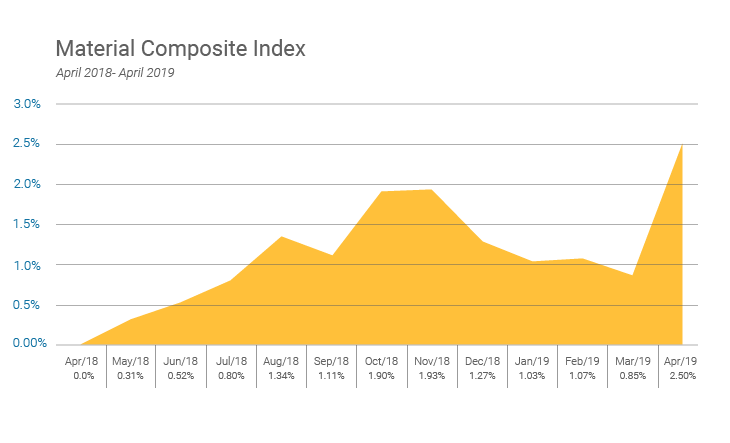 Xactware’s Pricing Data Services also surveys thousands of contractors across the country each month to determine what they charge for labor. The most significant change we observed occurred in the labor cost of a drywall installer/finisher, which increased 9.52 percent since April 2018 and 1.63 percent over the last quarter. 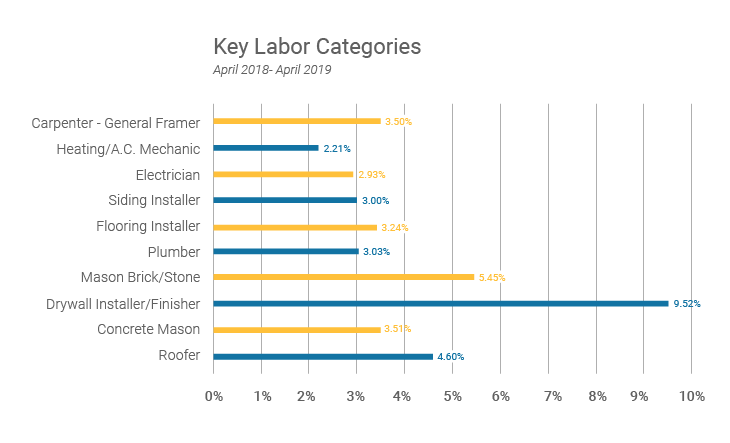 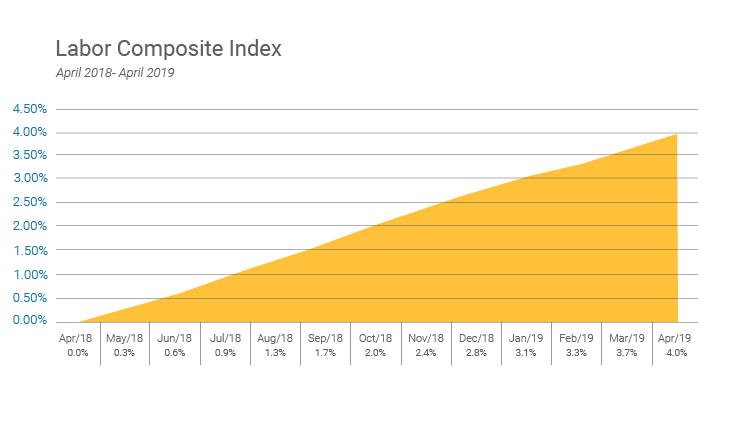 The combined labor and material report is based on monthly building cost data published by Xactware. It comprises a set of commonly used items and may be used as an indicator of trends within the marketplace. The combination of labor and materials makes up the majority of Xactware price list items. Tracking the percent change for the cost of these items provides a good gauge of the general market.

The Combined Labor and Materials report showed a cost increase of 0.87 percent in the first quarter of 2019 and a 2.8 percent increase since April 2018. 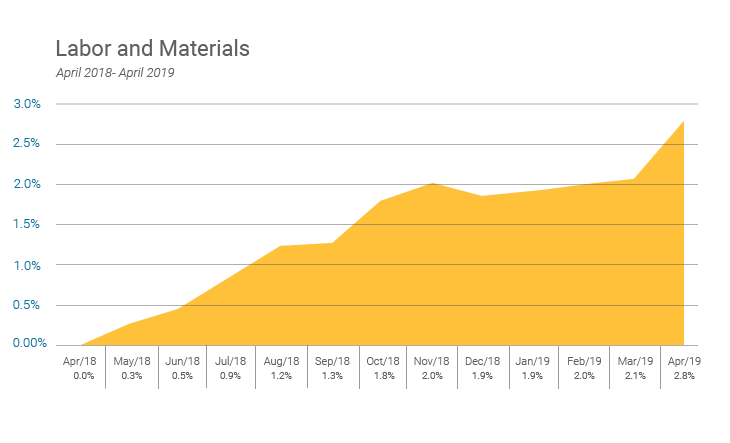 Fuel costs are extremely volatile and are a factor in item pricing. Low oil prices can push down the price of some raw materials. Despite there being only a slight decrease of 0.33 percent from April 2018 to April 2019, prices fluctuated drastically throughout that time. From the beginning of April 2018 to the end of May 2018, prices increased almost 10 percent. However, they began significantly dropping in October 2018 until they reached the lowest rate of the year in January 2019. Prices have been on the rise since then. In fact, over the first quarter of 2019, fuel costs have increased 20.3 percent. 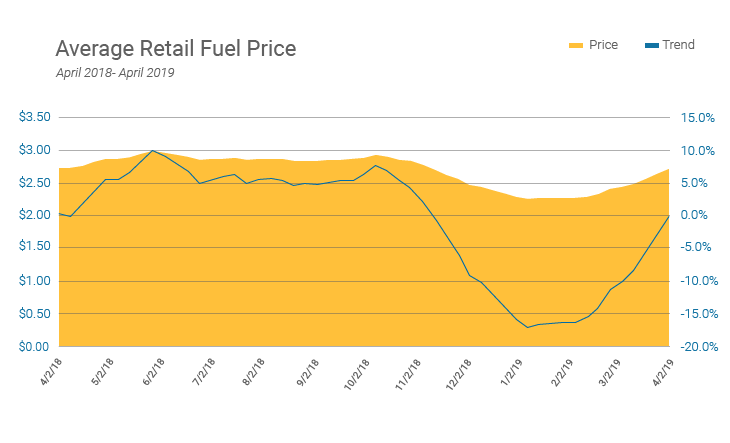 In September 2017, significant tariffs were placed on lumber imported from Canada, which in past years accounted for a third of the U.S. lumber market. Historically, U.S. lumber producers have argued that Canada’s lumber industry is unfairly subsidized. Since most timber in Canada is owned by the provincial governments, the prices charged to harvest the timber are set by the administration rather than by the market, while the U.S. timber is typically owned privately and is subject to the whims of the market. Without Canadian lumber flooding the market and driving down the prices, lumber mills that were once struggling in the U.S. are now thriving. With the decrease in competition, U.S. lumber companies began to charge higher fees for the domestic timber; and as the cost of lumber increases, so does the cost of home building. The National Association of Home Builders reported in June 2018 that “rising lumber prices have added nearly $9,000 to the price of a typical new home and more than $3,000 to the price of a typical multifamily unit.”

The Xactware Industry Trend Report tracks the average cost of lumber materials. After the tariffs were enforced in 2017, there was a 7.4 percent jump in lumber costs from the previous month. Prices continued to climb until July 2018; at that point, prices had increased 21 percent since before the tariffs were imposed.  Since then, lumber prices have decreased every month. However, they have not fallen below where they were in August 2017—before the tariffs—or even below September 2017, the month the tariffs were initially enforced. 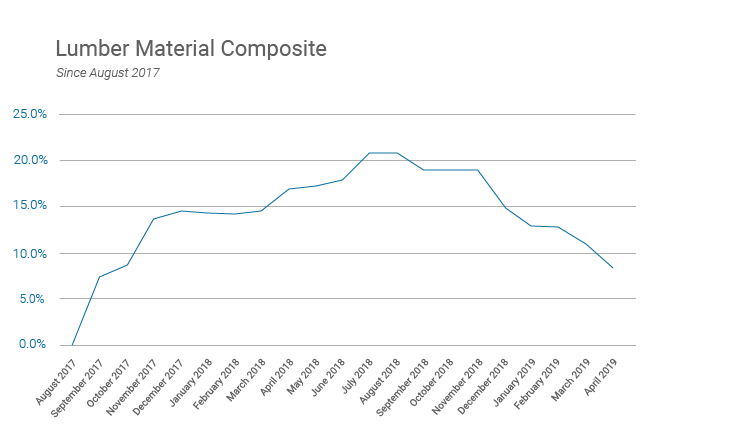 Using Industry Trend Reports, Xactware customers can examine pricing trends on national, state or province, and local levels for key material and labor pricing changes in multiple trades. Trends can be viewed by the month or over extended periods of time. For more information about Xactware’s Industry Trend Reports, or to receive access to them, please contact your sales representative or call 1-800-424-9228.