As a reporter of market-specific pricing information for repairing or rebuilding structures and replacing personal property, Xactware conducts hundreds of thousands of industry surveys and reviews more than 150 million data points per year submitted through field estimates written by contractors and adjusters, as well as electronic data feeds provided by retail merchants. This extensive library of research enables Xactware to provide a comprehensive report of important industry trends.

In the fourth quarter of 2017, Xactware observed changes to several material categories. The most significant change occurred in lumber material costs which increased 5.04 percent over the quarter and 18.21 percent since January 2016.

The drastic annual increase was caused by multiple factors, including a new tariff on lumber imported from Canada to the United States and severe fires in British Columbia. These events decreased the lumber supply, driving up the cost. Xactware is monitoring these factors and will continue to report any resulting pricing changes in future price list publications. 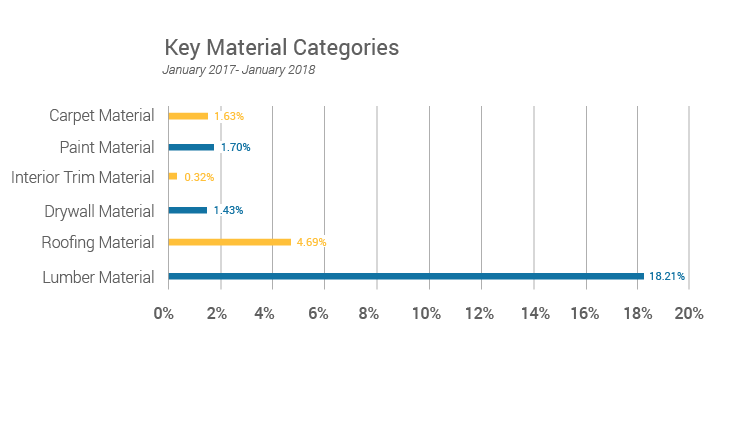 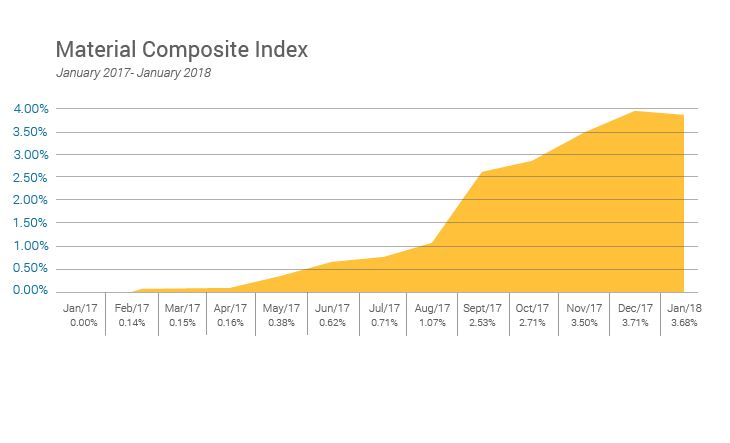 Xactware’s Pricing Data Services also surveys thousands of contractors across the country each month to determine what they charge for labor. The most significant change we observed occurred in the cost of Drywall Installer/Finisher, which increased 8.13 percent since January 2017 and 1.84 percent over the last quarter. 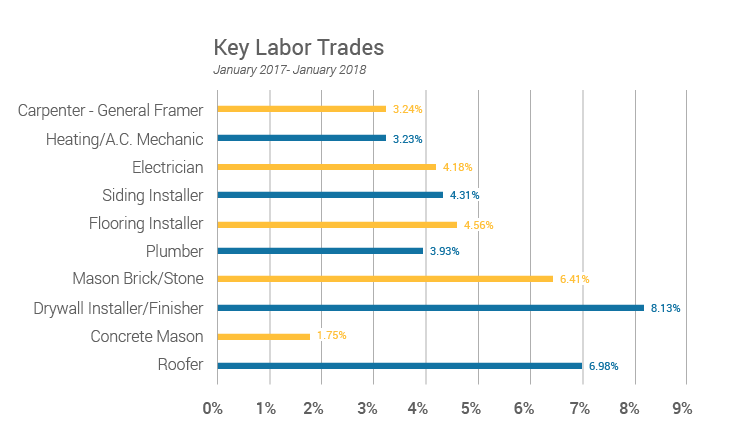 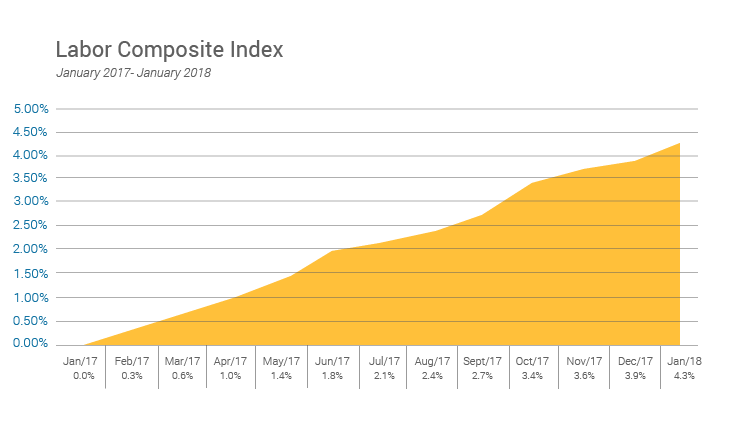 The combined labor and materials report is based on monthly building cost data published by Xactware. It comprises a set of commonly used items and may be used as an indicator of trends within the marketplace. The combination of labor and materials makes up the majority of Xactware price list items. Tracking the percent change for the cost of these items provides a good gauge of the general market.

The Combined Labor and Materials report showed a cost increase of 0.76 percent in the fourth quarter of 2017 and a 4.32 percent increase since January 2017. 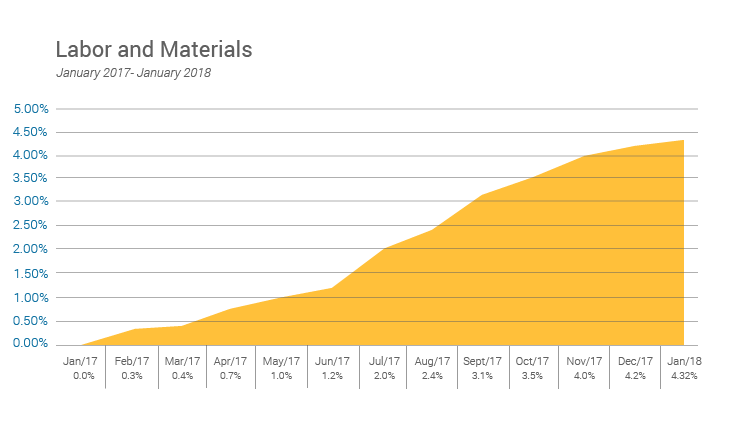 Fuel costs are extremely volatile and are a factor in item pricing. High oil prices can push down the price of some raw materials. Since January 2017, fuel prices increased 6.02 percent; however, they decreased 2.44 percent over the last quarter of 2017.

Fuel costs fluctuated significantly this year. The closure of 8[1] oil refineries in Texas during Hurricane Harvey and its aftermath caused the national gasoline cost average to increase 12.96 percent on September 11. Since that time, costs have gradually decreased, but not enough to balance out the increase seen earlier in the year. 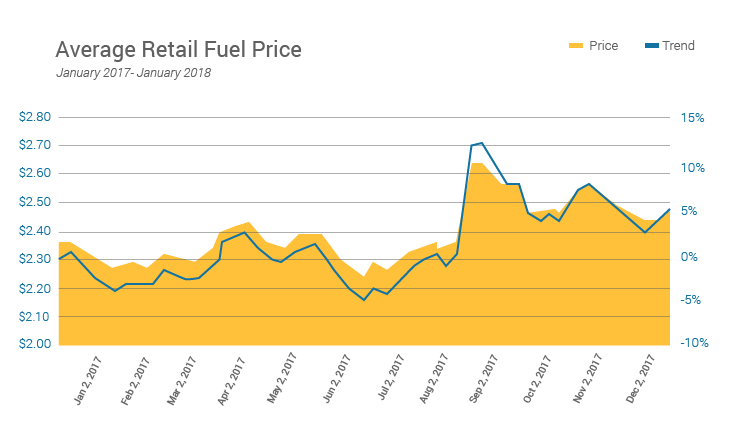 While the California wildfire season has dragged on since April, the last quarter of 2017 saw both the largest and the most destructive fires in California history[1]. The Thomas Fire, which as of publication is still uncontained, has destroyed over 280,000 acres. In October, the Tubbs Fire destroyed 5,643 structures; Santa Rosa Mayor Chris Coursey estimated the fire destroyed 5 percent of the city’s housing stock[2].

Xactware saw a spike of more than 9,600 claims filed in October 2017 in the Santa Rosa area. This is significantly higher than the number of claims filed in the surrounding areas both before and after the fire. 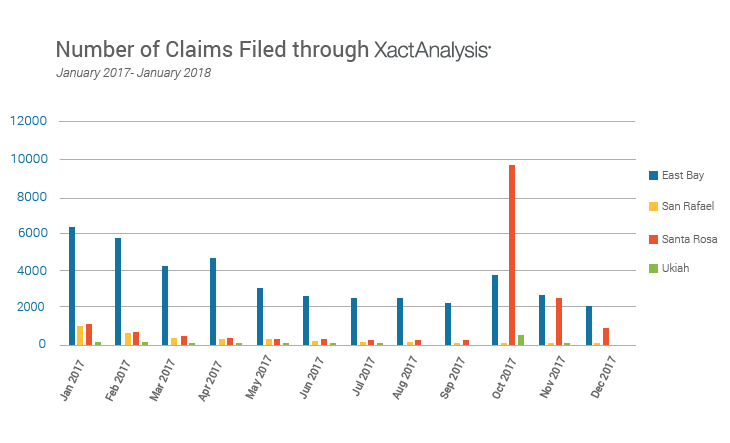 In disaster situations, suppliers try to anticipate the needs and increase inventory to meet demands. However, we find that there can be extreme pressure put on the labor pool in the affected areas so retail labor costs tend to increase. Not enough time has passed for us to determine if this is the case after the Thomas Fire, but it is certainly the case after the Tubbs Fire and the Central LNU Complex.

Since the beginning of the quarter, the retail labor rate in the Santa Rosa price list area (CASO) has increased 5.2 percent. This is significantly higher than the percent change in the surrounding price list areas. 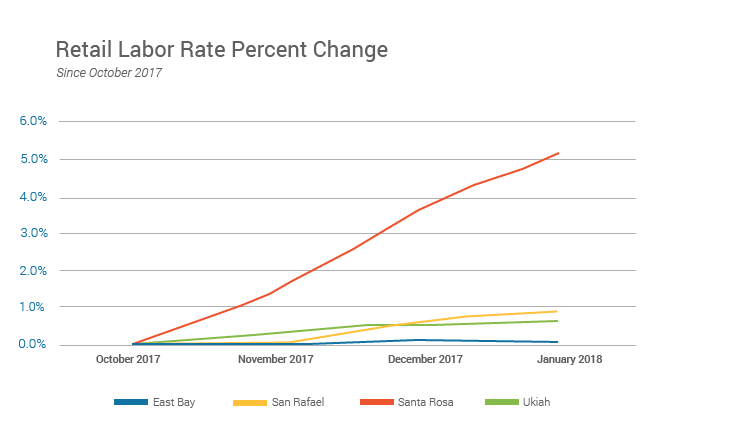 Certain trades experienced higher cost increases than others, while some trades showed no significant change. The labor cost for a painter increased 36.4 percent and the cost for a roofer increased 22.5 percent. We anticipate an increase in labor costs after the Thomas Fire, but we cannot predict the rate of change. 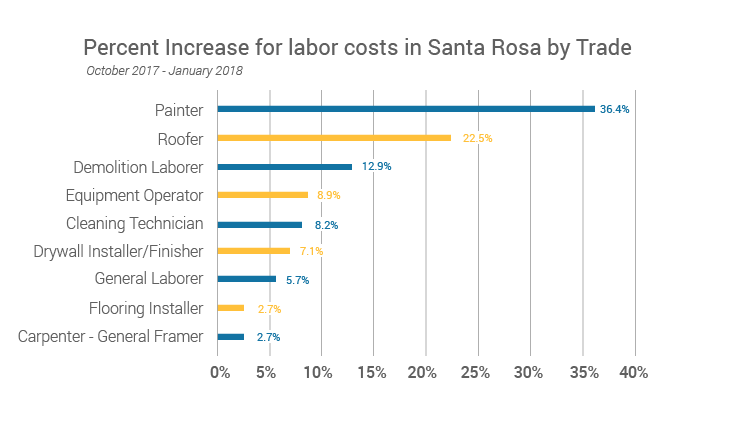 Xactware publishes annual property reports that focus on key trends during the previous calendar year. To order a copy of Xactware’s Property Report for the United States or Canada, please visit the Xactware Online Store.

Using Industry Trend Reports, Xactware customers can examine pricing trends on national, state or province, and local levels for key material and labor pricing changes in multiple trades. Trends can be viewed by the month or over extended periods of time. For more information about Xactware’s Industry Trend Reports, or to receive access to them, please contact your sales representative or call 1-800-424-9228.