The Atlantic hurricane season runs from June 1 to November 30. Although forecasters predict average activity for this year, we’ve already experienced the first tropical event of the season, Hurricane Alex—unusual because it occurred in January. Fortunately, the United States was not affected, and the storm caused little damage when it made landfall in the Azores.

Historically, June is an active month for catastrophe events, with 2012 being the most active in the last decade. Property Claim Services® (PCS®) designated seven events in June of that year, resulting in approximately 700,000 claims and $4.7 billion in insured losses. Two events, CAT 77 and CAT 83, accounted for nearly two-thirds of the total, with $1 billion and $2 billion in insured losses, respectively. In 2015, PCS designated five catastrophes in June, which led to 234,000 claims and $1.7 billion in industrywide losses. Last year, CAT 86 was the largest event, with approximately $914 million in losses.

PCS recently released a new benchmarking study, the PCS Commercial Lines Catastrophe Claims Planning and Response Report. This report details results of a survey on how industry respondents plan for and respond to commercial lines catastrophe claims. For more information or to request the new report, please contact me at 201-469-3144 or tgregory@verisk.com. 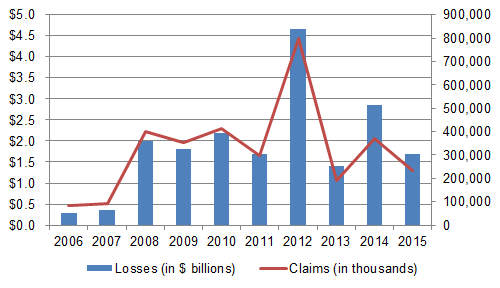