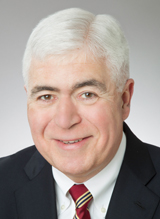 Patrick McLaughlin is senior vice president and chief sustainability officer of Verisk Analytics. Since 2014, he has worked with leadership and employees across the company to create the environmental, social, and governance framework underlying Verisk’s corporate social responsibility program.

Mr. McLaughlin brings many years of Verisk and ISO experience to the position. He began his career in regulatory affairs, then managed client relations, and later served as special assistant to the president during ISO’s conversion to a for-profit company during the mid-1990s. From 1996 to 2008, Mr. McLaughlin and his management team led the financial and operational turnaround of ISO’s national property services business, publishing first-ever public opinion research demonstrating how ISO’s municipal fire grading activities benefit communities throughout the nation. In 2009, he led the company’s Information Systems & Technology operation during the search for a permanent executive.

Mr. McLaughlin is a steward of the Verisk Leadership Institute and regularly serves as a mentor to executives participating in Verisk’s Leadership Excellence Program.