The insurance industry is undergoing a demographic transformation, with retirements looming and an urgent need for new talent to fill the ranks.1 It’s a recruiting challenge of the first order, made more difficult still by the very low awareness among students of career opportunities in the insurance industry.2 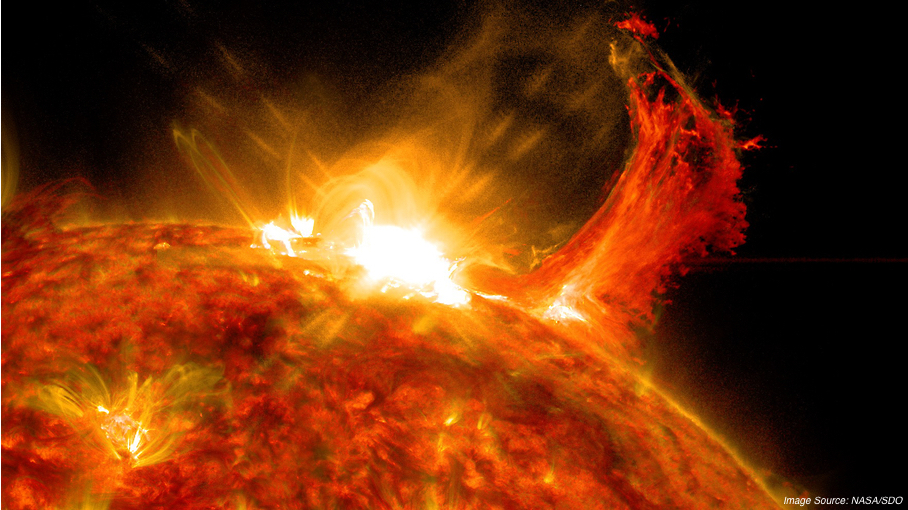 The Verisk Emerging Issues Team collaborated with students and faculty at Illinois State University on a rather explosive topic: Coronal mass ejections.

These collaborations have featured insights on cannabis product labeling, e-sports injuries, the cyber risks of e-scooters, and the dangers of SIM card swapping, among other topics.

The most recent collaboration, with students and faculty at Illinois State University (ISU), focused on a rather explosive topic: Coronal mass ejections.

The staggering costs of a solar eruption

Coronal mass ejections are explosions of charged particles from the Sun. One such eruption, in 1859, packed the power 10 billion atomic bombs.3 At the time, the eruption knocked out telegraphs and illuminated the night sky with auroras so bright that they tricked animals into thinking it was daytime. 4

It sounds cinematic, but if a solar eruption of similar magnitude were to happen today, the ISU students discovered that the results could be catastrophic.

The damage could stretch skyward, too. Satellites buffeted by solar particles could experience failure and systems that rely on satellites, such as global positioning systems and communications networks, could also fail. If satellites in low-Earth orbit are damaged, they could simply fall out of the sky.

As part of their extensive research, the ISU students also estimated the potential insured losses that could follow a coronal ejection and its attendant disruption. Spoiler alert: They’re massive.

Fortunately, forewarned is forearmed, and the student researchers also identified several steps we can take that could mitigate the risk of future solar ejections, such as improving our early detection of such events and hardening the electrical grid to the kinds of electromagnetic pulses produced by those ejections.

To learn more about the potential consequences of a coronal mass ejection for property/casualty insurers, please read “Quantifying the Financial and Insurance Implications of Solar Weather.” If you’re a student or faculty member that wants to learn more about working with the Verisk Emerging Issues team, please email me at Andrew.Blancher@verisk.com.

This article was based on the research conducted by Nutcha Jitchanvichai, Matthew Miller, and Amanda Pinkham of Illinois State University, under the guidance of James Jones, Executive Director, Center for Risk Management, Insurance, and Financial Services.