The Mendocino Complex Fire in Northern California approached 345,000 acres on August 13 after forcing the evacuation of thousands of residents in three counties and destroying 147 homes. The California Department of Forestry and Fire Protection (CAL FIRE) and the U.S. Forest Service were managing two fires—the River Fire and the Ranch Fire—as one incident.

The Los Angeles Times reported that the fire, spanning Colusa, Lake, and Mendocino counties, had become the largest in modern California history. 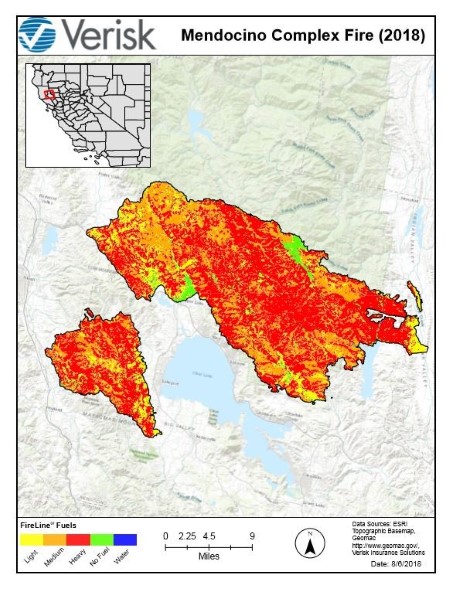 Overall containment was reported at 67 percent as of August 11, with better progress being made against the River Fire at 93 percent versus 59 percent for the much larger Ranch Fire. The latter continued to grow to the northwest amid hot, dry, windy conditions, according to CAL FIRE.

Both fires started within an hour of each other on July 27, and the cause of both is still under investigation. In addition to homes, 118 other structures were destroyed, 27 were damaged, and more than 1,000 additional structures were threatened. 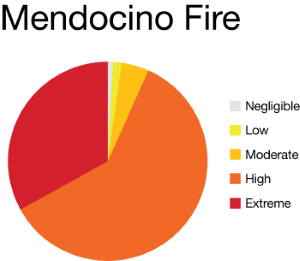 FireLine categorized more than 99 percent of the fire area as at risk, with over 94 percent at high or extreme risk. (See chart.) More than 80 percent of the area was covered with medium to heavy fuels, and nearly 70 percent featured steep or extreme slopes.

Access for firefighters across most of the area is good.