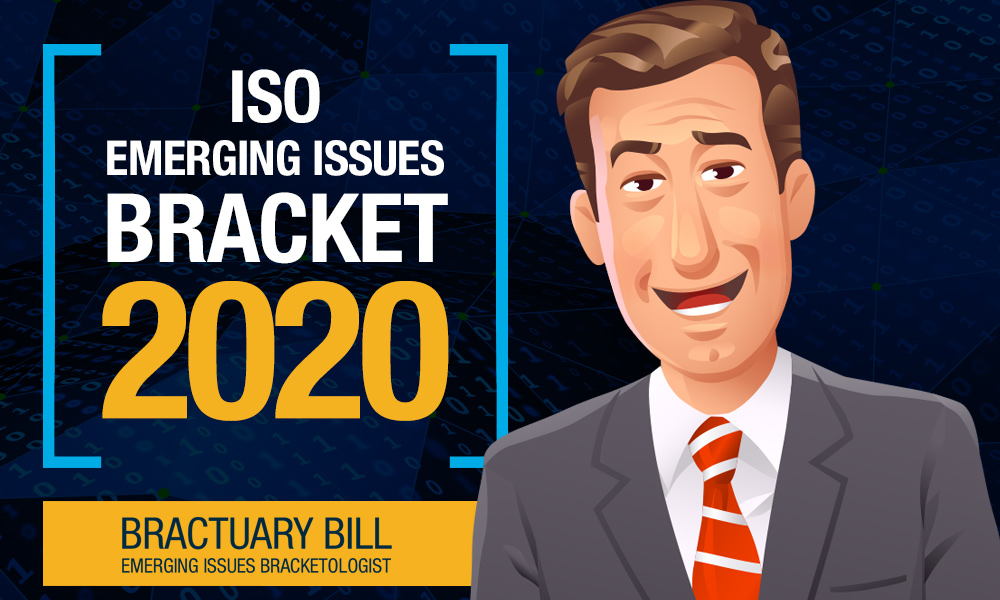 Bractuary Bill, fresh off a long off-season of rest and relaxation, was kind of enough to answer some questions on some key emerging issues before the tournament officially commences.

February is officially upon us, which can only mean one thing… the ISO Emerging Issues bracket tournament is back! And with its return also marks the re-emergence of our star bracketologist, Bractuary Bill.*

Introduced last year, Bractuary Bill (BB) was brought on board to help take the EI bracket tournament, now entering its seventh year, to the next level. The core of the tournament remains the same: what are some of the biggest issues vexing insurance and risk management professionals today? However, thanks to BB, some new twists have been introduced to generate more excitement and insights.

Bractuary Bill, fresh off a long off-season of rest and relaxation, was kind of enough to answer some questions before the tournament officially commences.

David Geller: Welcome back, Bractuary Bill. You’ve missed A LOT in the past year. As you’re catching up on news and putting the bracket together, what are some emerging issues that have caught your attention?

BB: Thanks Dave, it’s good to be back in the game. There’s certainly been a lot for me to digest as I ponder what emerging issues warrant attention based on 2019 developments.

Let’s start with e-cigarettes/vaping. The issue has been on ISO’s radar for several years—for instance, ISO enhanced its Commercial General Liability Program with two optional exclusionary endorsements related to the potential looming risks.

But a spate of illnesses known as e-cigarette, or vaping, product use-associated lung injury (EVALI) that reportedly corresponded with vaping use in 2019 appeared to catapult the issue into the mainstream. From 2016-2019, this issue has failed to advance past the second round. Vaping has reportedly provided long-term concerns, but will the sudden onset of lung injuries in 2019 jumpstart a run to the finals?

Climate change is another topic I feel compelled to keep my eye on. The topic was last year’s Cinderella, advancing to the semi-finals after failing to make it past the second round in all of the prior tournaments. After witnessing that, and being introduced to various new climate-related concepts in Verisk Perspectives, I’m fascinated to see how far they go in 2020. However, bettors should heed that climate change will likely be competing in the same quadrant against other heavy-hitting topics such as cannabis and social inflation. Will they be able to duplicate last year’s run?

DG: Can you take us inside some of the changes in the assembling of the 2020 bracket?

BB: Well, some of the long-time ISO Emerging Issues fans may have noticed the conspicuous absence of the five-time champion Data Breach & Security. Unfortunately, an exhaustive investigation revealed that they were stealing signs from opponents (we probably should have seen that coming) and for that, the topic is indefinitely suspended.

Just kidding! In all seriousness, their removal is actually a reflection of their immense success in prior tournaments—Data Breach & Security is a big issue indeed! But this time around, I wanted to break the team up into several different topics to see which cybersecurity problems were causing the most headaches. Is it ransomware attacks, which are reportedly being launched en masse on hospitals, schools, and municipalities? What about the steadily increasing use of biometrics? Will this serve to exacerbate privacy risks?

These are just a couple of the 2020 teams with cyber implications, and I’m looking forward to seeing which of these issues are chosen to be most flummoxing by our surveyed insurance professionals.

DG: I see that the layout of the bracket itself also has changed…

Good observation, Dave. This year, we have broken up the tournament into four separate categories that each relate to a theme:

Now, in addition to crowning a champion at the end of the tournament, each group of eight will have something at stake as well. But have no fear, we won’t be handing out participation trophies any time soon.

BB: One last thing! For you expert prognosticators out there, don’t forget to make your predictions before the tournament begins. Click here to fill out your sheet and have a chance to win water cooler bragging rights for life.

Also, to ensure that you are able to join the survey to choose your favorites in each matchup, make sure to sign up for the ISO Emerging Issues Weekly Digest. In addition to the seven new articles relating to emerging risks that are distributed each Monday, we plan to include the survey within the e-mail.

For those that do not currently receive the Weekly Digest, you can sign up here.

* Bractuary Bill is a fictitious character. Any resemblance to actual persons, living or dead, or an actual artificial intelligence system is purely coincidental.