2014 catastrophe year in review: Up a little, down a lot

However, the 2014 result is off 33 percent compared with the ten-year average of $22.7 billion. Of course, 2005 took the average significantly higher: U.S. catastrophe events resulted in more than $50 billion in insured losses, about 80 percent of which came from Hurricane Katrina. The nine year average (2006 through 2014) is about $18.3 billion, 20 percent above 2014.

Frequency for 2014 was slightly above the ten-year average of 29.5 events. Over the past ten years, 2014 is one of only five years in which the number of catastrophe events designated by PCS reached at least 30. The most active year of the past decade was 2008, during which PCS designated 37 U.S. catastrophe events.

Catastrophe activity last year affected 38 states, with Texas remaining the most affected, at $2.2 billion. Colorado was next, at $1.7 billion, followed by Illinois and Pennsylvania, both at $1.2 billion. Catastrophe losses in Nebraska edged up above $1.1 billion. Once again, Oklahoma is not among the ten most affected states of the year, despite historically high frequency and severity.

Personal losses accounted for 60 percent of catastrophe losses in 2014, down slightly from 62 percent in 2013. Commercial losses rose slightly from 19 percent to 21 percent, with auto unchanged year over year.

Frequency was up significantly in the fourth quarter of 2014. PCS designated 6 catastrophe events, well over the ten-year average of 3.3. The most active fourth quarter of the past ten years was 2006, during which 6 events occurred, resulting in $1.5 billion in insured losses. The quietest fourth quarters of the past decade came in 2008, 2009, and 2012 — each of which had only 1 PCS-designated catastrophe event. Of course, 2012 stands out for the severity of Superstorm Sandy.

Over the past five years, the average insured loss from a PCS-designated catastrophe event was C$1.5 billion, largely because of 2013’s C$3.2 billion in insured losses. Also, 2011 was quite active, with C$1.6 billion in catastrophe losses. Frequency was down slightly from Canada’s five-year average of 5.8 events, with 2011 the most active year at 7.

Up a little, down a lot 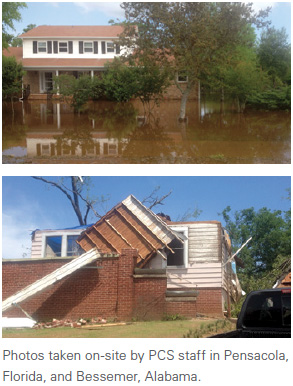 One of the largest catastrophes in 2014 hit 15 states and Washington, D.C., from April 27 to May 1. PCS designated the event as CAT #40, a wave of thunderstorms and resulting tornadoes that caused deaths across multiple states, ripped roofs off houses, and uprooted trees, many of which landed on vehicles, homes, and businesses. Numerous cities across several states also experienced significant hail damage and strong winds. PCS completed its first survey and released a preliminary estimate of loss on May 22, 2014.

Ted Gregory, PCS operations manager, went to Alabama and Florida to assess the damage. He observed downed trees and power lines, damage to commercial structures, and flooding and wind-driven rain damage. Local emergency management and catastrophe adjusters were on-site in affected communities to help families and businesses. PCS monitored the effects of this event through catastrophe resurveys — a process it uses for events that exceed $250 million to resurvey affected insurers to assure accuracy and identify loss components and claim issues. PCS continued the process until it was confident of a fully developed loss estimate. The final estimate, published on July 24, 2014, was $1.1 billion.