2013 year in review: High in catastrophes, low in losses

After a comprehensive review of catastrophe activity, Verisk’s Property Claim Services® (PCS®) will remember 2013 for its lack of major hurricanes and the frequency of thunderstorm activity. Various meteorological sources in the spring and summer of 2013 predicted a high frequency of hurricanes, with multiple major hurricanes hitting the U.S. coast. It simply didn’t happen. 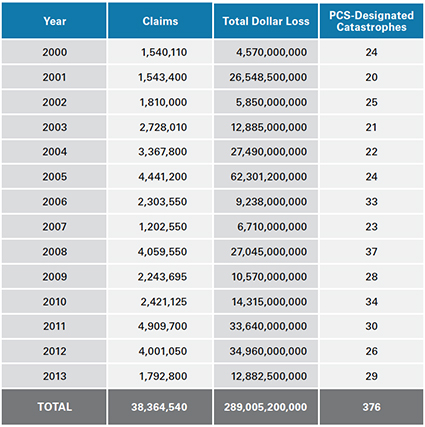 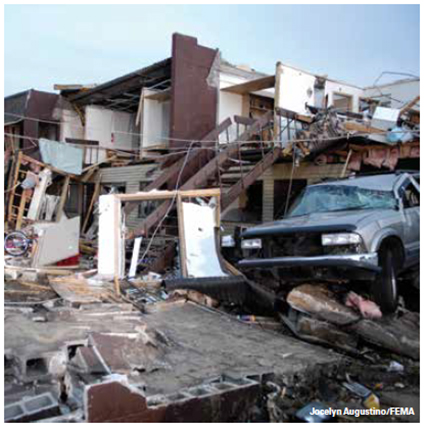 As the map below illustrates, the National Weather Service reports that for the 2013 hurricane season overall, 13 named storms formed in the Atlantic basin, with only two reaching hurricane strength.

There were no major hurricanes in the Atlantic basin for the first time since 1994, and the number of hurricanes in 2013 was the lowest since 1982.

The discussion at the off-season meteorology and insurance conferences will dissect the reasons the strengthening didn’t occur. That’s an important discussion, because the danger in a year with low-severity hurricanes is that the industry and public fall behind in catastrophe planning — or even pricing discipline.

Even though the United States hasn’t seen a major hurricane in eight years, it’s important to remember the potential. We need only look at the Philippines to realize how powerful hurricanes can be and their potential for catastrophic damage.

Typhoon Haiyan, which struck land in early November 2013, was an exceptionally strong storm — in fact, the strongest ever recorded at landfall in terms of wind speed, with one-minute sustained winds as high as 196 mph. It was also the thirtieth named storm of the 2013 Pacific typhoon season. The strongest U.S. storm ever recorded was Hurricane Camille in 1969, with sustained winds of 190 mph.

While the industry may quickly forget the hurricane season, it will remember 2013 for the intensity of thunderstorms and tornadoes that ravaged the Midwest in the spring and produced a rare late-season November event. That scenario will drive extensive discussion to review whether such thunderstorms are indicative of future late-season events.

Of the 29 PCS U.S. catastrophes, 24 were thunderstorms. The year wasn’t slow in terms of frequency. Over the past ten years, PCS has averaged 26.8 events per year. You can see the difference with reduced 2013 severity. While the PCS average is $20.63 billion in annual insured losses, 2013 produced a relatively low $12.8 billion in insured losses. That difference reflects the high-frequency/low-severity trend in the United States for 2013.

In 2013, PCS named 25 states and the District of Columbia in at least one catastrophe designation. Two states, Oklahoma and Texas, suffered insured losses between $1 billion and nearly $2 billion.

The following is a list of the top ten costliest catastrophes declared by PCS. The list remains unchanged from 2012 when we added Sandy. There were no catastrophes in 2013 severe enough to add to the list.

The year had its ups and downs. While the second quarter was an active period, with 13 designated catastrophes and insured losses of $7.2 billion, the fourth quarter was the least active, with a late-season tornado outbreak across several states. Although PCS declared 29 catastrophes, the number of claims was the lowest since 2007. PCS remains committed to serving insurers by identifying catastrophes and providing reliable, objective, and timely catastrophe loss estimates.

PCS, recognized around the world as the property/casualty insurance industry’s authority on catastrophic events in the United States, provides a wide range of services, including catastrophe reporting and catastrophe identification number assignment. Insurers use PCS services as a check on internal company damage estimates in setting loss reserves and as a guide to deployment of field adjusters.

In our continuing effort to add value and provide excellent and timely service, we’re pleased to welcome Ted Gregory to the PCS team as manager, PCS Operations. For more on catastrophe information available from PCS, call 201-469-3126 or email jlouwagie@iso.com.

1. Insured loss and the total number of claims do not include the PCS-declared catastrophe #30, which occurred at the end of December.