The private U.S. property/casualty insurance industry saw its net income after taxes drop to $22.4 billion in nine-months 2017 from $32.1 billion in nine-months 2016—a 30.3 percent decline—and its overall profitability as measured by its annualized rate of return on average policyholders’ surplus fall to 4.2 percent from 6.3 percent, according to the latest report we published with the Property Casualty Insurers Association of America. 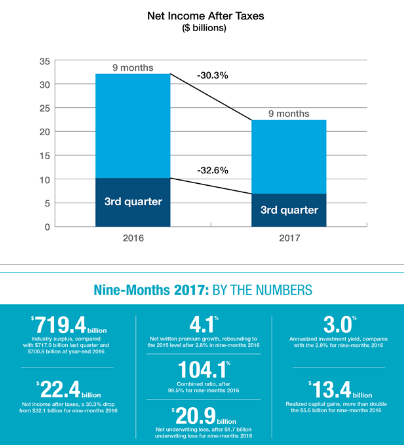 Costs could have been higher

But the costs for insurers could have been much higher if Irma, for example, had taken its predicted track through Miami.

In the years to come, many experts believe that catastrophic events will become more frequent and severe because of climate change. While the industry remains well capitalized and prepared to meet claims, the events have highlighted the need for better analytics to help insurers manage and price catastrophic risk. It’s also illustrated the need for broader coverages, such as flood, to meet the changing needs of communities.

View the full report from ISO and PCI.

Beth Fitzgerald is senior vice president for industry engagement, ISO. You can contact Beth at Beth.Fitzgerald@verisk.com.