With winter underway, we look ahead to January catastrophe event risks. PCS® has designated 17 catastrophes during the month of January between 2008 and 2017. These include nine winter storms and eight wind and thunderstorm events that caused nearly $6.8 billion in insured losses.

The past two Januaries saw the month’s greatest catastrophe frequency since 2008. PCS designated three January events in both 2016 and 2017.

Other January PCS catastrophe events took place in 2008 and 2010.

The following graph illustrates catastrophe activity for the month of January from 2008 to the present in terms of dollar losses and claim volumes. 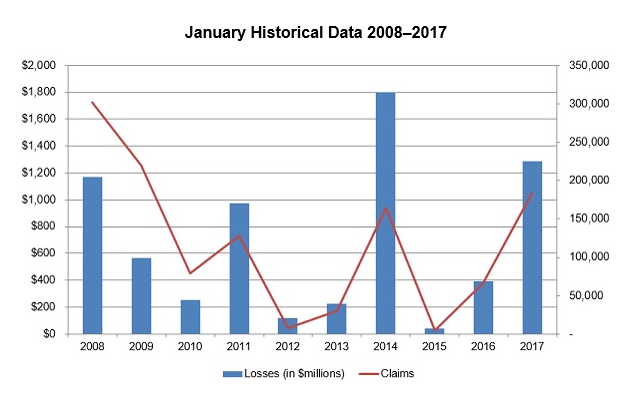 PCS is recognized around the world as the property/casualty insurance industry’s authority on catastrophic events in the United States. In addition to providing a wide range of services to subscribers in the United States, PCS maintains contact with industry representatives in many foreign cities and Bermuda.