The fire, which started around 1 p.m. on August 24, caused no reported injuries, but its location southwest of the town of Alcova in Natrona County triggered evacuations and road closures, including a large county road east of the fire, according to information from InciWeb, an interagency incident information management system. The Casper Star-Tribune reported that the structures destroyed were classified as permanent or seasonal homes and outbuildings. Lightning was believed by authorities to be the cause of the fire. 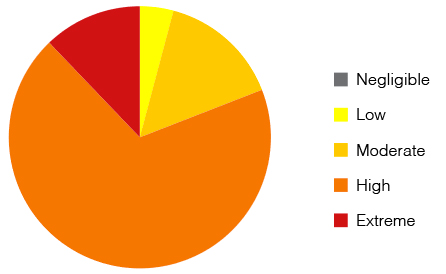 More than 80 percent of the fire area was at high or extreme risk.

As of September 2, the fire was 37 percent contained, with 364 firefighters on the scene, InciWeb reported.

FireLine®, Verisk’s wildfire risk management tool, is guiding the analysis of risk factors seen within and around the Pedro Mountain Fire’s perimeter.

Verisk  determined that areas considered to be at high to extreme risk accounted for more than 80 percent of the total fire area. The fire is located partially within Natrona County, which ranks second in the state by number of housing units in the high or extreme wildfire risk categories, according to the FireLine State Risk Report for Wyoming.

About two-thirds of the fire area contained medium to heavy fuels, and nearly 85 percent consisted of moderate to extreme slopes. Access for firefighters was generally good. View the FireLine heat map of the Pedro Mountain Fire.

Layheab Ly is a geospatial big data intern at Verisk. She can be reached at Layheab.Ly@verisk.com.