The summer of 2015 was a season of wildfire devastation for Northern California. In September alone, two fires in Northern California—the Butte and Valley Fires—burned through nearly 147,000 acres and set 1,600 properties ablaze. The two fires are among the most damaging in California history, based on the number of structures burned.

The Valley Fire could become one of the top five costliest wildfires in California history and may cause the largest losses since 2007. While the final numbers aren’t yet available, industry estimates put combined insured losses for both fires at more than $1.1 billion.

Although wildfire losses are impossible to predict, you can price wildfire risk accurately and manage exposure concentrations. By knowing the primary risk attributes—fuel, slope, and access—for each property’s location, you can limit exposure to levels that match your risk tolerance.

We used FireLine®—Verisk’s wildfire risk management tool—to analyze how many burned properties were located in high-, medium- and low-risk areas. FireLine identified 98 percent of the Butte properties and 99 percent of the Valley properties burned as exposed to the wildfire hazard. Here’s a closer look at the findings:

The Butte Fire began September 9, 2015, in Amador County. It spread to Calaveras County, burned nearly 70,900 acres, and destroyed more than 600 properties including 863 structures by the time it was contained on October 1. The Butte Fire is the seventh-worst in California history based on total structures damaged or destroyed.

FireLine shows that the area is highly conducive to the spread of wildfire and that the topography makes firefighting very difficult. The FireLine analysis determined that 82 percent of properties damaged or destroyed in the fire had slope challenges and 29 percent were located in areas with road access issues. 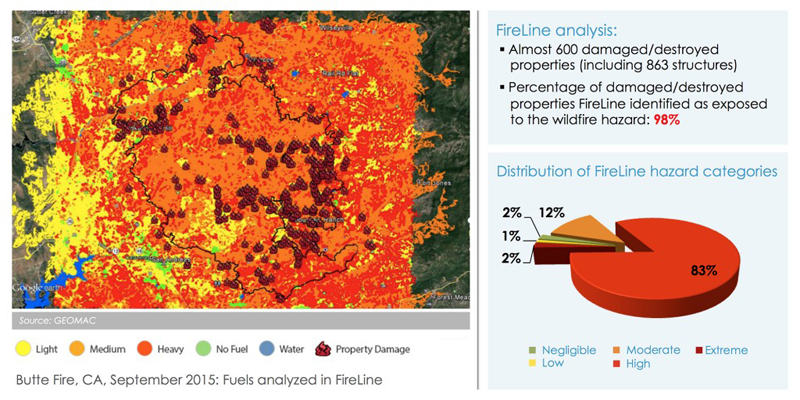 The Valley fire started burning on September 12, 2015, in Lake County, California and spread to Napa and Sonoma counties. By the time it was contained on October 6, the fire had burned more than 76,000 acres and damaged or destroyed more than 1,000 properties including nearly 2,000 structures. The Valley Fire is the third most damaging in California history.

FireLine determined that 69 percent of the properties burned were on sloped terrain and 31 percent were located in areas with road access issues. 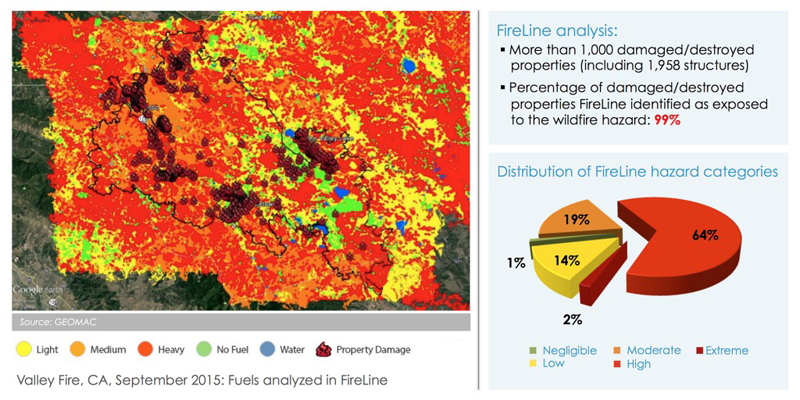