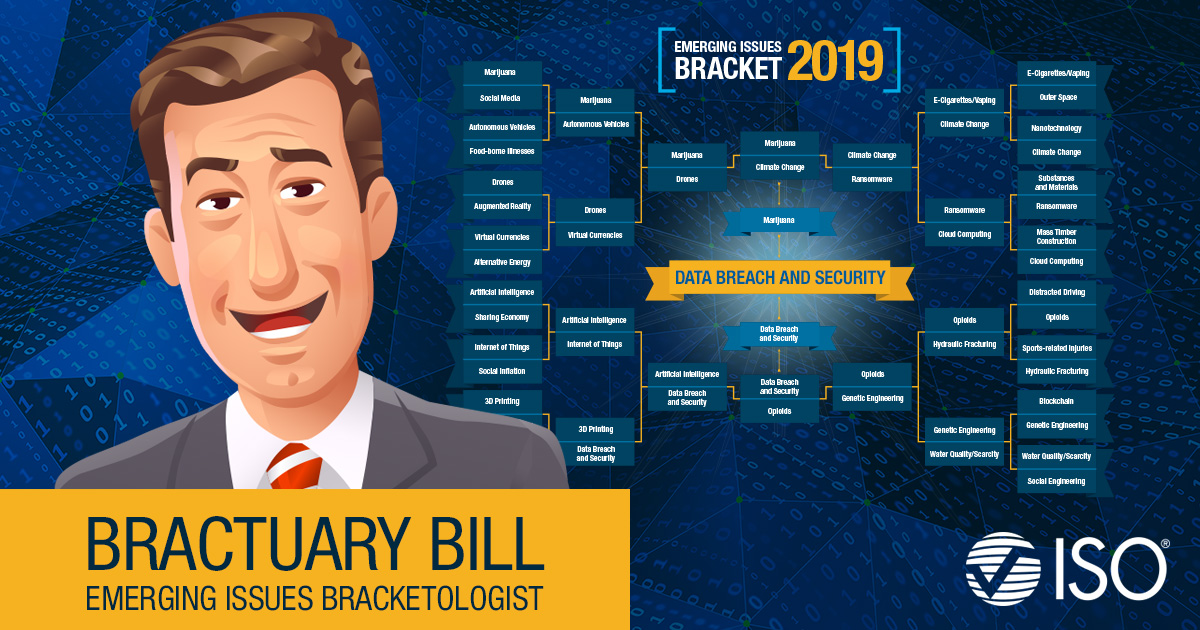 Another year in the books! And another championship for Data Breach & Security. The Michael Jordan of emerging issues appears to be showing no signs of slowing down.

Our new pal Bractuary Bill was kind enough to join us again to discuss another exciting (and enlightening) Emerging Issues bracket tournament.

For those of you who missed it, Bractuary Bill was introduced in February at the inception of the 2019 tournament. He is ISO’s part robot*, part actuary, all awesome Emerging Issues bracketologist.

David Geller: Bractuary Bill—good to have you back. Data Breach & Security winning its fifth Emerging Issues title in six years was probably a surprise to nobody—but was there any development that made you do a double take?

Bractuary Bill: The emerging issues winds of change are swirling—and Climate Change rode it all the way to the semi-finals! In the last few years Climate Change went down quietly and never made it past the second round. This year? They defeated the fascinating Nanotechnology, the controversial E-cigarettes/vaping, and the costly Ransomware.

What gives? Are Northeastern and Midwestern residents fed up with the Polar Vortex, which according to reports could potentially become a more frequent occurrence in the coming years? Have the back-to-back years of reported catastrophic wildfires in California raised more alarm bells?

It’s tough to say, Dave. Climate Change appears to be an evolving subject and there are many factors at play. But this year more than ever, emerging issues followers have spoken, and Climate Change was the 2019 Emerging Issues Cinderella story because of it.

DG: I understand one particular matchup has garnered a lot of attention…

However, take solace in this, E-scooter fans. The stars may be aligning to make this reportedly popular transportation method an emerging issues force to be reckoned with in the near future. Here are just a few developments that have transpired in the last half year:

DG: Thanks Bractuary Bill. Even though the bracket results may not have shown it, it appears that the E-scooter story is just beginning.

What else did you learn from this year’s tournament?

BB: Not that I didn’t already know this, but insurance professionals can be quite funny. Take a look at some replies that made us chuckle for suggested topics moving forward:

I’m not sure how I should feel about the last one…but all promo is good promo right?!

DG: Whatever you say BB.

It’s always good to keep the class clowns around to keep things light, but I’d be remiss if I didn’t acknowledge some of the more serious suggestions that were sent our way, issues that the EI team will keep our eyes on moving forward! Here is a sample:

Thanks again for all of your support, and we look forward to seeing you at the same time next year!

*Bractuary Bill is a fictitious character. Any resemblance to actual persons, living or dead, or an actual artificial intelligence system is purely coincidental.

The future of drones is up in the air: Consider the risks carefully

The growth of litigation funding and its potential effects on commercial auto insurance: Part one