An updated Verisk analysis shows that the elevated personal auto claim frequency and severity that emerged in 2014 and continued into 2015 did not subside in 2016. As measured by two common types of property damage losses—liability property damage and collision physical damage—accident frequency has returned to prerecession levels and, in the case of collision, experienced a slight uptick last year.

With the insurance industry facing ever-tighter margins, this Verisk analysis looks at key factors affecting those changes, as well as their potential implications for policyholders and insurers. 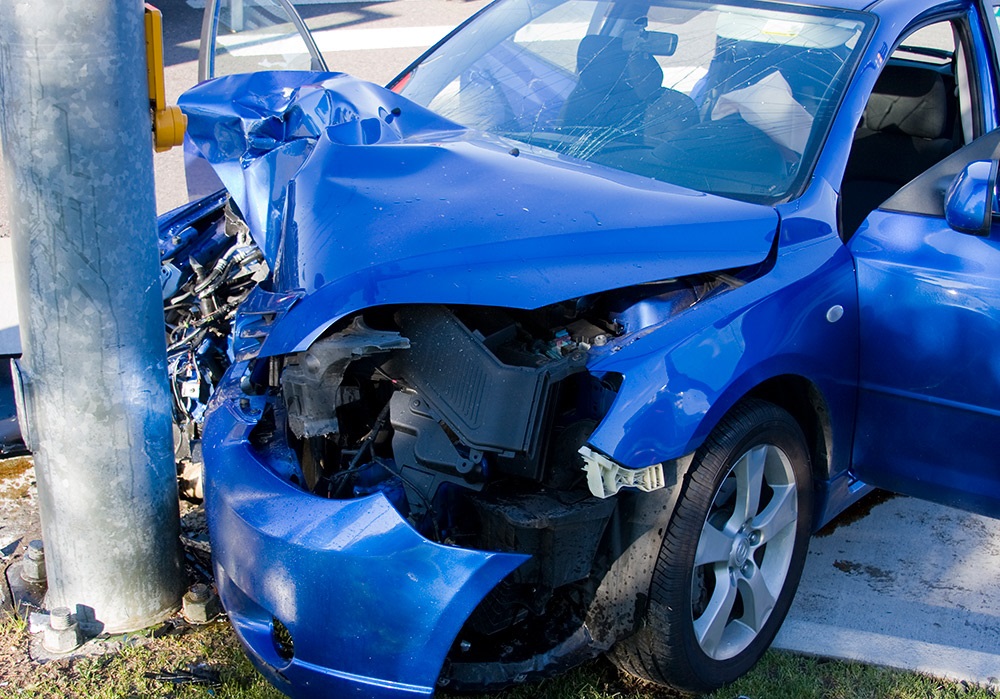 Since the early 1980s, miles driven by U.S. drivers had been climbing steadily. But the Great Recession of 2008 brought an unprecedented decline in mileage exposure. The downturn in aggregate miles outlasted the recession, lingering until 2012 before drivers’ mileage began to rise again.

As the economy improves and gas prices decrease, the trend is more cars on the roads and people driving more often. Miles driven set new records in 2016. On a seasonally adjusted basis, that number continued to climb even higher in 2017, approaching 3.2 trillion miles annually.

The increase in miles driven carries an unfortunate component. Accident frequency is at its highest level in a decade, rising steeply in 2014 and 2015 in strong correlation with the spike in miles driven—and bringing with it shrinking margins for auto insurers. To demonstrate this trend, Verisk examined two common non–bodily injury coverage types of losses for property damage: liability property damage and collision physical damage. For both categories, the rise in frequency mirrors the increase in miles driven. 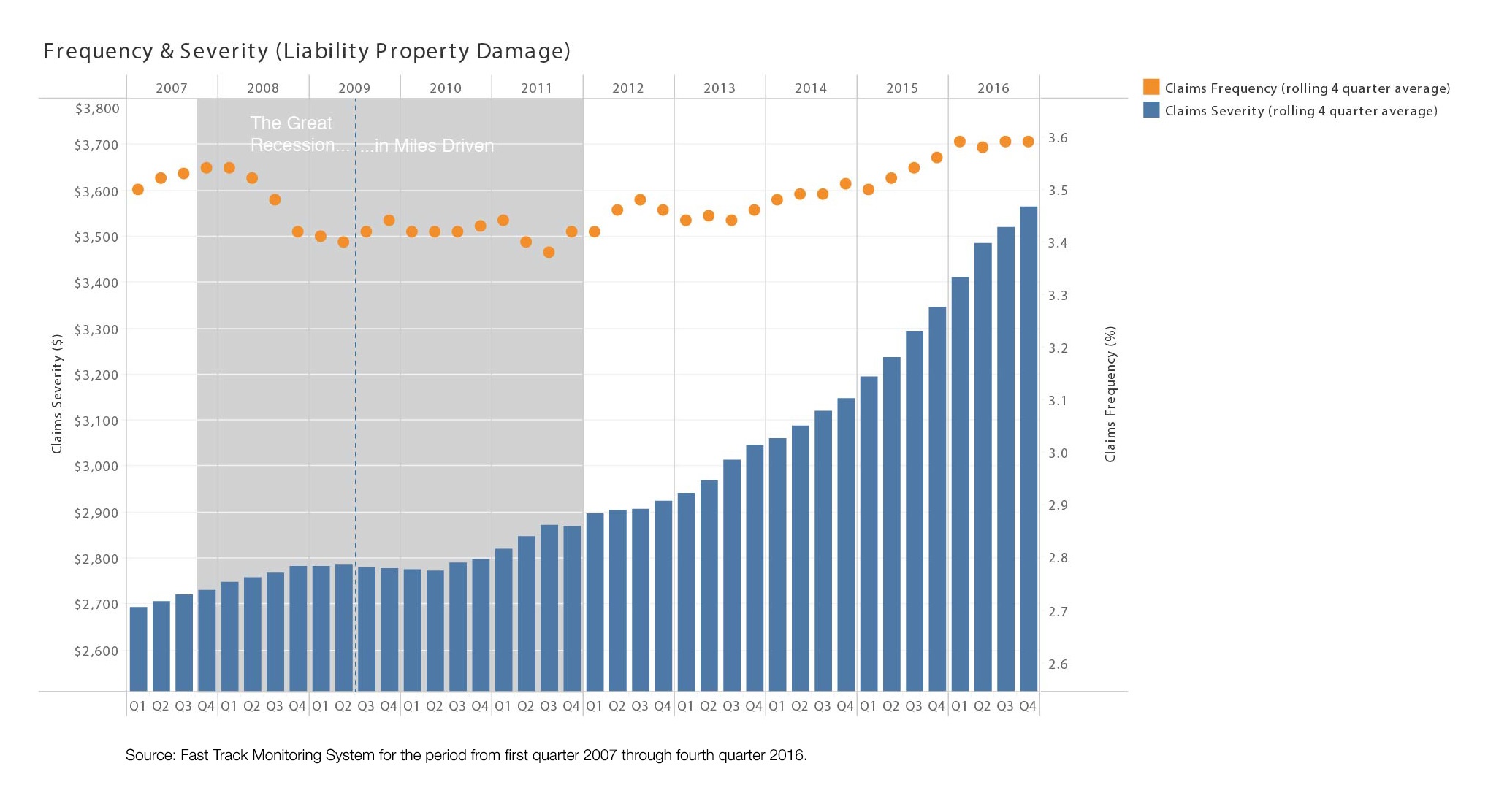 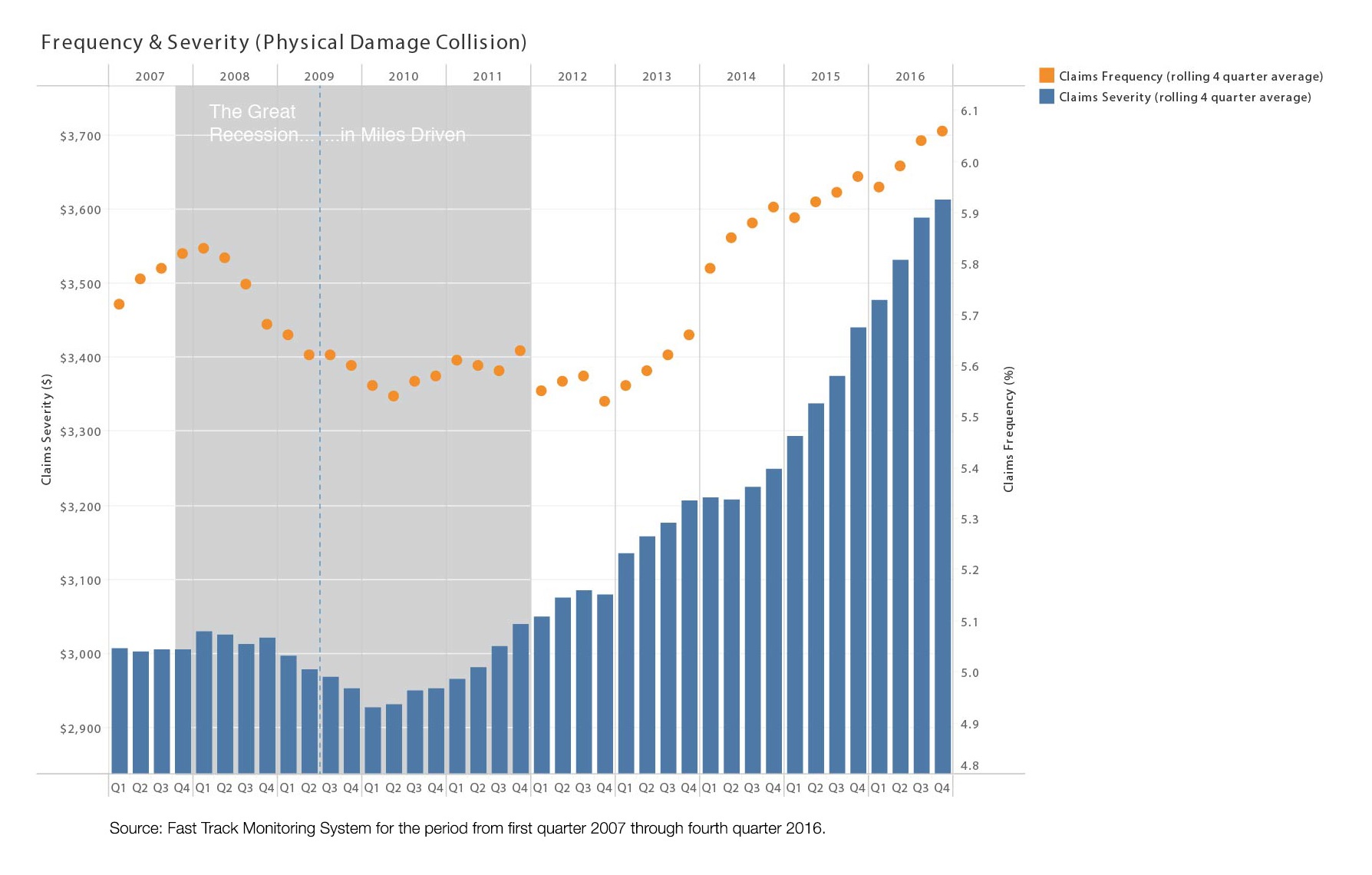 As demonstrated in the above graphs, as of the end of 2016, frequency for property damage held nearly steady at 3.59 percent, while frequency for collision climbed slightly to 6.06 percent. Amid the recession and the resulting drop in miles driven that lasted through 2011, many auto insurers generally benefited from frequency rates that were on average almost 0.19 points lower for property damage and almost 0.45 points lower for collision than today’s rates. Multiplied across millions of policies, this dip in frequency—in combination with stable or lowered severity—contributed to insurers keeping premium increases relatively flat in a competitive market.

It isn’t clear why frequency for property damage leveled off in 2016, while for collision it continued a slight upward trend. One possible explanation is that the age distribution of cars is trending toward more new and more very old cars. An accident with a newer car will likely lead to a collision claim. But because the payout is lower for a totaled vehicle, a single-car accident in a very old car may give less incentive for filing a property damage claim.

To account for seasonality, a rolling average of the last four quarters was used for measures of frequency and severity. 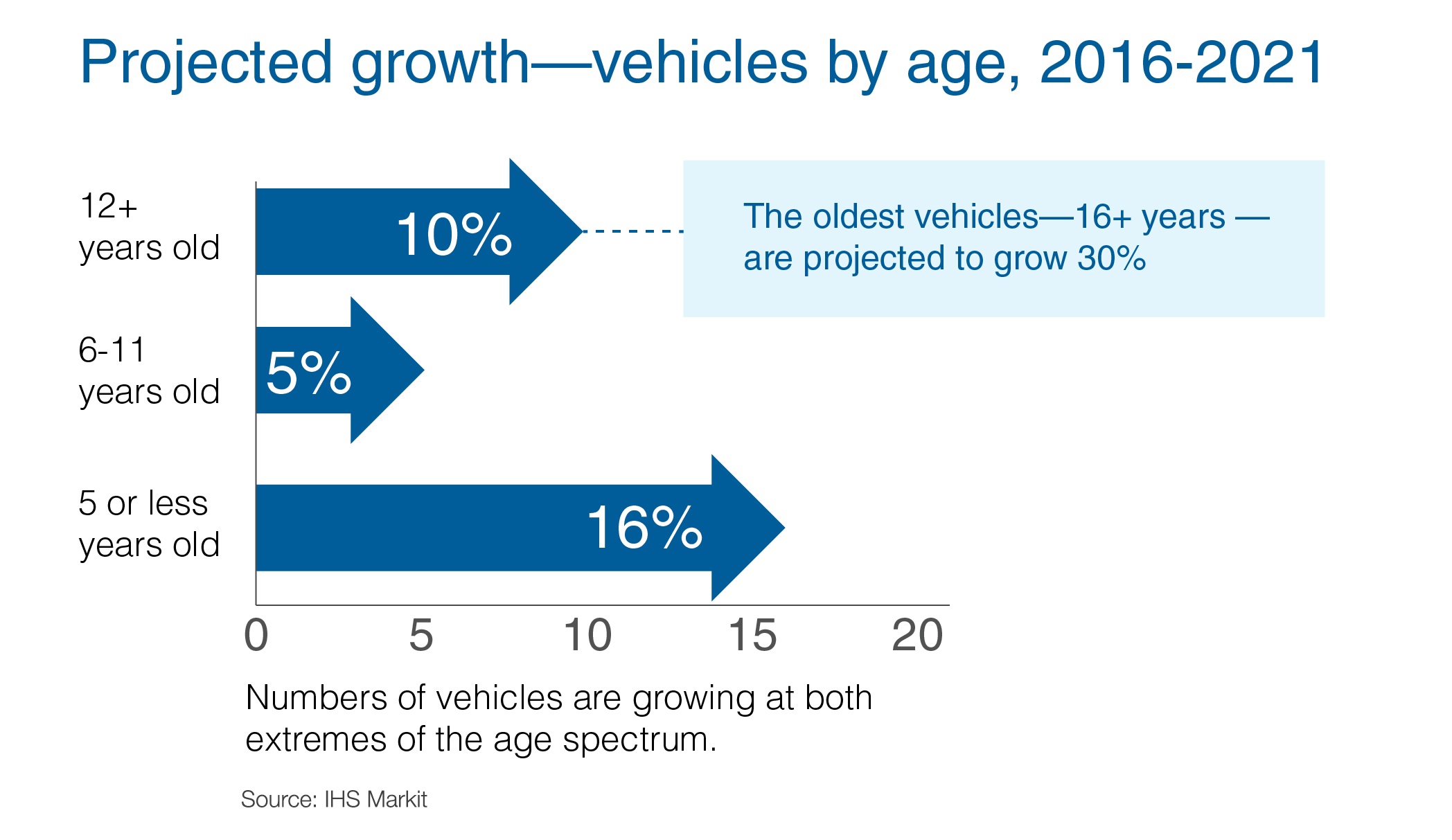 A surge in severity

IHS Markit data shows a growing dichotomy in the age of vehicles on the road. Vehicles in the new-to-5-years-old category are projected to grow 16 percent by 2021, while vehicles 6 to 11 years old will grow just 5 percent, and 12 years or older will increase 10 percent. The oldest vehicles—16 years and older—are increasing the fastest and are expected to grow 30 percent from 62 million in 2016 to 81 million in 2021. IHS Markit also estimates that more than 20 million vehicles on the road in 2021 will pass the quarter-century mark in age.

But it’s the revitalized market for new cars, with their ever more expensive safety technology, that’s helping propel severity to new records (see Auto physical damage costs reveal the price of safety). Since 2007, severity for collision increased at an average annual rate of 1.68 percent, but that rate has been accelerating since 2012, averaging more than 4 percent annually in recent years. The severity problem could be even worse if insurers weren’t opting to “total” more vehicles in light of rising repair costs.1

For bodily injury, a number of factors can influence the likelihood of injury. For example, misalignment of bumpers between passenger cars and sport utility vehicles may raise the risk, while the improving safety features of modern vehicles are often a mitigating factor. The frequency of bodily injury claims has been relatively stable before and after the recession, but severity continues to rise. While bodily injury has had a significant impact on profitability for years, the rise in frequency and severity on the physical damage side is exacerbating the impact on margins across the industry.

Deaths per 100 million miles driven had been declining markedly since the mid-1930s, from 15 to just over one. In 2015, this trend reversed, and the National Safety Council (NSC) reported an 8 percent spike in road fatalities between 2014 and 2015, the largest increase in 50 years. A further 6 percent increase was estimated for 2016, based on preliminary data.

Here are some potential contributing factors:

The Fast Track Monitoring System’s experience for the five years through 2016 provides a deeper examination of frequency and severity factors related to distracted driving and the mix of structurally different cars, light trucks, and SUVs on the road.

Pushing past the pain

Auto insurance claim frequency has reached or exceeded prerecession levels, and severity has hit an all-time high. This is a pain point for the industry that correlates with many insurers raising premiums. But these trends could hardly come at a worse time, since they meet a broader disruption in the industry.

Trends are converging to create a new reality for insurers. In addition to the squeeze on margins from frequency and severity, application integrity has eroded by more than 15 percent, as noted in the Verisk Innovation Paper, Application Integrity: The Whole Truth. Only one in five premium dollars now belongs to insurers that are growing profitably.

But there are tools available to tackle these problems. Insurers have access to a number of innovative solutions that can better align risk and premium and keep them aligned over time:

Mileage solutions: Since underestimated mileage accounts for more than 18 percent of leakage and is strongly correlated with frequency, accurately determining the miles a vehicle will be driven and maintaining this record over the life of a policy can help stem rising underwriting losses. Many new tools, including sophisticated analytics, smartphone apps, telematics, and connected-car data, can help empower insurers to underwrite and rate more precisely. Collecting mileage at point of sale and over time allows for refined rating.

Rating symbol models: Using predictive modeling that accounts for frequency and severity by make and model can help insurers adjust to the higher costs of repair for modern automobile technology. Solutions are under development to provide more granular symbols based on manufacturers’ build sheet data.

Loss history indicators and driver monitoring solutions: The increase in frequency and severity means insurers will see more shopping from prospective customers who are dissatisfied with rate increases stemming from a hardening market. Loss history indicators and driver monitoring are cost-effective solutions that can identify up front in the quote workflow if recent claims or violations are an issue.

Prioritized pursuit: At point of sale and renewal, Verisk can help insurers with sophisticated risk scores and projected losses for drivers and vehicle types (for example, a safe driver with a minor infraction or a vehicle with a branded title) to help inform decisions that balance short-term premium pursuit against potential lifetime policyholder profits.

2. At the time of publication, data was not yet available to measure the impact of vehicle registrations for 2016.

Kathy Olcese is vice president of auto product management for Verisk – insurance solutions–Underwriting.  She can be reached at Kathy.Olcese@verisk.com.

Dorothy Kelly is Vice President of product management for ISO Personal Lines at Verisk. She can be reached at dkelly@verisk.com.