A record year for civil unrest in the United States

The United States is no stranger to periods of often intense civil unrest. From the 1907 “Bellingham Riots” to the fractious tumult of the civil rights and Vietnam era, U.S. history is littered with bouts of violent upheaval.1,2

But 2020 appears to be one for the record books. 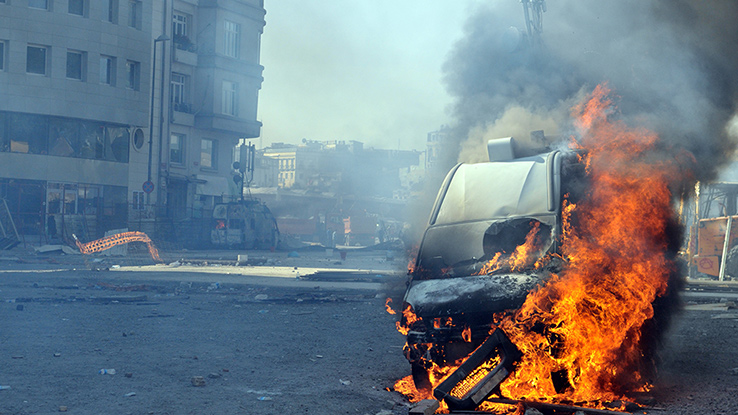 Fueled by a destabilizing mix of police violence, armed confrontations between citizens, protests, riots, and a rampaging pandemic, the United States recorded one of the largest deteriorations on the Verisk Maplecroft Civil Unrest Index over the past year.

Fueled by a destabilizing mix of police violence, armed confrontations between citizens, protests, riots, and a rampaging pandemic, the United States recorded one of the largest deteriorations on the Verisk Maplecroft Civil Unrest Index over the past year—leapfrogging from the 91st riskiest jurisdiction by the second quarter of 2020 to the 34th by the fourth quarter of 2020. The index assesses the risk of disruption to business caused by the mobilization of societal groups in response to economic, political, or social factors. It includes a spectrum of incidents of unrest, from protests to violent mass demonstrations and rioting.

While the year isn’t over, this unrest has already resulted in record-setting insured losses. According to Verisk Property Claims Services (PCS), cumulative insured losses from civil unrest in the United States are estimated to top $2 billion in 2020, making it the costliest year for these kinds of losses since PCS record keeping began.

Settling into a more turbulent baseline

Despite a sharp increase in unrest, the United States should see its standing on the Civil Unrest Index improve starting in the second quarter of 2021. A projected economic recovery, control over the pandemic, and a defusing of tensions built up around the 2020 election are expected to contribute to stabilizing the environment.

But even as protest rates are likely to remain broadly stable between the second quarter of 2021 and the fourth quarter of 2022, they are unlikely to fall back to pre-2020 levels, likely keeping the United States firmly within the high-risk category on our Civil Unrest Index.

Acute levels of political and social polarization, coupled with the scope for a deterioration in the macroeconomic environment, will likely continue to spur civil unrest risks. The lingering effects of repeated airings of allegations of voter fraud from the 2020 election are likely to fuel portions of the electorate to question the legitimacy of the election results, raising the scope for civil unrest incidents through 2021.

We explore U.S. and global unrest trends in the latest edition of Verisk Perspectives. Complimentary access to the report is available here.

Miha Hribernik is principal analyst, risk insight, at Verisk Maplecroft. Miha can be reached at miha.hribernik@maplecroft.com.