Since emerging as a tropical wave in the Eastern Caribbean Sea the week of August 22, Verisk’s Weather Team has been tracking what would develop into the rapidly intensifying category 4 storm impacting the Louisiana coastline by August 29.

Ida officially made landfall midday Sunday near Port Fourchon, LA with 150 mph sustained winds. During the evening hours, Ida weakened to a Category 3 hurricane as it moved northward, the center of the system passing only about 25-30 miles west of New Orleans. During the first half of the overnight, as the center of Ida passed about 30 miles east of Baton Rouge, Ida further weakened to a Category 2 and then a Category 1 hurricane. Early on Monday morning, August 30, Ida officially weakened to a tropical storm as the cyclone moved near the border of Louisiana and southwestern Mississippi.

The resulting losses from Hurricane Ida’s winds and storm surge will range from $17 billion to $25 billion, according to Verisk’s AIR Worldwide, an extreme event modeling firm. The modeled insured loss estimates include physical property damage—both structures and contents—and increased demand for material and other repair costs.

Verisk analytics indicate that 164,472 buildings sustained max winds of 80 mph or above from Hurricane Ida. This number climbs to 794,318 structures when it comes to max wind gusts above 80 mph. 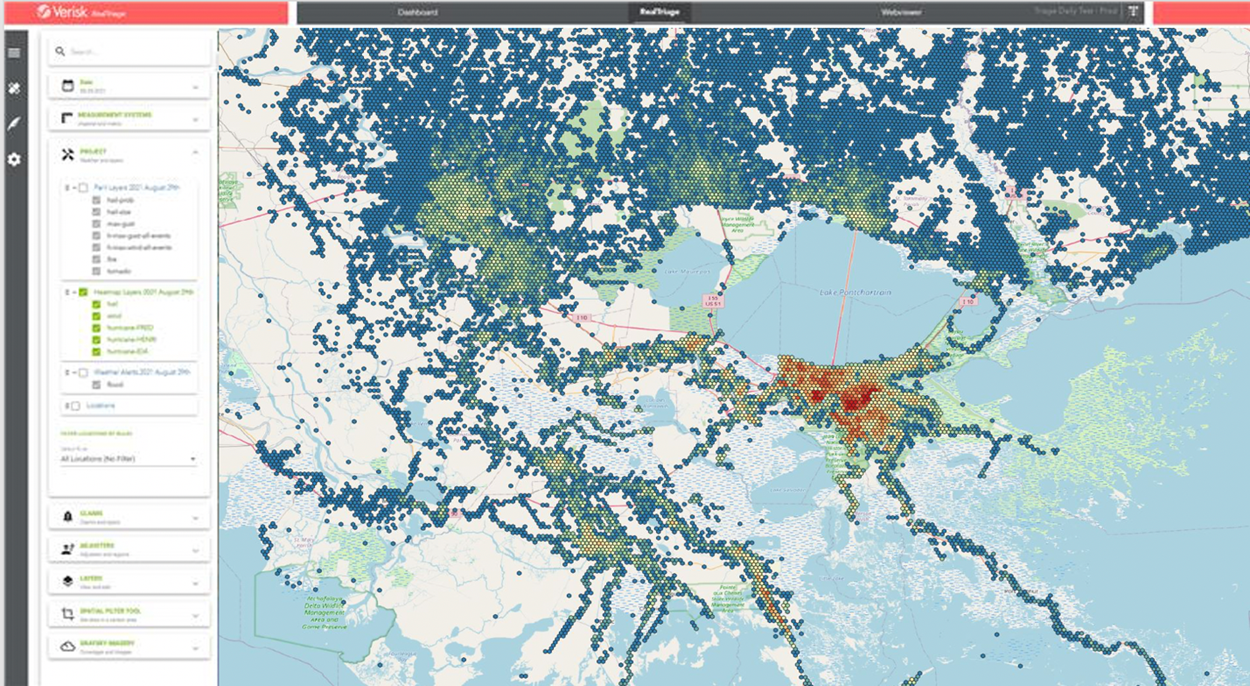 The Geospatial Insurance Consortium (GIC) has deployed planes in response to Hurricane Ida and is collecting hi-res oblique and ortho aerial imagery of impacted areas to provide insight about the catastrophe.

GIC members can now begin to access to this post-storm aerial imagery which can be superimposed and compared to weather and structural data in RealTriage.

This graph shows the top states that were impacted by Hurricane Ida. Claims shown have a loss date of August 29th, 2021, or later.

This graph shows the top losses by states for claims under personal property homeowners. 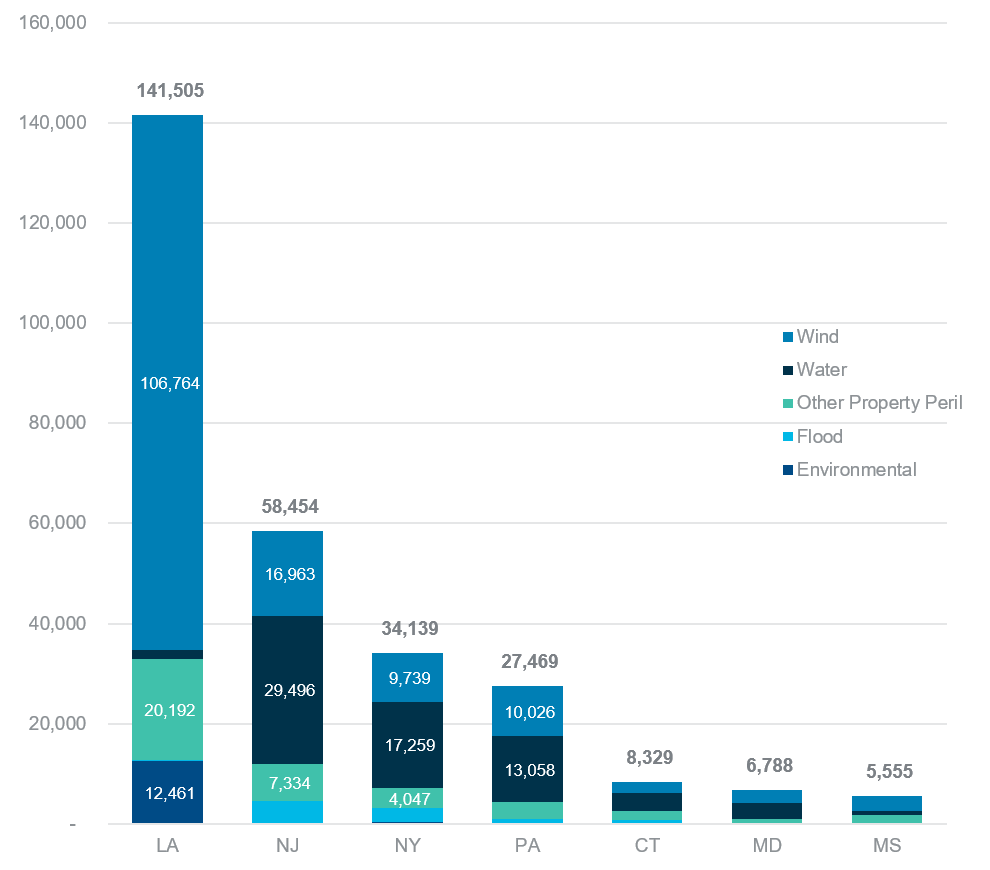 This graph shows the top losses for claims under personal property homeowners. 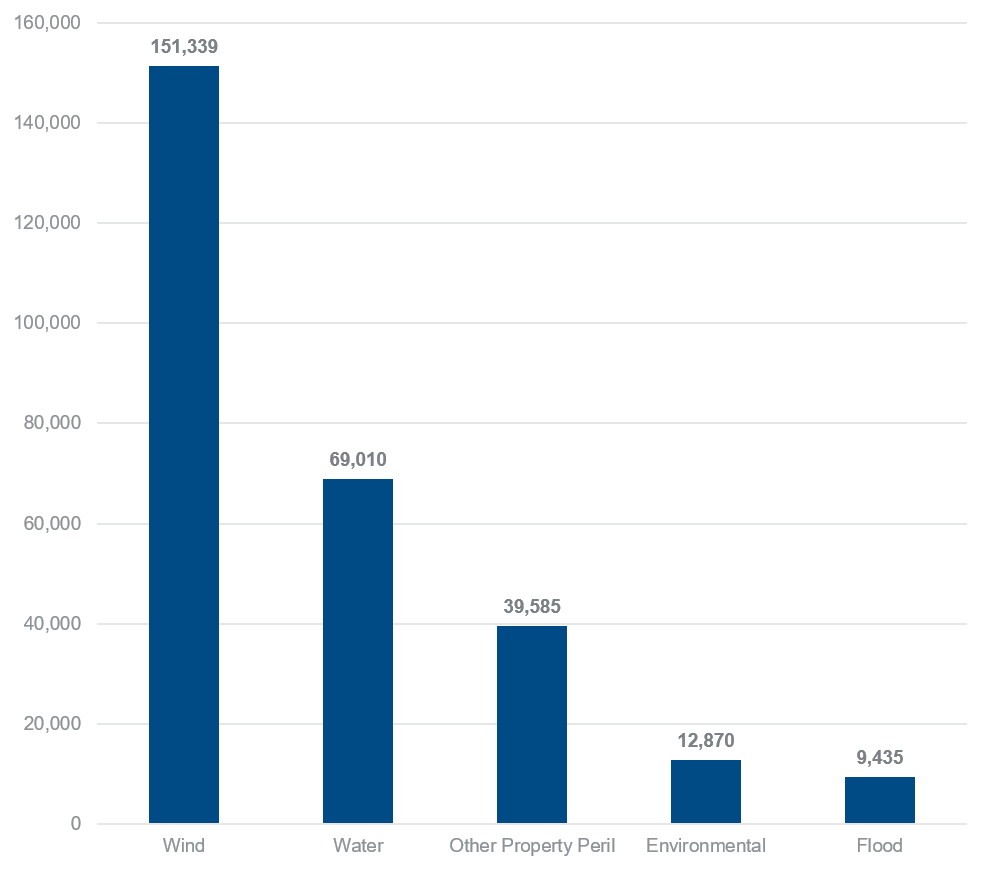 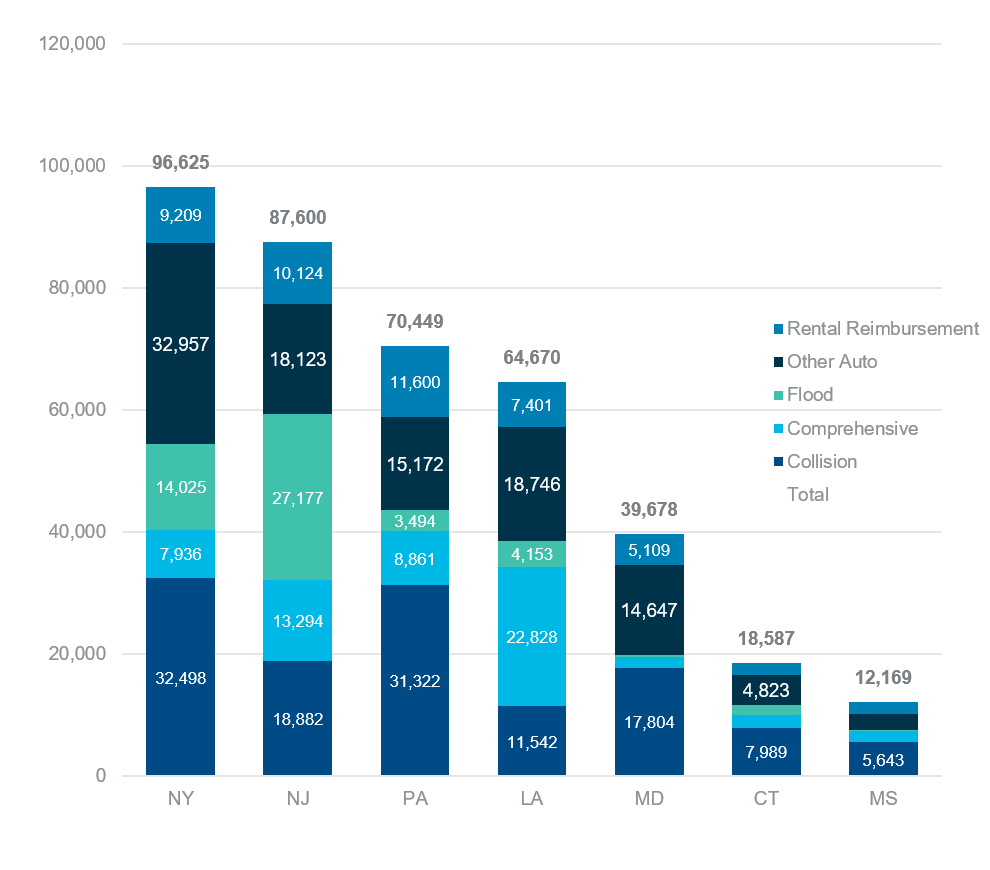 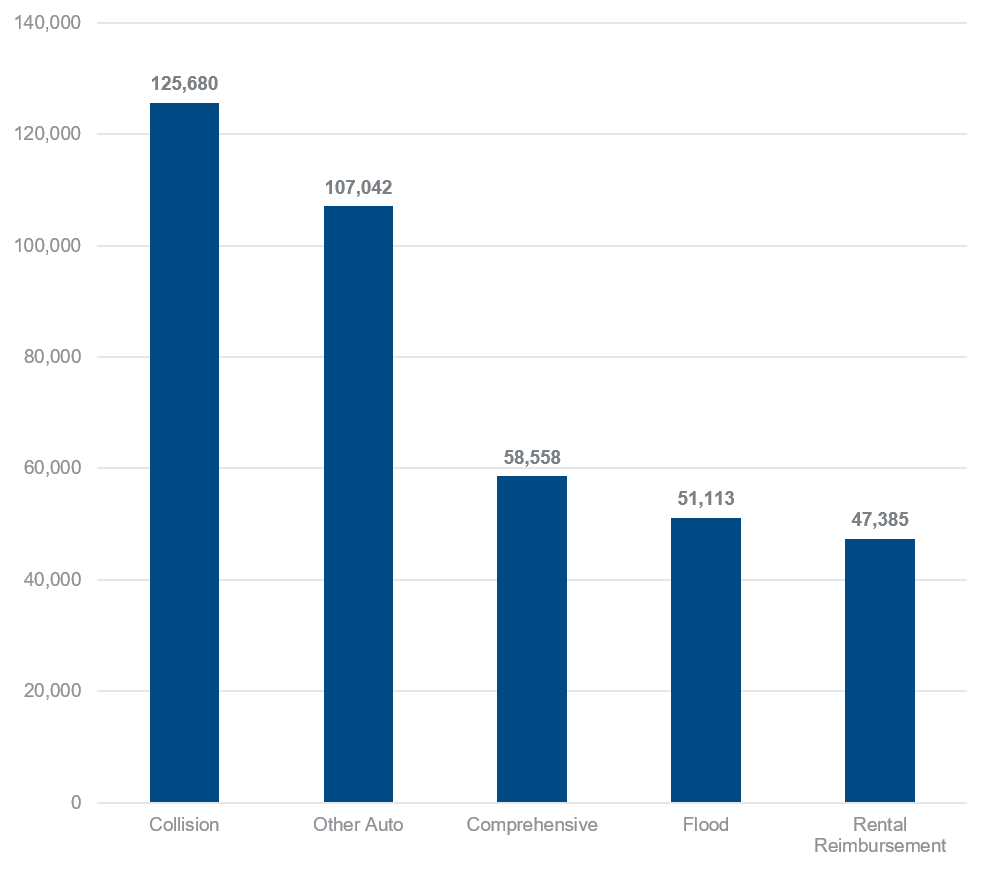 As seen in the Respond Hurricane post-event data, Ida produced devastating wind impacts across much of southeastern Louisiana, with high wind gusts also extending into some neighboring states.

Significant rainfall also caused a number of localized floods. Some areas over southeastern Louisiana received over a foot of rainfall. Heavy rainfall also impacted portions of Mississippi, southern Alabama and the Florida panhandle. Flooding will continue to be a concern as Ida moves northeastward through the next couple days.

In addition to damaging wind and heavy rainfall, Ida brought a risk of tornadoes to portions of the northern Gulf Coast. Some tornadoes did develop during the day on August 30th and August 31st in southern Mississippi and Alabama, bringing additional damage to the impacted area.

A tropical wave entered the eastern Caribbean Sea early during the week of August 22nd. As this wave continued westward, the National Hurricane Center (NHC) continued to increase the likelihood that this system would develop into a tropical cyclone. On the morning of August 26th (Thursday), as the system moved south of Jamaica, the NHC officially upgraded the system to Tropical Depression Nine. Nine continued to become better organized throughout the day as it moved northwestward and was upgraded to Tropical Storm Ida during the evening as the system moved west of Jamaica.

Light wind shear limited Ida to slow strengthening overnight on the 26th into the 27th (Friday) as the system moved through the Cayman Islands. However, during the morning hours on Friday, Ida rapidly strengthened and officially became a hurricane during the early afternoon just south of western Cuba. On Friday evening into the overnight, Hurricane Ida passed through western Cuba as a Category 1 Hurricane with maximum sustained winds of 80 mph. In the 24 hours leading up to landfall in western Cuba, Ida’s maximum sustained winds increased from tropical depression strength at 35 mph to Category 1 hurricane strength at 80 mph, a 45-mph increase.

Land interactions with western Cuba caused Ida to stop strengthening overnight Friday and begin to look a bit disorganized. However, as Ida moved into the southeastern Gulf of Mexico early on Saturday morning (August 28th), the system began to reorganize and by the early afternoon Ida had strengthened to a Category 2 hurricane. Ida slowly strengthened during the second half of the day Saturday, remaining a Category 2 hurricane as the cyclone moved into the central Gulf of Mexico. However, on Saturday night into Sunday morning (August 29th), Ida rapidly intensified, and quickly became a Category 4 hurricane as it moved into the northern Gulf of Mexico. In the 26 hours leading up to landfall, Ida’s minimum central pressure fell 54 mb to 930 mb and the cyclone’s maximum sustained winds increased 65 mph to 150 mph, making it a higher-end Category 4 hurricane.

Ida officially made landfall midday Sunday near Port Fourchon, LA as a higher-end Category 4 hurricane with 150 mph sustained winds. After moving inland Ida began to slowly weaken as the cyclone began to turn northward in forward movement. During the evening hours, as Ida weakened to a Category 3 hurricane, the center of the system passed only about 25-30 miles west of New Orleans. During the first half of the overnight, as the center of Ida passed about 30 miles east of Baton Rouge, Ida further weakened to a Category 2 and then a Category 1 hurricane. Early on Monday morning (August 30th) Ida officially weakened to a tropical storm as the cyclone moved near the border of Louisiana and southwestern Mississippi and Ida further weakened to a tropical depression in central Mississippi that afternoon.

Tropical Depression Ida continued overnight last night (Monday) and into today as the center of the system moved northeastward into south-central Tennessee. Ida will continue to move northeastward over the next couple days bringing heavy rainfall from the Mid-South into the Mid-Atlantic and Northeast as the system transitions to a post-tropical system.

For related Verisk solutions, check out:

Learn more about the products that provide this data.

Xactimate is a software system for estimating the cost of repairs and reconstruction for residential and commercial structures.

Other Ways to Connect

For service or support

Get all the information you need in one place—from customer support to sales, operations, and more.