Wildfire activity is continuing at elevated levels across the western United States and Canada, part of a decade-long trend of increasing intensity and scope. The average annual acreage burned in the United States is nearly 6.9 million over the past ten years, with an overall upward trajectory despite some year-to-year dips. More than 38 million acres were consumed in the past five years and more than 18 million in the past two.1

Verisk’s 2019 wildfire risk analysis highlights this ongoing development, including the lengthening of wildfire “seasons” to span nearly the entire calendar due to rising temperatures and intense droughts. 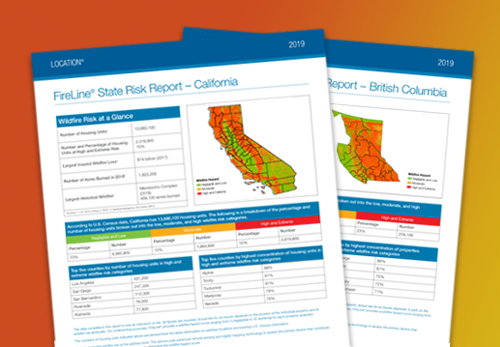 Millions of U.S. households are at high or extreme risk.

California’s record-breaking wildfire activity in 2018, with nearly 1.6 million acres burned, is reflected in the latest county-level data. However, one result of an active wildfire season can be an actual reduction of risk in recently burned areas.

The principal factors Verisk considers in analyzing wildfire risk are fuel, slope, and access. Fuel, primarily vegetation, feeds wildfires. Steep slopes direct heat from a fire upward to ignite fuels above and spread the blaze. And difficult road access to a wildfire’s location can hinder efforts to contain it.

In Butte County, scene of the catastrophic Camp Fire, risk levels decreased for nearly 15 percent of address points because the fire consumed huge quantities of vegetative fuel. The risk will likely remain lower until vegetation regrows and restores the supply of potential fuels.

The effects can flow up to state-level statistics as well. In the wake of the 2018 season, an estimated 29,000 fewer California households are at high or extreme risk for wildfire in 2019. That’s down about 1.4 percent from 2017, but overall risk remains significant despite this minor fluctuation.

Through Verisk’s analysis, nearly 4.5 million U.S. households were identified at high or extreme risk of wildfire, with more than 2 million in California alone, based on numbers of housing units derived from the latest information on address locations and existing U.S. Census information. Nearly 290,000 properties in the Canadian provinces of Alberta and British Columbia were identified with similar risk.

The analysis featured the latest data from FireLine®, Verisk’s wildfire risk management tool. The FireLine Risk Reports provide the number and percentage of households at high or extreme risk from wildfire in the 13 most wildfire-prone states and the two most vulnerable Canadian provinces.

Download our FireLine Risk Reports to see where wildfire risk is highest.