Taking on fire risk in Western Canada with data analytics 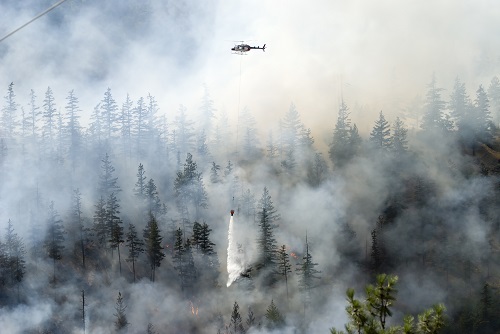 Driven by extreme drought conditions, 2,077 wildfires have burned more than 3.3 million acres during the 2018 season, according to the BC Wildfire Service. Large-scale evacuations reportedly emptied entire cities, impacting some 25,000 residents, with 83 percent of British Columbia designated as “very dry” or “extremely dry.”

FireLine categorized more than 95 percent of the Shovel Lake fire area as high or extreme risk, with more than 90 percent of the area covered in medium or heavy fuels. Such data provided to customers both as an underwriting tool and while fires are active, serves multiple functions: Among other things, it can be useful for insurance exposure management and to understand where and potentially how many claims may result from a fire, preparing insurers to help those affected.

At-risk locations from prior wildfire events

FireLine information was also very effective in identifying at-risk locations burned during prior historic events, such as the 2016 Fort McMurray fire in Alberta. In that instance, with perimeter information based on available satellite imagery, FireLine tracked and analyzed data that covered approximately 790,000 acres, not including other fires within the Fort McMurray area complex.

FireLine uses advanced data and analytics to assess exposure to wildfire risk at individual property locations. This includes information about wildland vegetation surrounding a property, grade of land upon which the property is built, and road access (identifying potential barriers for firefighters accessing a fire).

Taking on fire risk in Western Canada with data analytics