The Carr Fire near Redding, California, approached 104,000 acres after forcing the evacuation of thousands of residents, destroying more than 1,000 structures, and causing six known fatalities. Firefighters made some headway, but containment reached just 30 percent as the blaze crossed from Shasta County into Trinity County, according to the California Department of Forestry and Fire Protection (CAL FIRE). 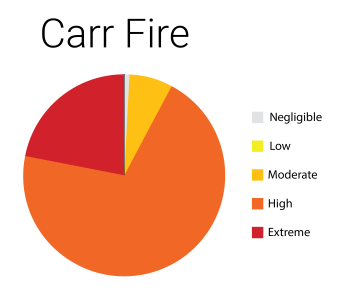 Conditions were expected to favor continued spread of the fire, especially in its northern portion, with shifting winds, hot and dry weather, abundant fuel, and steep slopes, CAL FIRE said. 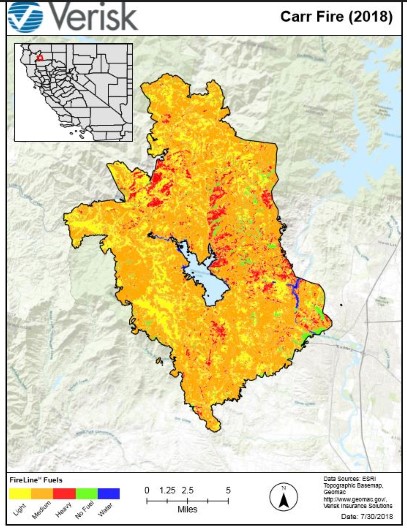 The Carr Fire, reported July 23, had burned 1,378 structures and damaged 244 as of July 31, with more than 2,500 additional structures threatened. Whipped by strong winds, flames at one point jumped the Sacramento River as the fire approached Redding (population approximately 95,000), National Public Radio reported. Some 38,000 people were evacuated, although some evacuation orders have been lifted, and more than 4,000 firefighters were on the scene. The cause was traced to mechanical failure of a vehicle.

FireLine®, Verisk’s wildfire risk management tool, is guiding analysis of risk factors seen within the Carr Fire’s perimeter. FireLine categorized more than 99 percent of the fire area as at risk, with more than 90 percent at high or extreme risk.

Three factors influence the impact of wildfire risk on property losses: fuel, slope, and access. The primary risk factor is a property’s proximity to vegetation—grass, trees, and scrub or brush—which provides fuel for a fire. Another important component is topography, or slope, which influences the speed of wildfire spread. Finally, access—or specifically lack of access—is a critical consideration. Experience shows that when properties are on dead-end streets or in single-access neighborhoods, firefighters face added challenges.

In the case of the Carr Fire, the terrain features considerable amounts of medium to heavy fuel and steep slopes, but access for firefighters is generally good.