The staggering scope of wildfires on the west coast in 2020 now exceeds 5 million acres with a rising toll in fatalities, displaced residents, and destroyed properties across California, Oregon, and Washington. The west coast wildfires are reported to have burned a combined area larger than New Jersey.

In California alone, over 3.6 million acres have burned in 2020, more than any year on record, and over 7,000 structures destroyed with months still to go in “fire season,” according to the California Department of Forestry and Fire Protection (CAL FIRE).1 Among the largest fires hitting California are the Creek, North Complex, August Complex, CZU Lightning Complex, LNU Lightning Complex, and SCU Lightning Complex fires. Of the top ten wildfires in California history, five have occurred in the 2020 season. This includes the August Complex Fire, far exceeding the 2018 Mendocino Complex Fire. Record-breaking heat and roughly 12,000 reported lightning strikes have contributed to California’s historic levels of wildfire activity in recent weeks. 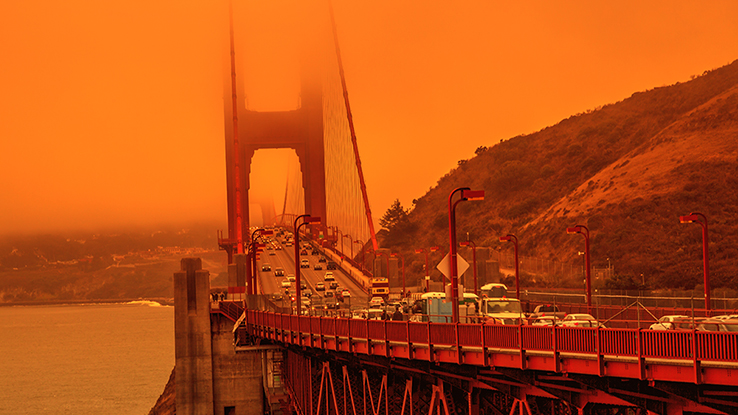 In Oregon, more than 1 million acres have burned, far exceeding the previous record set in 1933, according to the Oregon Department of Forestry.2 The largest, the Beachie Creek Fire, approached 200,000 acres,3 and hundreds of homes and other structures were destroyed in blazes across the state, according to the state’s Office of Emergency Management.4 At one point, at least 500,000 people in Oregon were ordered to evacuate due to the fires – which equates to nearly 12% of the state’s population.5

In Washington state, more than 800,000 acres have burned, approaching the record of 1 million acres set in 2015, according to the state’s Department of Natural Resources.6 Governor Jay Inslee said more than 400 structures had burned, according to the Seattle Post-Intelligencer.7

The latest fire activity has renewed discussion of how climate change can affect the number and intensity of wildfires. Rising temperatures, prolonged droughts, and changing precipitation patterns are expanding wildfire “seasons” to a year-round phenomenon. Data has also identified early spring snowmelt in mountainous regions, which extends the dry season, as exacerbating conditions that contribute to large wildfires. Snow cover suppresses wildfire risk, but early snowmelt exposes dry fuel that can ignite and burn. These factors, combined with increasing human encroachment on wildlands, raise the risk of loss.

Wildfire risk can threaten not only areas with direct exposure but also the periphery, which can see less catastrophic but still potentially costly effects. Other types of wildfire-related losses can include smoke and ash damage, additional living expenses due to evacuations, and business interruption.

Air quality in California also became dangerous, at one point classified as the worst in the world, according to the San Francisco Chronicle.8 AER, a Verisk business, is examining how chemical processes affect the toxicity of smoke from wildfires over various time scales and distances. This research employs laboratory burns, aircraft to sample smoke plumes, and physical and statistical models. Issues studied include how chemical reactions affect the amount of fine particulate matter in smoke and whether fire emissions mixing with urban pollution lead to an increase in ozone. Laboratory and field studies may produce mixed results, and finding causality can be difficult.

The insurance industry appears likely to face long-term trends of increasing wildfire activity, as shown by recent record-breaking seasons. Large-scale data and analytics are critical tools for comprehensively assessing wildfire risk. Verisk examines wildfire risk down to the address level. Verisk’s FireLine Risk Reports identify around 4.5 million U.S. properties at high to extreme risk of wildfire. Of those, more than 2 million are in California—an increase of nearly 2 percent over 2019.

The vast extent of wildfires burning across California includes counties with elevated levels of property exposure identified by FireLine®, Verisk’s wildfire risk management tool. The SCU Lightning Complex fire is affecting Alameda county, which currently ranks fifth in terms of number of housing units at high to extreme risk of wildfire in California, according to FireLine Risk Reports. AIR’s wildfire model9 estimates loss-causing wildfire events will occur once every four years in Alameda County. The August fire is affecting Trinity County, which ranks second in terms of concentration of homes at high to extreme risk, according to FireLine Risk Reports. Loss-causing wildfire events have a return period of two years in Trinity County in the AIR wildfire model.

Property-specific risk data from FireLine indicates that areas affected by the current wildfires in California, Washington, and Oregon all have significant exposure to wildfire hazard.

The wildfire threat has not paused for COVID-19. The pandemic has only complicated these destructive events and mitigation responses. Verisk monitors the active wildfire situation by providing preliminary reports, as well as post-event analyses. For more information about what’s driving the record-breaking 2020 wildfire season, you can connect with our expert panel at Verisk Velocity 2020 for a timely virtual session: Register today.