Wildfires in California surpassed 215,000 acres burned as of November 12, destroying thousands of structures, forcing mass evacuations, and reportedly causing 43 fatalities. The two largest, the Camp Fire in Butte County and the Woolsey Fire in Ventura County, were far from full containment, according to the California Department of Forestry and Fire Protection (CAL FIRE).

The Camp Fire reached 117,000 acres and forced thousands of residents to flee several communities as flames consumed more than 6,700 structures, damaged 58, and threatened 15,500 more. News reports indicated much of the town of Paradise was destroyed.

Reported early in the morning on November 8, the Camp Fire was expected to continue feeding off dry conditions and low humidity, CAL FIRE said. The Sacramento Bee reported the fire traversed six miles from its point of origin to the outskirts of Chico in a matter of hours after it started. More than 5,100 firefighters were on the scene as of November 12, and the fire was 30 percent contained.

Meanwhile, two other fires were growing in Ventura County, northwest of Los Angeles. As of November 12, CAL FIRE reported the Woolsey Fire had burned more than 93,000 acres south of Simi Valley, destroying an estimated 435 structures, damaging 24, and threatening 57,000 more. A number of high-value properties in the wealthy Malibu area were reportedly destroyed or threatened. Nearly 3,600 firefighters were working the blaze, which was 30 percent contained.

The Hill Fire, also in Ventura County, had burned more than 4,500 acres in Santa Rosa Valley as of November 12, destroying two structures and damaging two others. It was 85 percent contained. 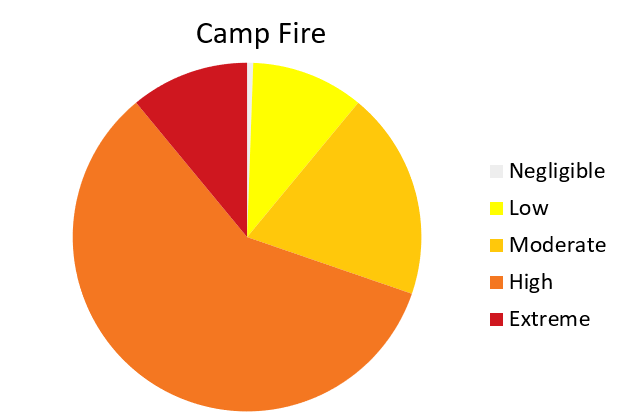 FireLine®, Verisk’s wildfire risk management tool, is guiding Verisk’s analysis of risk factors seen within the Camp Fire’s perimeter. FireLine categorized more than 99 percent of the fire area as at risk, with more than 70 percent at high or extreme risk. The terrain features considerable amounts of medium to heavy fuel and some steep slopes, but access for firefighters appears generally good.

In Butte County as a whole, FireLine shows 42 percent of properties—totaling 40,300 homes—at high or extreme risk. View the FireLine heat map of the Camp Fire. 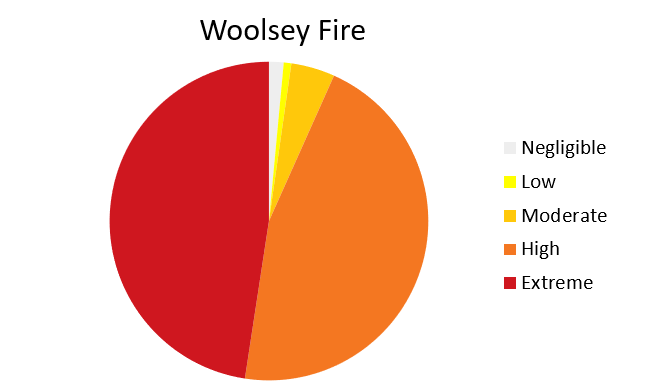 FireLine categorized more than 98 percent of the Woolsey Fire area as at risk, with about 93 percent at high or extreme risk. Nearly 85 percent of the terrain features heavy, large fuels and there are considerable steep slopes, but access for firefighters appears generally good. According to the latest FireLine Risk Report, Ventura is among the five California counties most vulnerable to wildfire. View the FireLine heat map of the Woolsey Fire.

Verisk’s Property Claim Services® (PCS®) has assigned a catastrophe serial number to both the Camp and Woolsey fires.