In many ways, 2018 has been the “Year of Plastic Waste.” Calls to ban plastic straws and bags proliferate, and recent analysis has found that 93 percent of plastic waste in oceans originates from just ten rivers. As of March, the “Great Pacific Garbage Patch” of floating plastic had grown to three times the size of France.

But there’s more plastic pollution than meets the eye. Welcome to the world of “microplastic” pollution, plastic particles so small you often can’t see them. 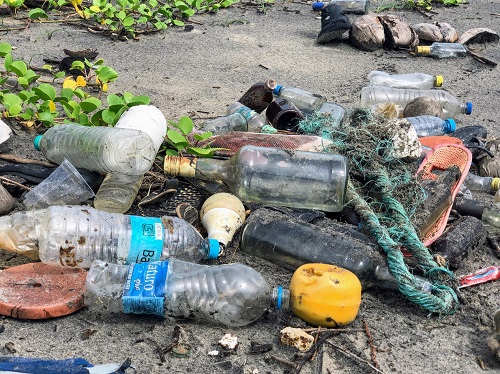 How do microplastics affect the environment? And is human health at risk?

How do these microplastics affect the environment? And is human health at risk?

According to the National Oceanic and Atmospheric Administration (NOAA), microplastics are plastic debris less than 5 millimeters in length or roughly the size of a sesame seed. Some of this debris comes from larger plastic debris that has degraded over time. A leading culprit of microplastic pollution is the “microbead,” tiny plastic pieces found in many cosmetic products. Since 2017, the United States, in response to concerns about water and environmental contamination, has prohibited the manufacture of rinse-off cosmetics that contain microbeads.

No one knows for sure just how much microplastic waste is in our oceans and freshwater sources. However, at least one recent study has reportedly found evidence that previous estimates of 5 trillion microplastic particles in the ocean could be a vast underestimate. A Journal of Medical Toxicology article states that an estimated 94 percent of the plastic in the Great Pacific Garbage Patch is microplastic, with particles identified “in all forms of marine life from zooplankton to whales.”

In our water, in our fish—and in our water bottles

A major concern is the possibility that microplastics ingested by fish could proliferate throughout the food chain and be consumed by humans.

But are they harmful to humans?

Unfortunately, this is still very much an open question. Concerns have been reported  that humans ingesting microplastics could be exposed to harmful chemicals released from the degrading plastics, that these plastics could prove abrasive to internal tissues, and that they could act as vectors for harmful bacteria.

However, it’s currently unknown how significant, if at all, the risks could be. More research in this area is needed. The Journal of Medical Toxicology article noted that the potential long-term health impact of microplastics on human health “remains largely unknown.”

Studies are ongoing. For example, recently, the BBC reported that Indonesian scientists have launched the largest study to date in an effort to determine how microplastics ingested through seafood could be affecting human health.

In sum, microplastic pollution is probably having an impact on water and land environments. But what affect it will ultimately have on human health remains to be seen. Stay tuned.