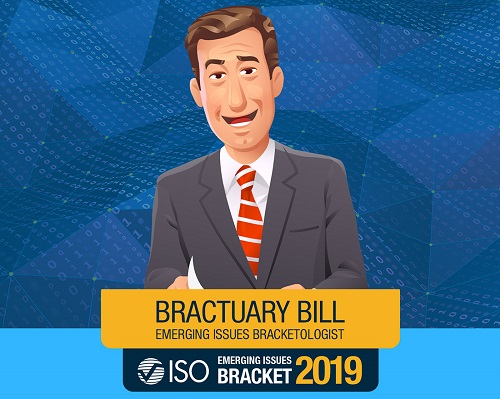 An algorithmic mix of Will Hunting and Nostradamus, Bractuary Bill possesses the expertise and prescience that allow him to provide unique insights as the contest commences.

Bractuary Bill was kind enough to answer some questions for me before the ISO Emerging Issues tournament begins.

Also, for your reference, below are the results of the previous three ISO Emerging Issues tournaments:

David Geller: Let’s get straight to the good stuff. What first-round matchup catches your eye as each topic in the field of 32 begins the chase to win the highly coveted EI bracket title?

Bractuary Bill: It’s hard not to get excited about seeing the Internet of Things (IoT) and Social Inflation go head-to-head right off the bat. IoT has been a heavy hitter in this tournament dating back to its inception. They lost a heartbreaker in the finals in 2014; but not to be deterred, they’ve made it to the top eight issues in the brackets every year. Unfortunately for IoT, they’ve yet to get over the hump.

IoT continued to pick up even more steam as a topic in 2018. From a technological perspective, key breakthroughs in 5G and even quantum could be a potential boon to the industry. Legislation also seems to be starting to reflect IoT’s continuing emergence. This past October, California reportedly became the first U.S. state to create a law that addresses IoT cybersecurity.

However, IoT would be best served not to look ahead this year in the tournament. Social Inflation, a phenomenon potentially rearing its head in the casualty world, appears to be a worthy adversary. My sources within the Emerging Issues team have informed me that Social Inflation has popped up on their radar in a big way this past year and has become a topic of interest to many in the insurance industry.

DG: What matchup would you say is ripe for a blowout?

BB: Not to discredit Social Media, but they had a tough draw here. I don’t think Social Media has the firepower to match what Marijuana brings to the table. Yes, concerns with online harassment are reportedly becoming more prevalent. And okay, ISO has been addressing cyber exposures in many different ways, including various activities on social media.

But the emerging issue of Marijuana appears to be a juggernaut that can come at you from all different angles. Renewed uncertainty stemming from U.S. legislation that might conflict with FDA marijuana guidelines? Yep. A new country reportedly allowing adults to buy, use, possess, and grow recreational marijuana? Take a bow, Canada. An entire series on ISO’s Emerging Issues website dedicated to examining some of the potential risks along the marijuana supply chain? Glad you asked. This issue has the potential to impact lines of business across the entire insurance spectrum. Property, casualty, life, and health—Marijuana will likely make its presence known to many in the insurance industry.

I’m so confident in this that I’m placing the odds of Marijuana advancing at -420.

DG: All right then, Bractuary, I’m taking you to Vegas with me next weekend. Anyway, I know you’re short on time, so I’ll let you have the floor. Is there anything else on your mind heading into the tourney?

BB: Well, Dave, naturally I’m partial to the Artificial Intelligence topic, and I hope this team can make a run. The field of AI is littered with different concepts and applications and probably hasn’t even begun to scratch the surface of its capabilities. The use of video games as a frontier to train algorithms is truly fascinating. While humans are often trained through physical exercise and studying, AI reportedly improves by playing video games. I’m sure many teenagers wish they could say the same to their parents.

While the potential of AI appears to be immense, there have been some concerning trends. Perhaps one of the biggest stories of 2018 was a major online retailer reportedly stopping its use of an automated hiring tool because of potential gender bias. This situation appears to be a classic example of the “black box” problem, which is the term used to describe the difficulties encountered when attempting to identify why an algorithm makes a decision.

DG: Thanks, Bractuary Bill. This was very enlightening.

BB: Thanks, Dave. Looking forward to participating in the survey beginning on February 25.

*Bractuary Bill is a fictitious character. Any resemblance to actual persons, living or dead, or an actual artificial intelligence system is purely coincidental.

What we know about the potential impact of the novel coronavirus