Like all plants, grapes are intimately connected to place—from the rich, fertile soils that feed nutrients to the vines, to the unique climate patterns that nurture and sustain them. Grapes that flourish and produce the choicest wine or sherry in one region may not survive, let alone thrive, in another. Change the place, change the plant.

For farmers and vintners in California’s Napa and Sonoma Counties (aka “wine country”), 2017 and 2020 provided a harrowing example of the power of place as massive wildfires claimed dozens of lives, torched hundreds of thousands of acres and caused billions in losses. More than two dozen wineries were reported damaged or destroyed in fires in both years, and some local hotels were also affected, demonstrating how wildfires of even relatively limited scope can inflict disproportionate harm on local economies and livelihoods.1 Losses at the wineries included thousands of cases of wine shattered or ruined by fire and heat, and entire production and tasting facilities gutted.2 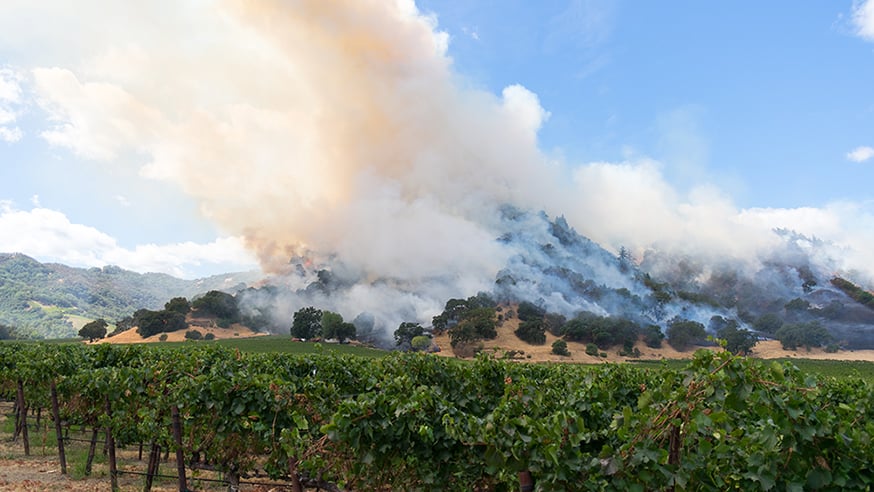 With the wine industry estimating over $3 billion in losses due to these fire events, the spotlight on wildfire risk in Northern California remains as acute as ever.

But even the grapes that escaped the flame’s wrath weren’t necessarily spared from wildfire’s pernicious effects. Many vineyards not damaged by fire still suffered smoke taint—the residue of wildfire smoke and ash that permeates grape skin and tarnishes a wine’s flavor.3 Grapes subjected to smoke taint may no longer be viable for use in high-end wines or may even be spoiled completely—causing potentially significant economic and reputational damage to the vintner.4 And, with the wine industry estimating over $3 billion in losses due to these fire events, the spotlight on wildfire risk in Northern California remains as acute as ever.

Known for its picturesque mountainous flanks and flavorful output, wine country’s serene vistas were marred by over 250 separate wildfires in October of 2017.5 Verisk estimates pegged insured losses from just six of the largest 2017 fires alone at $2-3 billion.6

Those fires spanned over 245,000 acres and forced the evacuation of over 100,000 people.7 One of the blazes, the Tubbs Fire, was (at the time) one of the most destructive fires in the state’s history, causing 22 fatalities, torching over 36,000 acres, destroying over 5,600 structures and damaging hundreds more across Napa and Sonoma counties.8

Wine country was rocked again in 2020 by numerous fires, including the third largest fire in the state that year and sixth in the state’s history—August’s LNU Lightning Complex Fire.9 The fire consumed over 363,000 acres across five counties.10

Napa and Sonoma counties were ablaze again the following month when the Glass Fire tore through the region burning more than 67,000 acres and destroying 1,555 structures in September and early October of 2020. According to FireLine, Verisk’s wildfire analytics solution, the total area affected by the Glass Fire was at risk, with approximately 98 percent at moderate-to-extreme risk.

The 2017 and 2020 fires were a culmination of a disturbing trend of wildfire in wine country. According to one analysis, since the turn of the century, wildfire has burned over 600,000 acres in wine country that hadn’t burned since the 1950s.11

For residents and businesses in throughout Northern California, the threat of wildfire remains very much real. After several smaller wildfire events occurring earlier in the year, wildfire season in California began in earnest in late July, with the Oak and McKinney Fires.

The Oak Fire, which began on July 22nd, has burned nearly 20,000 acres in Mariposa County, which is in the top five counties with the highest concentration of properties at high and extreme risk of wildfire (78%) according to the FireLine Risk Reports. While the acreage of the Oak Fire has been small compared to other fires that has occurred in the vicinity of the Sierra Nevada mountain range, destruction has been significant, with dozens of structures destroyed.12

Emerging as the largest California wildfire of 2022 so far, however, is the McKinney Fire. The McKinney Fire, which burned over 55,000 in its first three days, has currently burned just over 60,000 acres and is 95% contained.13 Burning in Siskyou County, over 100 structures have already been reported destroyed, thousands evacuated, and several dead.14

The drought conditions that are heightening wildfire risk in wine country and throughout the American West are expected to persist for years. This year is already the driest in California for the past 128 years.15

As insurers continue to grapple with wildfire risk in wine country and beyond, powerful data assets and actuarial solutions can help identify properties/structures at risk.

To learn more about how FireLine can help insurers understand and manage their wildfire risk exposure. 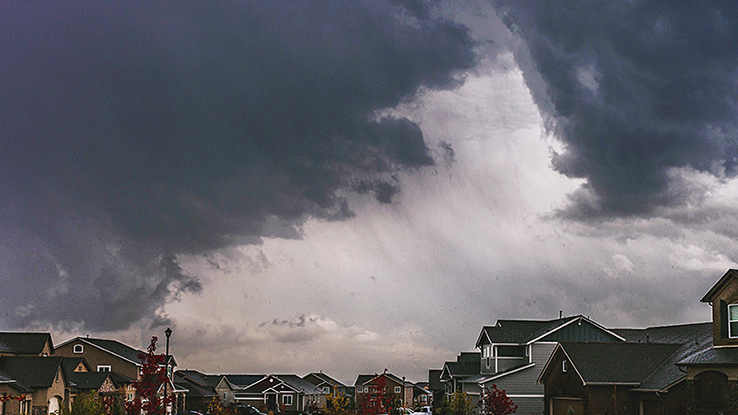