Hot in here: Why it’s getting harder to fight house fires

Advances in fire science and changes in the very things that burn are creating new realities on the front lines of firefighting. It’s important for insurers to understand the changes, not only in the properties they insure but in how they assess a community’s adaptation to evolving challenges in fire protection.

What do these changes look like on the ground? Consider just one scenario: 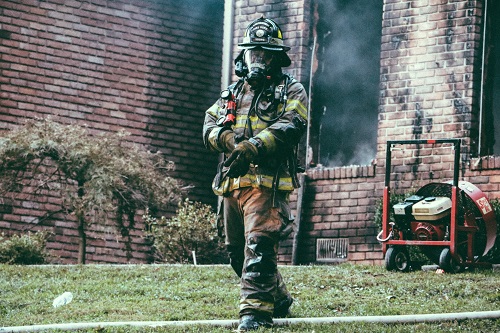 This is not 50 years ago. Today’s house fire is fueled by a mix of new materials that burn hotter.

A firefighter stands outside the window of a burning room. Moments earlier, flames raised temperatures at the ceiling to more than 2,000° F, but then the fire seemed to die down. Now, a hand tool is at the ready to begin smashing the glass and venting the smoke-filled space, but the firefighter is waiting for a second tool to be put in position.

On cue, the firefighter breaks the window, letting in a rush of oxygen that will stoke the fire again. But that second tool—water—streams in at the same time applied from the exterior, quickly cooling the fire and reducing the likelihood of fire spread causing greater damage to the house.

Not long ago, some in the firefighting profession might have seen such tactics as heresy. Traditional doctrine dictated venting the room first to lower the temperature before pouring on the water from inside the structure.

But this is not 50 years ago. Today’s house fire is fueled by a mix of new materials that burn hotter. Oxygen runs out faster, and more unburned fuel remains after the flames flicker out. To get this blaze roaring again, all it takes is fresh air to complete the essential triangle of fuel, heat, and oxygen that sustains the chemical chain reaction that is fire.

The more you know

The traditional approach to firefighting has been to take away one side of the fire triangle, and that remains fundamentally the same. In many cases, firefighters have focused on reducing heat, typically using water to cool the fire. Alternatively, removing fuel might entail shutting off a gas line. Removing oxygen could mean displacing it with carbon dioxide or applying firefighting foam, which separates the oxygen from the fuel.

While the approach of removing one leg of the triangle hasn’t changed, over the past 30 years the variability, complexity, and interaction of these sides have changed significantly—for house fires, in particular affecting four areas.

From small homes on big lots to big homes on small lots: Data from the U.S. Census Bureau Survey of Construction shows the average square footage of new homes increased roughly 60 percent from less than 1,700 square feet in 1973 to around 2,700 square feet in 2015; in that year, about 38 percent of new construction exceeded 3,000 square feet. Since the 1970s, the number of two-story, single-family homes increased from 23 percent to 58 percent. Meanwhile, from 1992 to 2015, the average lot size for a single-family home decreased from 10,000 to 8,600 square feet, with much denser concentrations in some areas where land is especially expensive. Less space between houses means greater danger of fire jumping from one to another.

From closed, compartmentalized house layouts to “open concept” designs: Modern homes tend to have taller ceilings with features such as two-story foyers and great rooms. Overall volumes are larger, providing more air to feed fires. Popular open concept designs mean less compartmentation, which allows fire and smoke to spread more quickly. And while the average home size has increased, firefighting resources haven’t kept pace in many areas of the United States—or have even been reduced.

From solid to lightweight construction: Structural members in many modern homes have much less mass, and critical elements have smaller dimensions. In many cases, they’re held together by light metal connectors or include temperature-sensitive, glue-laminated beams. Findings from the National Institute of Standards and Technology and UL have shown that in a fire, some newer structural elements may fail in one-third the time of their more traditional counterparts. Newer insulation and siding materials also change the hazards, and there’s more potential for concealed fires. Together, these factors often dictate less aggressive firefighting tactics, such as keeping personnel off roofs.

From natural to synthetic materials in home contents: Household items that once contained natural materials such as paper, wood, and cotton are often now synthetic or plastic, which are oil or hydrocarbon-based. The result is much hotter, faster-developing fires. In a burning room, temperatures at the ceiling that may have been 1000°-1200° in the past have doubled.

All of these changes have altered the fire behavior seen in many of today’s incidents compared with a few decades ago. 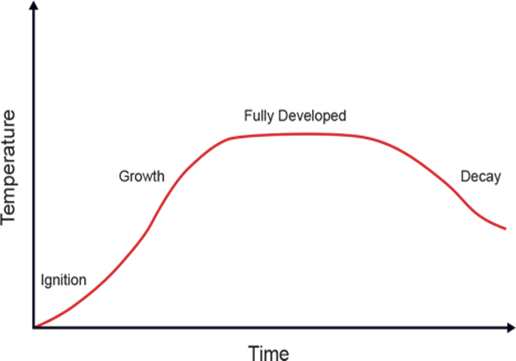 The traditional fire development curve shows a fuel-controlled fire, which is not held back by a lack of oxygen. As more fuel becomes involved, the energy level continues to increase until all available fuel is burning—that is, the fire is fully developed. As the fuel burns off, the energy level begins to decay. The key is that oxygen is available to mix with the heated gases (fuel) to complete the fire triangle and generate energy. Fire behavior in these cases, with less combustible fuel and more compartmentalized houses, is “stable,” and firefighting techniques don’t have to be as stringent. 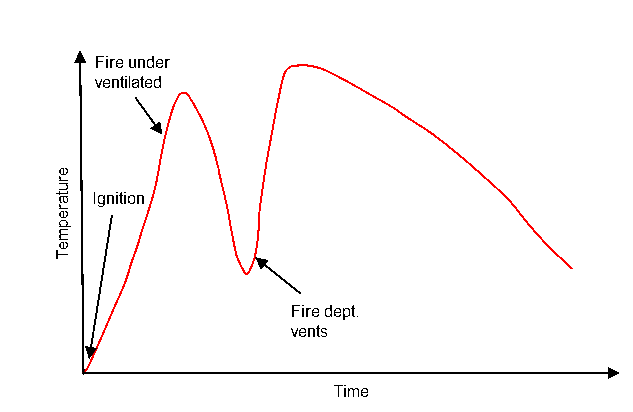 The new fire development curve shows the time history of a ventilation-controlled fire. In this case, the fire starts in a structure with exterior doors and windows closed. There’s adequate oxygen to mix with the heated gases, which results in flaming combustion. The synthetic fuel is more combustible, so temperatures rise faster and higher.

These hotter fires consume more oxygen, so as the oxygen level diminishes, the fire decays and the heat decreases. But it’s still hot enough and there’s still enough unburned fuel to respond to a fresh dose of oxygen—such as when firefighters open a door. This change in ventilation can cause the fire to grow explosively. The extreme conditions make the fire less stable and less forgiving, and proper strategies and tactics become more critical.

Going for the cure

As ventilation-limited fires became more common, the fire services started to see traditional approaches losing effectiveness. There were more catastrophic losses, larger fires on arrival, and more fires getting out of control. Initial responses tackled the symptoms by way of better firefighting gear, larger hoses, and new tools such as mechanical saws and thermal imagers.

But the emerging issues also led to fresh research over the past 15 to 20 years that overturned some long-held beliefs. Two examples are as follows:

Research says: The quicker water is put on the fire, the better—and exterior attack can help.

Belief: Venting is cooling, so venting and searching come before putting water on the fire.

Research says: Venting does not always lead to cooling, but well-timed ventilation coordinated with hose streams will improve conditions.

Such new knowledge is changing techniques and best practices, and that’s where it becomes important for insurers to know whether a community is implementing these changes, and how well.

This is why schedule underlying Verisk’s Public Protection Classification (PPC®) system goes into exhaustive detail examining the fire protection capabilities of thousands of communities across the United States. While distance to the nearest responding fire station may be a good starting point for a given property, that is only one part of the calculation that determines how long it takes a fire department to respond.

The time it takes the 911 communication center to process an alarm, as well as how quickly a fire department can turn out once it is alerted, are two essential components that determine overall response time. It’s also critical to know who and what are coming from that station in the event of a fire. Are the firefighters—especially the incident commanders—equipped with the latest knowledge of fire behavior and how to attack it?

Verisk digs into these and many more fine points of fire protection for each community evaluated, and Verisk’s own research has shown the resulting PPC classifications are 9 times more predictive of future fire loss than distance to the nearest fire station alone.

Josh Gibbons is product director for ISO’s PPC program. He can be reached at JGibbons@verisk.com.

Kevin Kuntz is Vice President of Risk Engineering, Safety and Training, and Chief Engineer for ISO Commercial Lines. He can be reached at KKuntz@verisk.com. 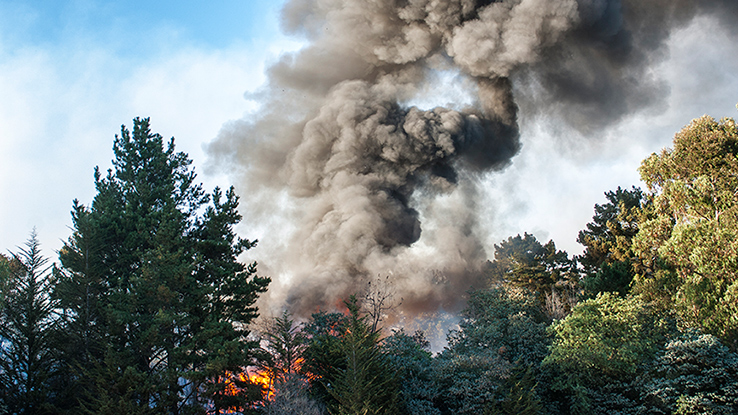