A record-breaking 2018 wildfire season in California—with ominous signals suggesting more of the same to come—is lending urgency to insurers’ search for tools to achieve accurate risk assessment, prudent underwriting, and effective mitigation of wildfire risk wherever possible. First, however, it’s important to understand the risk factors that heighten wildfire exposure and drive the destructive course of these events.

The risk begins with three primary factors: fuel, slope, and access—all of which played significant roles in California’s most destructive events in 2018, the Camp and Woolsey Fires. 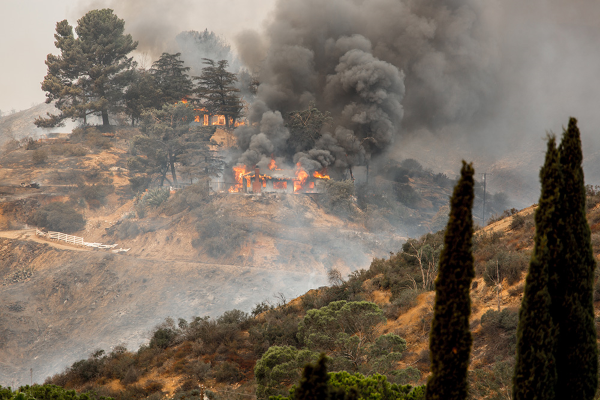 According to Verisk estimates, 4.5 million homes could face high or extreme potential risk from wildfires across the western United States.

Wildfires feed primarily off vegetative fuels that are combustible to varying degrees, depending on wildland ecosystems and how they’re distributed within an overall climatic setting. Vegetation classes, which determine the types of fuels in an area, may include grasses, trees or woody vegetation, and shrubs or brush.

The kinds of brush that dominate in parts of Southern California constitute “heavy” fuel. Thick brush has been the main fuel feeding many of Southern California’s most destructive fires. This burns more readily than grass, a “light” fuel that predominates in some other regions, such as southern Idaho.

In the Camp and Woolsey Fires, medium and heavy fuels predominated, especially for the latter, where more than 80 percent of the fuels were categorized as heavy.

Slope: steeper slopes can increase the speed and intensity of wildfire

Growth and development of wildfires often depend on topography. A slope directs hot air upward from a fire to ignite dry vegetative fuels above, causing the flames to advance rapidly to higher elevations. This puts properties along slopes at risk. And it’s not only uphill properties; those located below can be exposed to falling embers.

Locally complex terrain generally can heighten risks from wildfires. Topography has been shown to significantly influence fire-related property damage throughout the western United States and has played a role in multiple fires.

Dead-end and minimal-access roads in rural areas can make some properties difficult for firefighters to reach. These properties could be at elevated risk for damage. In the Camp and Woolsey Fires, respectively, about 16 percent and 18 percent of properties presented access problems.

An additional risk factor for wildfire-related losses, in Southern California and in other areas, can be airborne embers carried by wind patterns. These patterns include strong, dry downslope winds that often prevail in autumn and winter, including peak fire season. This issue was widespread during the 2018 season across all geographies.

Remote sensing technology is an established tool for assessing factors of vegetation, topography, and weather. Meanwhile, digital mapping technology accurately portrays road networks. Together, these data sets can reveal much about a specific location. A mathematical model can then use these factors to generate an impartial numerical score for measuring relative wildfire risk among properties.

Recent short-term trends suggest a long-term shift toward more destructive and longer-burning fires. Projected rising temperatures and drier conditions, driven by global climate change, could worsen the risk of wildfires in the American West. This could mean destructive years such as 2018 would occur more frequently. For example, research has uncovered a connection between wildfires and mountain snowmelt in early spring. Earlier snowmelt can mean a longer and drier summer season that generates more potential wildfire fuel in the form of drier vegetation.

According to Verisk estimates, 4.5 million homes could face high or extreme potential risk from wildfires across the western United States. Properties in this risk category historically account for nearly 90 percent of wildfire losses. The highest-risk properties are concentrated in California, Colorado, and Texas, which combined account for 70 percent of the riskiest properties in the western states.

Increased development in the wildland-urban interface threatens to further heighten the exposure of homes and businesses to potential wildfires; and this, in turn, will call for better tools to assess fire risk.