Every child who hears the story of the Three Little Pigs learns that a building made with sturdy material such as brick is better constructed than one using straw or sticks, at least when a wolf is hunting his dinner. In the real world, substitute hurricanes, floods, earthquakes, and wildfires for wolves, and the lesson holds true.

How a building is constructed can mean the difference between coming out of a natural disaster relatively unscathed or sustaining a devastating loss of property or even life. 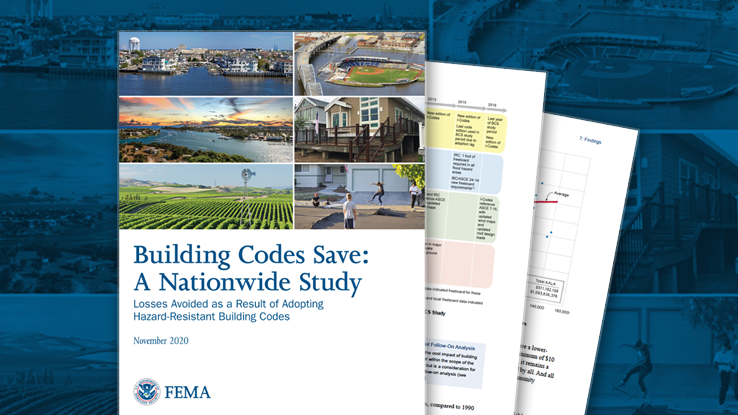 The year 2020 has been extraordinary for myriad reasons, not least the record-setting number of natural disasters that befell the United States, including wildfires, hurricanes, drought, and floods. The National Oceanic and Atmospheric Administration (NOAA) counted 16 weather and climate disasters this year that each topped $1 billion in damage in addition to the incalculable loss of life.1

Total U.S. losses due to natural disasters exceeded $1.6 trillion since 1980.2 The increasing severity and frequency of natural disasters in recent years, combined with the growing population in disaster-prone areas, means this crisis could worsen without mitigation efforts.

What FEMA learned about building codes

Building Codes Save: A Nationwide Study of Loss Prevention, published by FEMA in November 2020, studied 18.1 million buildings constructed since 2000. FEMA examined structures in all 50 states and Washington, D.C. About half—9.1 million—avoided losses totaling $1.6 billion because they were constructed following stringent building codes.

FEMA—which works with local and state governments to help communities reduce their risk from natural disasters—has spent 30 years investigating how construction materials and standards affect the ability of buildings to withstand such catastrophes. That investigation includes scrutinizing the smallest details, such as the type of nail used to join wood framing.

Building Codes Saves, which began with a pilot phase in 2011 and culminated with the 2020 final report, was initiated to test the hypothesis that communities in hazard-prone areas benefit financially from adopting strict building codes. FEMA specifically studied such standards as the International Building Code® and the International Residential Code®, introduced by the International Code Council in 2000, and collectively called I-Codes.

The answer to FEMA’s query about the correlation between adoption of building codes and financial savings was a resounding yes. FEMA’s study found that:

One of the most cost-effective ways to safeguard communities against natural disasters is to adopt and effectively enforce hazard-resistant building codes. This chart shows the Average Annualized Losses Avoided (AALA) by type of hazard when building codes are employed. 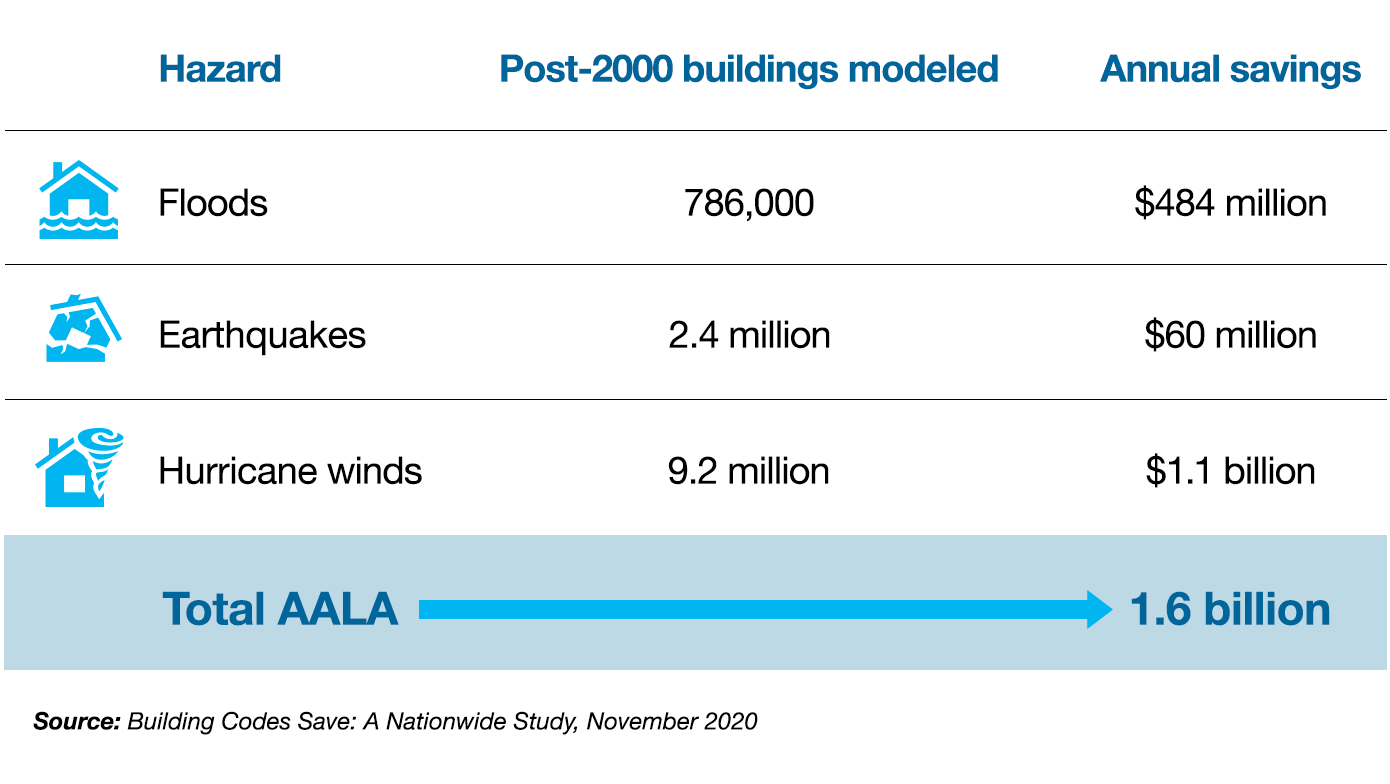 Avoid costly repairs: FEMA’s study confirmed that building codes are a highly cost-effective method to prevent catastrophic losses from natural disasters. Using an average home construction cost of $300,000 as an example, the cost to safeguard that home against hurricanes would be $4,500—or 1.5 percent of the total. FEMA estimates the losses avoided each year would be $1,600, adding up to $48,000 after 30 years, well over the increase in construction costs.

Reduce interruption to small businesses: The FEMA study also examined the broader benefits of building codes. It revealed that communities with well-enforced, up-to-date codes are more resilient in the wake of disasters. Beyond the significant reductions in damage and related financial loss associated with building codes, communities avoided interruptions to businesses and subsequent loss of jobs. FEMA notes that 40 percent to 60 percent of small businesses fail to reopen after a flood or a hurricane.

How ISO’s BCEGS can help

ISO’s Building Code Effectiveness Grading Schedule (BCEGS®) was among the key data sources FEMA relied upon for its analysis. BCEGS assesses building codes in most communities nationwide to determine which codes are in effect and how well a community enforces them, with particular emphasis on mitigating losses from natural disasters.

Many insurance companies rely on BCEGS for underwriting because safer buildings withstand natural disasters better, leading to lower insured losses from such events. BCEGS assigns communities grades of 1 (exemplary commitment to building code enforcement) to 10. Communities with effective building codes benefit from reduced insurance premiums, which provides a powerful incentive to adopt and enforce the standards.

Dale Thomure is the manager of ISO Community Mitigation at Verisk. You can contact Dale at Dale.Thmure@verisk.com.