The Apple Fire burned over 27,000 acres in California’s Riverside County, according to the National Interagency Fire Center, prompting the evacuation of nearly 8,000 residents from about 2,500 homes. Twelve structures were reported destroyed. The fire was 30 percent contained as of August 5, according to the California Department of Forestry and Fire Protection (CAL FIRE).

The fire started north of Cherry Valley on July 31, and NBC News reported that officials believe the cause was a vehicle malfunction, specifically hot particles from diesel exhaust.1 The Los Angeles Times reported that an area of narrow canyons and drainage channels was burning, and officials were finding it difficult to determine the full extent of the blaze. Over 2,500 firefighters were on the scene, the Times reported.2 Flames were reported moving toward the San Bernardino National Forest, according to ABC7.3 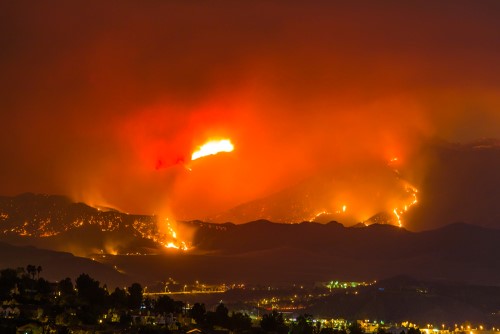 Officials believe the cause was hot particles from diesel exhaust.

FireLine®, Verisk’s wildfire risk management tool, is guiding analysis of risk factors seen within and around the Apple Fire’s perimeter.

FireLine categorized the total fire area as at risk, with more than 98 percent at high or extreme risk. Medium to heavy fuels cover much of the area, which also features many steep or extreme slopes.

The Apple Fire is burning in Riverside County, east of Los Angeles, which ranks fourth in the state by number of housing units—80,600—in the high or extreme wildfire risk categories, according to the 2020 FireLine State Risk Report for California.

The Palmer Drought Severity Index, or PDSI, indicates that Riverside County has been in an extended dry period since approximately 2012. Reports indicate that the Apple Fire activity is predominantly being driven by record-low moisture content of vegetation combined with high temperatures and low relative humidity.5

The 10,000-year stochastic catalog for the AIR Wildfire Model for the United States indicates that loss-causing events occur in Riverside County approximately twice per modeled year.

Several additional wildfires are burning across California, the largest of which include the 22,000-acre Gold Fire in Modoc County and the Hog Fire in Lassen County, which approached 10,000 acres. CAL Fire reported at least 96 percent contained as of August 5.

During this uptick, wildland firefighters are operating under constraints imposed by the COVID-19 pandemic, which has affected public safety functions from the federal to local levels as resources remain limited and ordinary modes of operation are set aside. Incident response and mitigation efforts may be affected by staff shortages and travel restrictions. In addition, firefighter training, prescribed burns, and community awareness meetings have been postponed to help prevent the spread of the virus.

For the 2020 season, California fire officials told CNN that safety measures would include scaling back the large base camps that are typically established near fires; greater use of earth-moving equipment to dig fire lines; and more use of aircraft in fighting and monitoring fires.6

To date in 2020, CAL FIRE has recorded 5,762 wildfire incidents covering more than 200,000 acres, with 50 structures damaged or destroyed. As the wildfire threat grows and evolves in California and across the western United States and Canada, FireLine can help property insurers with address-level risk management. To complement this; at the portfolio level, AIR Worldwide, a Verisk business, offers a stochastic view of potential financial losses from wildfires and associated probabilities as well as average annual loss.