Wildfire around the world: A threat without borders

Firefighters in the western United States face a shared struggle with others around the world who battle wildfires as the “seasons” for these events seem to grow longer and more destructive every year. Climate change and human encroachment on wildlands—driven by property development and agriculture—have fostered conditions that increase fire risk in disparate regions, from California, to Australia, to the Amazon rainforest, to Siberia. 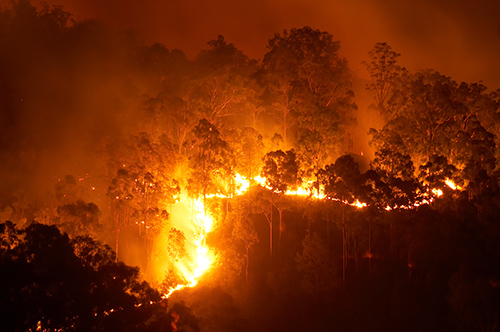 The above map is segmented by average fire ignitions per month as detected by satellite-based MODIS (Moderate Resolution Imaging Spectroradiometer) instruments over the past five years. Ignition points detected by MODIS can indicate multiple types of fires with various causes—including lightning, arson, and even prescribed burns—but the majority of detections are wildfires. Of those, human-caused wildfires have been among the most devastating. The five most active countries are Russia, Brazil, Australia, the Democratic Republic of the Congo, and the United States, all of which have experienced record-breaking wildfire seasons recently.

Vegetative fuels: Wildfires feed primarily off vegetative fuels that are combustible to varying degrees, depending on wildland ecosystems that develop within various climatic regimes. At a very high level, vegetative fuels may be classified as grasses; trees or woody vegetation; and shrubs or brush.

Terrain: Steeper slopes can accelerate the spread and increase the intensity of wildfires. A slope directs hot air upward from a fire to ignite dry vegetative fuels above, driving the flames rapidly toward higher elevations and threatening properties in the path of the blaze. Meanwhile, falling embers can ignite downhill properties.

Road access: Dead-end and minimal-access rural roads can make it difficult for firefighters to reach some properties, putting those structures at greater risk for damage.

Wind patterns: Wind can create additional complications for wildfires. Embers can be carried by the wind and extend the perimeter of a fire quickly by igniting nearby objects and properties. This has played a significant role in the growth of the bushfires in Australia, which is the world’s most acute ongoing wildfire event.

An analysis in Ars Technica explored the factors contributing to Australia’s current surge in fire activity. Heat and drought, driven by effects of ocean temperatures on the atmosphere, have played major roles. A phenomenon known as the Indian Ocean Dipole has been in a strong positive phase of late, producing above-average water temperatures in the western Indian Ocean and cooler temperatures to the east. This has suppressed rainfall in Australia. But meanwhile, an unusual weather pattern heightened the effects of wind.6 This climatic phenomenon, known as sudden stratospheric warming, disrupted high-altitude winds encircling the South Pole, according to a report in Nature.7

The Ars Technica report in turn tied this event to strong westerly surface winds blowing across Australia’s Victoria and New South Wales states in the latter part of 2019, which exacerbated the fires.8 Strong winds make a fire’s spread not only faster but harder to anticipate, with radiant heat and airborne embers moving ahead of the fire in unpredictable ways.

Though stratospheric warming of this magnitude occurs every two years in the Northern Hemisphere, there are only a few comparable events in the Southern Hemisphere throughout the observational record, according to Judah Cohen, director of seasonal forecasting at Verisk’s AER business. “This event resulted in record warm temperatures in the polar stratosphere for all of September and part of October,” Cohen said. “Based on temperatures alone, this was a singular event, which has had a very persistent influence on the weather throughout the Southern Hemisphere.”