Verisk recently released its latest 360Value® Quarterly Cost Update, which offers an overview of current reconstruction cost trends at the national and state/provincial levels for the United States and Canada from January 2020 to January 2021.

Total reconstruction costs, including materials and retail labor, increased sharply again at the national level in the United States, up 9.1% from January 2020 to January 2021. This nearly matched the 9.2% growth seen from October 2019 to October 2020. Persistent high lumber prices led the continuing surge. But the increase leveled off in the fourth quarter of 2020 (October through December) at 0.8%. 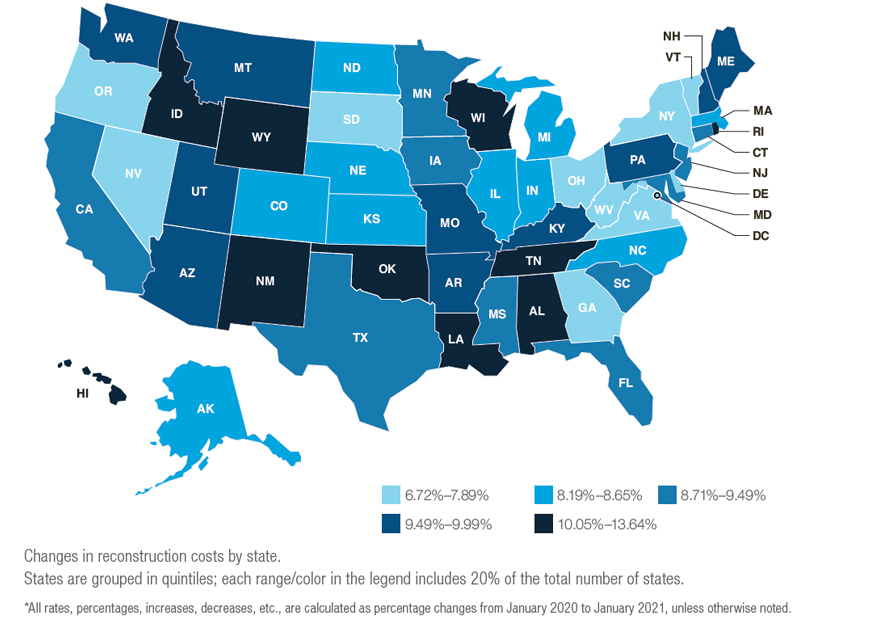 Reconstruction costs increased in all states, with the largest changes seen in Idaho at 13.2% and Hawaii at 11.2%. New Mexico showed the most variable cost increases, as the state climbed 34 rank positions.

The materials component of costs showed increases in all categories, with lumber costs again showing extraordinary growth at 54.0% in a market reflecting high demand driven by increased building activity, supply shortages stemming from pandemic-related shutdowns earlier in the year, and reduced production as the slower winter building season starts. On the labor side, drywall installer/finisher costs again saw the fastest rate of increase at 13.0%.

In Canada, at the national level, total costs increased 7.9% from January 2020 to January 2021, further accelerating the ongoing trend of cost growth. During the fourth quarter of 2020 (July through September), reconstruction costs grew 1.75%. 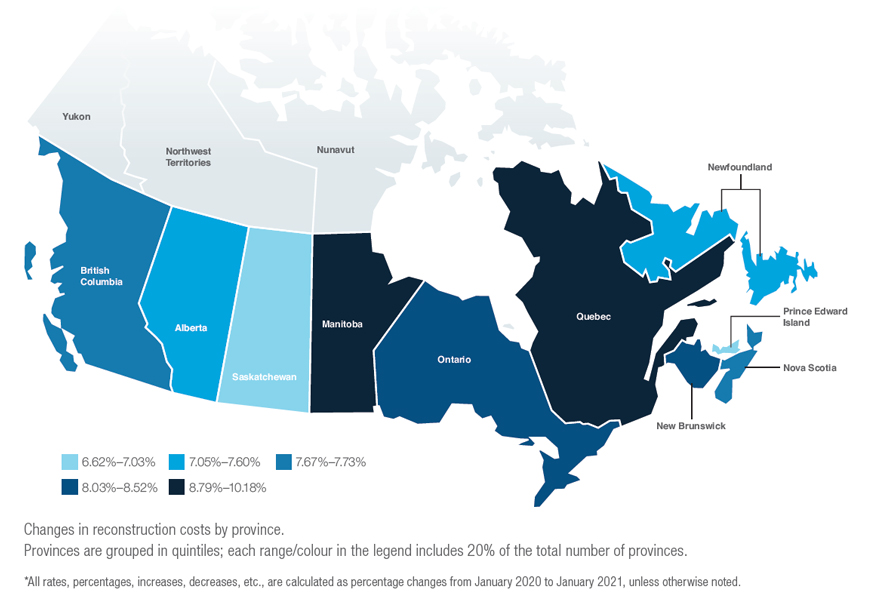 All ten provinces experienced cost increases in the latest reporting period. Increases in Quebec and Manitoba were highest at 10.2% and 8.8%, respectively, while Saskatchewan and Prince Edward Island had the smallest increases at 6.6% and 7.0%.

Lumber costs again showed the greatest increase at 42.7%, even higher than the 38.3% spike from October 2019 to October 2020. This may reflect ongoing pandemic-related constraints on supply amid a general increase in building activity and reduced production as building slows for the winter. On the labor side, roofer costs grew the most at 7.8%.