Wildfires need three things—conducive weather, a source of ignition, and a supply of fuel. Precipitation and drought cycles can both encourage plant growth and dry it out to form ideal fuel material. Hot and dry periods allow leaves, grasses, scrub vegetation, fallen branches, and even trees to dry out and become extremely flammable. All the tinder box needs then is a spark. We can’t do much about natural causes of ignition or weather patterns but can become better at reducing the availability of fuel. 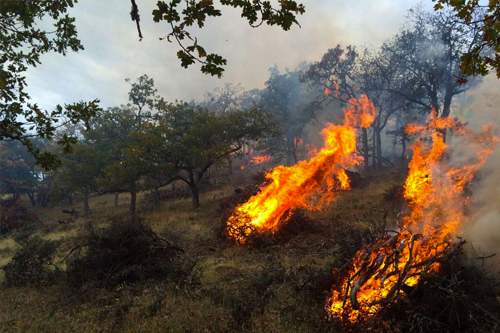 Climate, weather, vegetative density, and large distances between populated areas all contribute to the region’s propensity for wildfires.

A series of major wildfires—particularly the Peshtigo Fire that killed 1,500 people in Wisconsin in 1871, the Santiago Canyon Fire in California in 1889, and the Great Fire that burned 3,000,000 acres of Washington, Idaho and Montana in 1910—created the mindset that forest wildfires had to be suppressed. By the mid-1930s the U.S. Forest Service aimed to suppress wildfires by 10 a.m. on the day they were reported. Firefighting crews were set up, a network of fire lookout towers was established, and the character Smokey Bear was created to educate the public (Some readers will remember his slogan, “Only you can prevent forest fires”). By these and other measures the area of national forest burned annually was successfully reduced.

By the late 1960s, however, an alternate view came to the fore, as it was increasingly realized that fire is an essential ecological process. Many ecosystems rely on wildfires as an important regulator of their functioning, structure, and survival. Land management practices that suppress all wildfires over time can lead to a superabundance of fuel, allowing future fires to be even more intense and damaging. Rather than controlling and suppressing wildfires, the emphasis shifted to wildfire management and the use of prescriptive (planned) fires to reduce fuel accumulation.

Fuels Management at the State Level

The catastrophic 2017 and 2018 wildfire seasons in California highlighted the issues of increasing development in the WUI and the abundance of fuel. The western United States possesses several characteristics that make it particularly prone to wildfires. The climate, weather, vegetative density, and large distances between populated areas all contribute to the region’s propensity for wildfires.

In general, the western U.S. receives sufficient precipitation to support vegetation growth, but also experiences extended warm, dry seasons. This pattern provides an ample growing season to accumulate fuels and then dries them out. In addition, the various mountain ranges produce strong wind patterns. These sustained winds help wildfires develop and spread. Finally, populated areas in this part of the country are commonly separated by vast wildlands. Large forested areas and grasslands occupy the wildlands, serving as huge fuel supplies. The distances between developed areas allow wildfires to become quite large before they are reported or suppressed.

There is growing acceptance in California that forest, grassland, and chaparral shrubland management must be improved using practices such as prescribed (planned) burns, that vegetation removal efforts must be enhanced, and that these fuel reduction initiatives must be repeated every few years if they are to be effective. The state is increasing funding for wildland fire management programs; in association with CalFire it estimates that 23 million acres in its area of responsibility area would benefit from fuel reduction.

In some situations, low-tech solutions work best. Goats can graze even in inaccessible steep and rocky areas, efficiently devouring grasses, shrubs, and small trees to control vegetation growth and create firebreaks. Goat hire companies have sprung up in California and other western states to meet the increasing demand.

In addition to improved management of federal- and state-controlled land, communities in the WUI need to become more fire resistant. Towns have the fresh example of Paradise as an incentive to become more active. There are also many effective measures that individual homeowners can take, such as removing sources of fuel close to home to create a defensible space and removing debris from roofs and cleaning out gutters regularly. Insurance companies and organizations such as the Insurance Institute for Business and Home Safety, the California Chaparral Institute, and the National Fire Protection Association, to name but three, are actively encouraging homeowners in the WUI to protect themselves by taking simple steps like these.

The weather drives the growing season, and therefore the fuel supply, and determines how dry those fuels will be during fire season, which affects their ignitability. There is not much we can do about the weather, but steps can be taken to reduce the availability of fuel.

This article originally appeared in AIR's In Focus blog and is republished with permission.

Jonathan Kinghorn is the editor of In Focus. He is also a writer and editor with Corporate Communications at AIR, working on technical articles for trade and business publications, marketing collateral, client communications, web content and project deliverables. He is passionate about maritime history and published an award-winning book about the Atlantic Transport Line. He is also a certified museum curator and an avid runner.