Property destruction from the November 2018 Camp and Woolsey Fires in California shows a strong correlation with areas identified as at risk by FireLine®, Verisk’s wildfire risk management tool. Of about 20,000 structures destroyed by the two fires, nearly 98 percent were in areas deemed to present at least moderate risk for wildfire. About 58 percent were in high- or extreme-risk areas.

Of about 20,000 structures destroyed by the two fires, nearly 98 percent were in areas deemed to present at least moderate risk for wildfire.

Hot, dry conditions and high winds combined with abundant fuels enabled rapid fire spread. Trees and shrubs were the predominant fuels in the Camp Fire. Tree-dominated and wooded vegetation were the primary source of fuels, with mixed chaparral and grasslands to a lesser degree. About 50 percent of properties were on sloped terrain, and 16 percent presented access problems for firefighters, based on Verisk’s analysis.

The Woolsey Fire’s fuels consisted of brush and grass. Chaparral was the predominant vegetation, with coastal sage scrub also providing some fuel. More than 85 percent of properties were on slopes, and 18 percent had access problems.

In contrast to the above, substantially less than 5 percent of all California properties are associated with access problems, and around 25 percent of properties in the state are considered subject to moderate, high, or extreme levels of exposure to wildfire hazard. Generally, Verisk’s analysis found all three key factors—vegetative fuels, sloped terrain, and difficult road access—influenced wildfire exposure at the locations of the damaged properties. 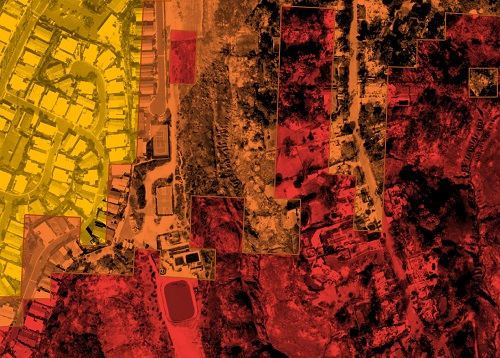 Experience, based on Verisk data and analysis, shows that about 90 percent (and sometimes even more) of wildfire-damaged property locations are usually associated with moderate to extreme levels of exposure.

In addition to these large and high-severity losses, wildfires produce other types of losses, such as smoke and ash damage, additional living expenses due to evacuations, business interruption, and more. Therefore, risk management strategies—covering underwriting, pricing, and concentration management across both personal and commercial lines—should consider several questions:

Kaitlyn Perham is a geospatial analyst at Verisk.