Update: Mental Health During the Pandemic

Per the press release, in many places throughout the world the COVID-19 pandemic has hindered the ability to provide mental health care to address such trends: examples include the disruption of healthcare services at institutions due to infection or concerns for infection, the conversion of some institutions to handle COVID-19 cases instead of patients in need of mental health care, and generally preventing patients from receiving face to face support with professional mental healthcare providers.

According to a September 2020 report in AAAS, despite people worldwide facing the fear of disease, trauma from being isolated at home due to pandemic lockdowns, depression related to wage reduction or job loss, and stress from daily exposure to pandemic-related media, less than 3% of scientific literature to date has investigated mental health during the pandemic.

That said, there are some studies that have been published related to mental health during the pandemic. In this post, we look at some of those studies, some related developments to address mental health, and we also provide some background information on mental health.

The Centers for Disease Control and Prevention (CDC) has published the results of a pandemic-related mental health survey conducted at the end of June 2020. Overall, the survey revealed that about 40% of the over 5,000 respondents reported an adverse mental health condition at a rate higher than in the second quarter of 2019; furthermore, symptoms of anxiety were reported three times more, and symptoms of depression were reported four times more than in 2019. Some details of the June 2020 results are as follows:

According to the CDC, the results of the survey are consist with the U.S. Census Bureau's on-going Pulse Survey which is collecting information on the "social and economic effects of coronavirus on American households" during the pandemic. 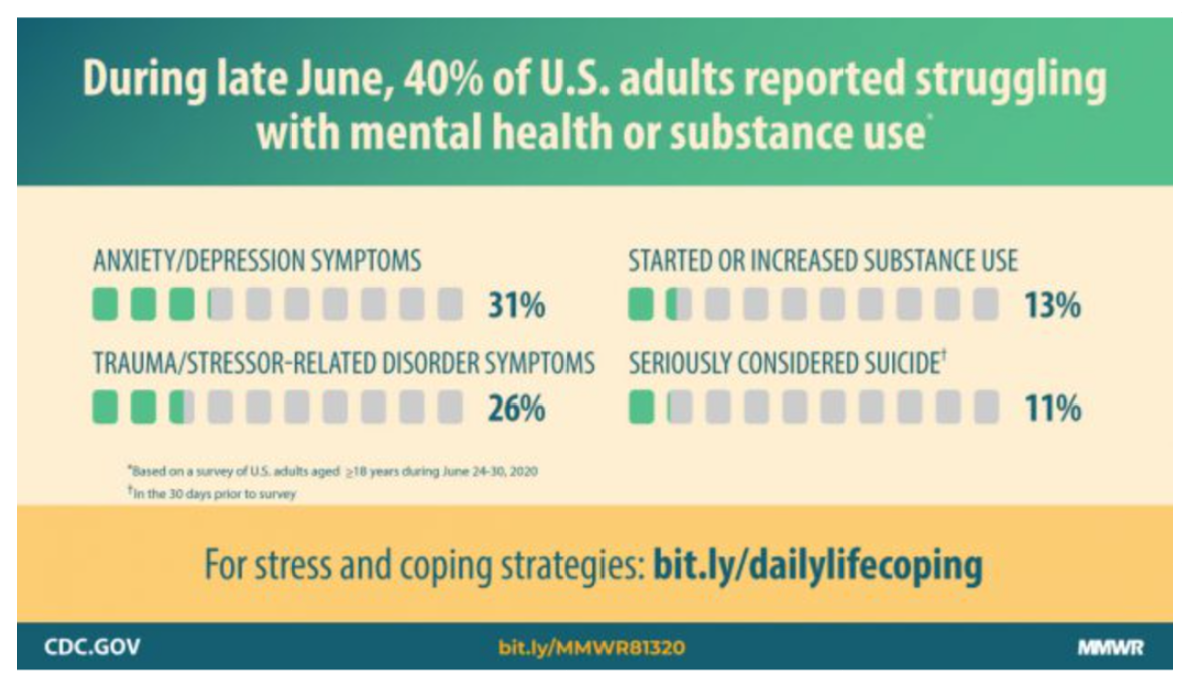 Depression and Financial Stress During the Pandemic

Researchers at Boston University conducted a separate study which compared the prevalence of depression symptoms in adults in the U.S. before the pandemic and during the pandemic. Per the study, researchers compared two population-based surveys 1) "COVID-19 and Life Stressors Impact on Mental Health and Well-being study, conducted from March 31, 2020, to April 13, 2020" and 2) "National Health and Nutrition Examination Survey, conducted from 2017 to 2018." The study results reportedly indicated the prevalence of depression symptoms tripled, and people with savings below $5,000 were associated with an increased risk of those symptoms.

A related article in Quartz provided the results of a survey that revealed how the experience of stress, anxiety and sadness during the pandemic as reported by over a thousand respondents differed by ethnicity, gender, and incomes above and below the U.S. average.

A related NPR article noted that there are several teen-focused mental health studies being conducted during the pandemic, and that

experts worry those studies will show a spike in suicide, because young people are increasingly cut off from peers and caring adults, because their futures are uncertain and because they are spending more time at home, where they are most likely to have access to lethal weapons.

According to NPR, most gun-related suicide attempts are fatal, whereas 94% of non-gun related attempts are unsuccessful, and often are never re-attempted. Per the article, gun sales have doubled from March to July 2020 when compared to the same period in 2019.

Of interest, the Times highlighted that the CDC study results show respondents aged 65 and over seemed to report fewer symptoms than the younger aged respondents.

Telemedicine and Mental Health Treatment During the Pandemic

The Center for Connected Health Policy lists under the term "telemedicine" or "telehealth" such applications as real-time video interactions between patient and provider done electronically instead of in-person. The American Psychiatric Association's website explains that that there is good evidence that telemedicine is effective in mental health treatment, especially for PTSD, depression and ADHD.

A related article in Vox reported that many mental health patients actually seemed to have benefited by the pandemic-related changes implemented to allow greater use of telemedicine for mental health treatment; many experts reportedly hope that post-pandemic, such changes will continue. For example, Vox noted that many restrictions have been temporarily adjusted for the pandemic resulting in the ability for mental health providers to work across state lines and to receive fees from Medicare, Medicaid, and private insurers often equal to in-person visits, thus promoting the use of telemedicine to a larger population that needs it. Furthermore, Vox noted that since currently one in three counties do not have a licensed clinical psychologist and that experts forecast a shortage in mental healthcare workers by 2025, the changes during the pandemic may have revealed how effective telemedicine could be.

(For more on Telemedicine, see our topic page)

Some Background Information Regarding Mental Health

What is Mental Health?
According to the U.S. Department of Health & Human Services,

Mental health includes our emotional, psychological, and social well-being. It affects how we think, feel, and act. It also helps determine how we handle stress, relate to others, and make choices. Mental health is important at every stage of life, from childhood and adolescence through adulthood.

Some Risks related to Mental Health

Occupation
According to a 2014 study published by the National Institutes for Health (NIH), the rate of depression may differ by occupation. Per the study, in decreasing order, the following were the occupations that were above the national average:

Driving
According to a 2017 study, depression was associated with double the chance of a car crash. The use of antidepressants reportedly seems to increase the risk of a car crash by about 40%. A 1999 study found an increased risk of a car crash when the driver self-reported suicide ideation 12 months prior to the crash.

More specifically, a 2017 review of research noted that :

For those with major depressive disorder, [one study] found that people with depression, even when not on anti-depression medication, experienced higher levels of sleepiness when driving. This was found to impact their capacity to maintain appropriate speed when driving in a simulator. In addition, it was found that people with depression showed a significantly slower steering reaction time, and a greater number of crashes, as compared to controls. The level of slowed reaction time was not related to the level of severity of symptoms. When not sleepy, road position, speed and speed deviation were no different to those of controls.

Natural disasters can have lasting effects on mental health. For example, according to a study by Rice University, over 20% of respondents to surveys by researchers reported "changes in behavior, depression, anxiety, sleep problems, or memory" attributed to the aftermath of Hurricane Harvey and continue to be experienced during the torrential rainstorms and Tropical Storm Imelda that arrived 2019.

"The national Disaster Distress Helpline is available to anyone experiencing emotional distress related to COVID-19. Call 1-800-985-5990 or text TalkWithUs to 66746 to speak to a caring counselor."

SAMHSA’s National Helpline is a free, confidential, 24/7, 365-day-a-year treatment referral and information service (in English and Spanish) for individuals and families facing mental and/or substance use disorders."