Subsidence, heave, and other risks beneath: Why insurers can’t rely on just one data source

When developing a peril-specific rating plan for subsidence, heave, and other ground movement risk, property insurers can’t afford to rely on just one data source.

The likelihood of ground movement–related claims for a particular property is dependent on a whole host of factors, including geology, vegetation, and rainfall, along with property characteristics. If these variables and how they interact together haven’t been properly accounted for in an insurer’s models, chances are the insurer isn’t accurately rating these perils in its book of business. 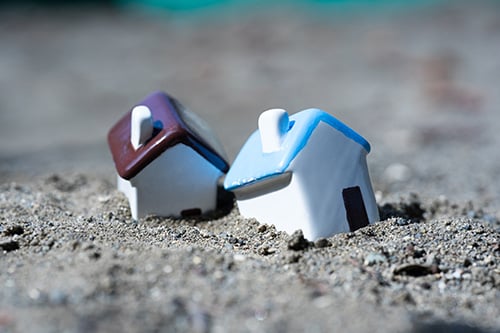 Subsidence occurs when the ground beneath a property collapses or gradually sinks lower, most often occurring during prolonged periods of hot, dry weather.

Statistics from the Association of British Insurers (ABI) show that July, August, and September of 2018 featured the highest level of subsidence claims since the 2006 and 2003 heat waves. More than 10,000 households made claims worth £64 million during this period, up from £14 million—a 350 per cent increase year over year.

The average subsidence claim is said to be between £10,000 and £15,000, and the British Geological Survey (BGS) estimates that one in five homes (or 6.5 million) in the UK is at risk from this peril.

This year has perhaps brought a sigh of relief for some UK property insurers, because while temperatures may have broken records, 2019’s summer was much wetter than last year’s. But wet weather can also create excess water, causing ground beneath a property to swell and move upwards, known as heave, leading to similar levels of damage.

Property insurers need to be able to deconstruct the risk profile of a property by individual peril to rate more accurately with a better evaluation of true loss exposures. By developing a peril-specific rating plan for subsidence and other ground movement risk, insurers can rate policies more accurately, increase market share, reduce loss ratios, and lower combined ratios.

Verisk uses the latest property data—together with detailed vegetation and tree data, geology, long-term climate data, and claims—to model the level of subsidence, heave, and other ground movement risk for insurers. It’s the unique interaction of these variables that helps insurers more accurately rate such perils.

Greater than the sum of its moving parts

Damage from ground movement can manifest in a number of different ways, and there are several ground types and conditions identified by BGS that either create or exacerbate the issue:

Houses built on shrink-swell clay soil are among the most likely to claim for subsidence damage. It’s estimated that 70 per cent of domestic subsidence claims are a result of clay shrinkage.

The level of moisture in the ground that causes the clay to shrink is influenced by whether there’s been a sustained lack of rainfall, how hot and dry the weather has been, and to what extent vegetation and trees have been soaking up water. Other external causes of subsidence are leaking drains and erosion due to flooding.

One of the biggest areas at risk of subsidence and heave is in the southeast, where there’s a band of expansive clay soils highly susceptible to changes in volume that extends through North London toward the northwest in a slanting line toward Oxford.

If insurers are simply looking at whether a property is situated on this band of clay and don’t consider how different factors such as rainfall, vegetation, property characteristics, and historical claims come into play, they’re potentially missing out on business in places where they’re overestimating the risk or taking on risk where they’re underestimating a property’s full exposures.

For example, an area of modern housing is much less likely to be affected by subsidence than an area of older housing that’s been affected in the past, with many of its most vulnerable properties strengthened by partial or full underpinning.

Property type should also be considered. Single-storey dwellings such as bungalows are lighter structures and are more vulnerable to damage through smaller amounts of ground movement than larger structures.

The density of vegetation cover is also important, because a property surrounded by large trees is potentially more likely to have groundwater soaked up beneath it.

What the future holds

It’s hard to predict when the next subsidence event year will be. The number of subsidence claims reached the highest level in more than a decade in 2018. Before that, it was the heat waves of 2006 and 2003. Double event years can also occur, as was seen in the summers of 1990 and 1991.

Climate change may make claim volumes in the future more volatile, so it’s increasingly important that insurers use mapping technologies and external data models to better understand their exposure to a worst-case scenario.

Verisk uses a series of unique data sources for rainfall, vegetation, and geology and cross-references this with property characteristics and historical claims data.

If insurers price correctly, they’ll be able to expand into low-risk areas that may have previously been perceived to be high risk and underwrite more confidently.