Trading Away a Collaborative Future

October 7, 2019 - The ongoing trade war between the United States and China has dominated headlines in 2019, feeding market uncertainty and stoking fears of a global recession. But less publicized is the worldwide rise in trade tensions and tariffs during the past decade. Near-term economic distress could be the least of our worries if the impulse toward closed markets continues. Over the next decade, growing protectionism—the use of import taxes to discourage international trade—could become a political tinderbox.

As today’s market instability becomes tomorrow’s stalled political agendas, there’s greater potential for conflict. Political leaders unable to deliver on promises of financial growth have turned to nativist rhetoric and trade restrictions, as they have throughout history. Resulting international tensions severely restrict international cooperation, potentially crippling our collective responses to critical issues such as climate change, global infrastructure needs in areas like 5G and waste management, and the continuing refugee crisis. Domestic unrest fueled by this cycle of financial instability and reactionary politics could snowball, just as protectionist governments and international strife hastened the global wars of the 20th century.

The rise of market instability

Between 1990 and 2008, global trade in goods and services rose from 39 percent of the world’s gross domestic product to 61 percent. Since then, it’s fallen to 58 percent as governments have grown skeptical of the promises of globalization, and current events seem to indicate a continued decline.

The Brexit referendum—largely premised on wresting control of the United Kingdom’s trade policy from the European Union—and the ensuing political upheaval in the UK represent a prominent manifestation of these risky policies. A Bank of England study found that Brexit has cost the country 3 percent of its national income in the three years since the UK declared its intention to leave the EU—just one example of the vote’s dampening economic effect. Amid uncertainty over the timing and ultimate impact of Brexit, domestic inflation has risen, productivity has fallen between 2 and 5 percent, and there are growing worries of a recession.

But those impacts are not confined to the UK. Economists expect the Eurozone’s quarterly GDP to drop if a no-deal, or “hard,” Brexit takes place. That could damage Germany’s economy, which relies heavily on exports. The higher cost of U.S. goods in the UK following a drop in the value of the British pound against the dollar, combined with lower demand in Europe as major economies take the hit of Brexit, could create harmful ripple effects in the United States and the wider global economy.

The U.S.-China trade war provides another glaring example. By the end of August 2019, tariffs had already cost U.S. consumer electronics companies an estimated $10 billion. Another tariff hike in September and additional tariffs expected in October and December raise the prospect of higher retail prices for popular items during the busiest season of the retail calendar. If, as expected, the costs for nondurable goods (such as food and clothing) begin to rise over the next few months, economists estimate each American household will pay $300 to $1,000 more per year for the same products they currently buy. 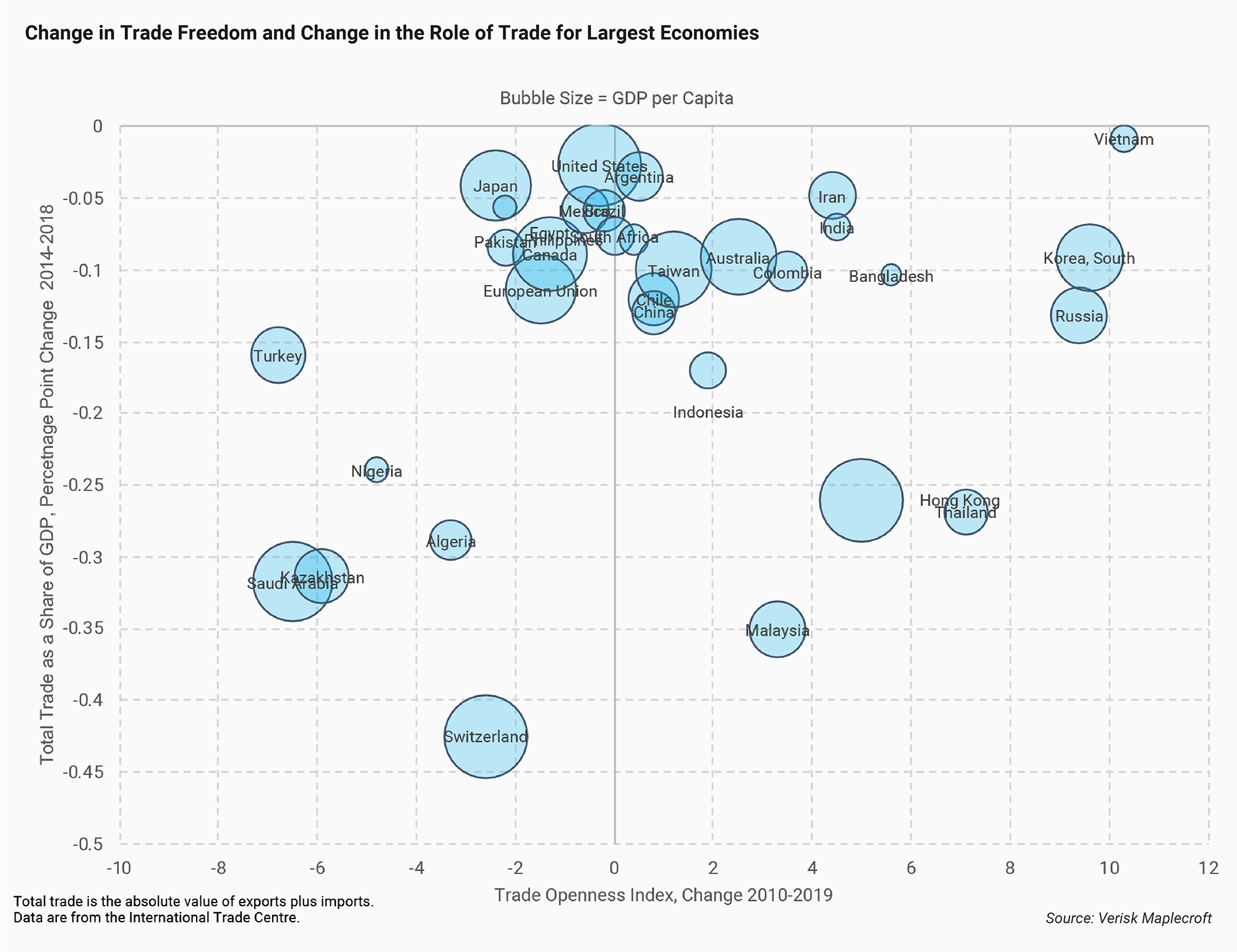 Market instability can threaten the political establishment. Lack of economic progress generates a backlash from voters. That backlash fractures the political landscape, making it difficult for any party to implement a policy agenda. Often, politicians blame foreign trade for these domestic political challenges, further inflaming protectionist tendencies. For instance, far-right parties with Eurosceptic leanings won roughly 25 percent of the seats in the 2019 European Parliament elections, the best outcome yet for the nationalist wing. Although these parties represent a variety of state-specific goals, limiting foreign trade and immigration tend to be a unifying factor.

We’re already seeing harbingers of how this cycle unfolds domestically. Brexit has pushed political risk to unprecedented levels by bringing the UK’s parliament to a virtual standstill as lawmakers attempt to find a mutually agreeable strategy for leaving the EU, and the potential for renewed violence at the Northern Ireland border is a looming concern. Across the Atlantic, political gridlock has led to drawn-out negotiations over the U.S., Mexico, and Canada free trade agreement, which has languished almost a year in limbo as the Trump administration and Congress hammer out their differences.

On the international front, rising protectionism has also coincided with an increase in negative diplomatic exchanges between countries, especially among the G20. In recent years, emerging economies such as Brazil and Argentina have sought more expansive trade policies just as developed economies have retreated in the opposite direction. And trade tensions often infringe on the debate of other global issues, such as climate change. For example, friction between European leaders and Brazil’s president Jair Bolsonaro flared during the recent G7 summit, when France’s Emmanuel Macron threatened to block a trade agreement with the Mercosur trade bloc (consisting of Argentina, Brazil, Paraguay, and Uruguay) if Bolsonaro failed to bring fires raging in the Amazon rainforest under control.

Potential for a vicious cycle of rising risk

The rising economic uncertainty generated by trade disputes makes markets jittery. Failed economic promises deepen domestic political divides, and the potential for upheaval increases. So far, the global economic damage from Brexit and the U.S.-China trade war has been largely contained. But given the uncertain political terrain of a post-Brexit UK, the contentious upcoming U.S. presidential election, and the rumblings of international conflict between emerging nations and developed economies, the situation is laden with risk for escalating financial distress. If these concerns are not addressed now, rising protectionism could spark a new era of international strife, one that could play out on the battlefield—including the virtual one (online).

The rise in diplomatic sniping may resonate with domestic audiences distrustful of foreign powers, but at a high cost: the loss of international cooperation. The global community’s inability to work collectively toward solutions to worldwide concerns, such as reducing carbon emissions, combating food insecurity, and tackling emerging diseases, would have a far greater negative impact than any failed trade agreement.

“By the end of August 2019, tariffs had already cost U.S. consumer electronic companies an estimated $10 billion.”

We still have the opportunity to avoid bleak outcomes, but political will and dedicated international effort are required. Governments and the business sector need to work together to reinforce trade norms, and actors across the political spectrum need to cease exploiting domestic tensions that encourage nativism. We can no longer afford to trade short-term advantages for long-term instability. Taking the risk of the rising protectionist tide seriously is the first step to a more collaborative global mindset.

Risks to Face as Drones Move from Novelty to Necessity

Tomorrow's UAVs are not the tech curios we see today. Their advanced capabilities will raise questions about privacy, security, and safety.

Waste Is No Longer an Issue the World Can Ignore

Can We Make Online Life Safer?