Behind the scenes of the global economy, the future of waste has emerged as one of the leading risks facing our planet over the next decade. The scale of the issue is sobering: Verisk Maplecroft has found that 2.1 billion metric tons of municipal solid waste (MSW) are generated globally each year, and the World Bank expects 3.4 billion metric tons will need to be dealt with annually by 2050. (A metric ton equals 1,000 kilograms or 2,205 pounds.)

Until recently, much of the world has enjoyed the luxury of waste as an invisible issue. People deposit their trash outside and it vanishes, thanks to a municipal fee and a small army of workers in the waste disposal industry. However, taking into account changing international waste treaties, accelerating global consumption of plastics, and the unpredictable impact of climate change, humanity could soon find itself overwhelmed by its own garbage.

“The United States, which accounts for 4% of global population, produces 12% of global municipal solid waste.”

A miracle product becomes a nightmare

However, plastic remains vital in modern societies, and to disentangle this cheap, convenient material from our lives will be a difficult undertaking. Industries producing everything from clothing to food to pharmaceuticals rely on plastic as a source material and, perhaps more important, for packaging. The roughly 70 percent increase in annual global waste expected over the next three decades will be driven largely by growing populations and increased urbanization. To meet consumer demand without accelerating the risk of unmanageable MSW, we must offer future generations a viable alternative to current production models. In part, this will mean packaging made from greener materials and the reduction of single-use items; this is already beginning, as can be seen in aggressive moves to ban plastic bags in more than 90 countries. But real change will also require pursuing new frameworks such as a circular economy model, an economic system designed to continually renew resources and eliminate waste. 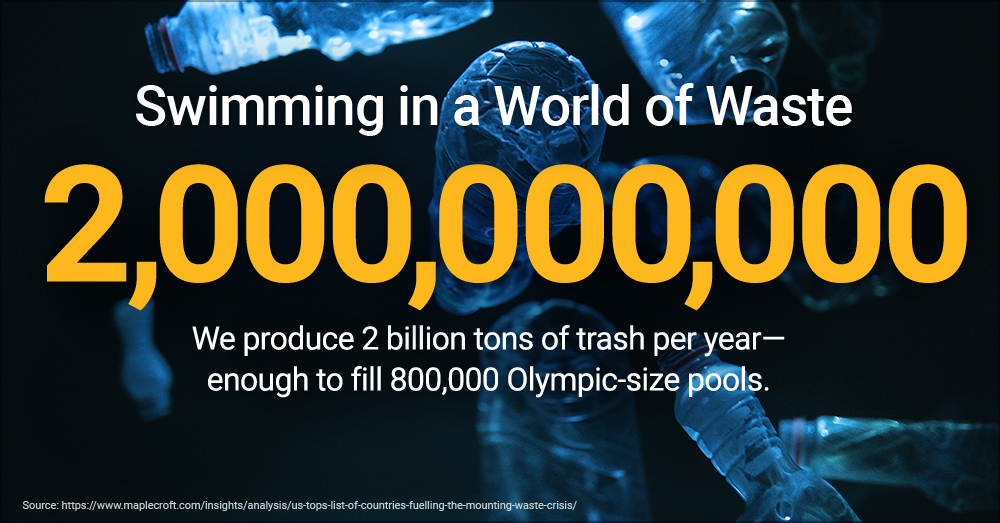 Could two nations actually go to war over trash? Philippine President Rodrigo Duterte threatened just that in 2019 during a dispute over waste shipments from Canada. The crux of this and other related conflicts is that developed nations produce vast amounts of waste disproportionate to their population size, and poor countries are increasingly refusing to be the world’s dumps. An actual war is highly unlikely (Duterte is known for his extreme rhetoric), but geopolitical clashes will likely escalate as waste piles up.

For example, the United States, which accounts for 4 percent of global population, produces 12 percent of MSW (which includes everyday refuse created by the public). In contrast, China and India, which make up 36 percent of the world’s population, generate 27 percent of MSW, according to Verisk Maplecroft. China accepted large imports of recyclable MSW until 2018, when it banned imports of 24 types of solid waste, including many plastics.

Since then, local authorities in the United States, the United Kingdom, Australia, and elsewhere are struggling to find alternative solutions. When other nations were willing to take unwanted waste with a promise to recycle, there was little incentive to invest in adequate infrastructure for recycling plastics at home. Now, many municipalities are resorting to incinerating plastics. The new Chinese policy is expected to displace about 111 million metric tons of plastic refuse by 2030. In the U.S. and other countries that produce more than they recycle, if domestic recycling infrastructure can’t catch up to waste generation, we’ll face a world of waste with nowhere to go.

Business at a crossroads

Forward-thinking companies are already shifting away from adding to the MSW problem. But pressure will rise as waste management creeps into the spotlight, with the environmental impact of plastics increasingly grabbing media attention and the need for expanded waste infrastructure making the issue literally part of the developed landscape. Fast fixes, such as finding a new country to absorb waste without proper vetting, could backfire. Verisk Maplecroft has found that many countries with the potential to accept waste imports, such as Bangladesh or Nicaragua, have a high percentage of mishandled waste and are unlikely to receive the investment necessary to improve their waste systems.

Consumer-facing brands could face major reputational damage should their products be found in emerging environmental crises; any brand would be horrified to discover pictures of its label floating among dead sea turtles. And increasingly, investor pressure will be applied to companies that don’t answer directly to consumers. The sustainability commitments of sovereign wealth funds, for example, are growing increasingly stringent. Businesses that don’t take waste concerns seriously risk alienating customers, investors, and governments alike. 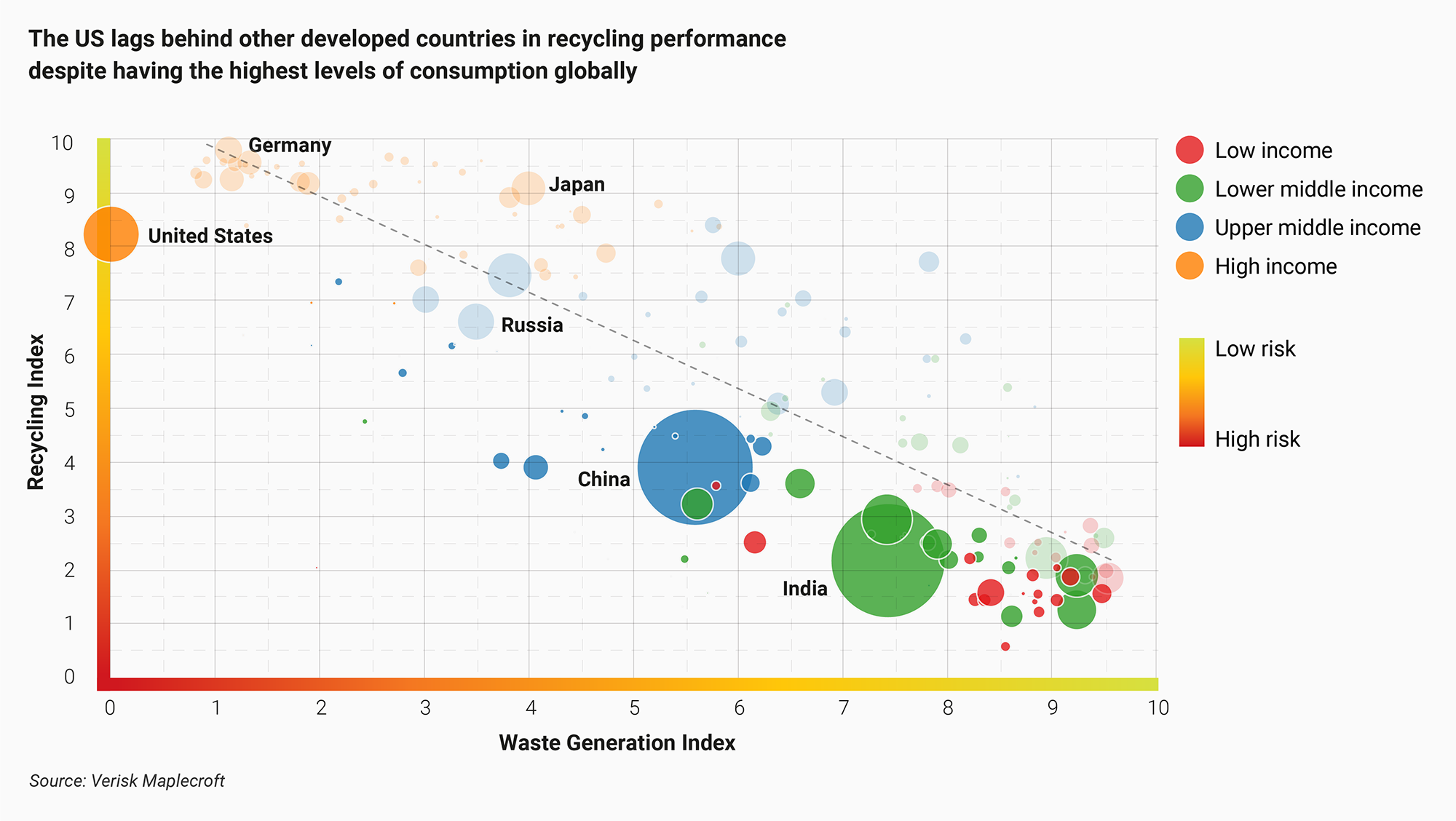 Can we avoid a garbage-filled future?

It remains all too easy to ignore the risk that garbage poses. While some waste issues have come to light in recent years, the scale of our garbage problem remains invisible to much of the world population. The needed solutions are hard for politicians to champion or celebrities to endorse: comprehensive, long-term waste policies; considerable funding for recycling infrastructure; and the adoption of new economic paradigms that value renewal and investment over extraction and consumption.

However, the road ahead is not hopeless. Some countries are already heavily investing in programs that turn waste into renewable energy sources: Japan processes 70 percent of its MSW in waste-to-energy facilities. Taiwan has developed “one of the world’s most efficient recycling programs” after being known as “Garbage Island” as recently as 1993. The carpet industry has been a pioneer in business-minded waste reduction, diverting more than 5 billion gross pounds of postconsumer carpet from landfills in the U.S.—much of it converted into new products—since the founding of the Carpet America Recovery Effort in 2002. Consumer-facing companies such as Starbucks and McDonalds have led high-profile campaigns against plastic waste and have embraced greener packaging. And countries such as Rwanda and Germany are making huge steps in reducing plastic use and waste.

This is a threat we can avoid, but we must affirm our commitment to do so now—before the world’s refuse challenges become insurmountable.

The Darkening Cloud of Digital Vulnerability

Navigating the Perilous Path to a Successful Energy Transition

The Unintended Consequences of Artificial Intelligence