Navigating the Perilous Path to a Successful Energy Transition

Our collective course toward renewable energy is picking up speed. Globally, the Paris Agreement and the UN’s Sustainable Development Goals are making headway. And although the United States—which consumed a record amount of energy in 2018—is not committed to the Paris Agreement, change is afoot there as well. Wind and solar output continues to rise, constituting 8 percent of total U.S. electricity generation in 2018, up from 7 percent the previous year. And fossil fuels, which accounted for 94 percent of total U.S. energy consumption in 1966, provided 80 percent of our energy in 2018. Renewables are vastly cheaper than even a decade ago; electric vehicles are on the rise; and consumers increasingly demand renewable energy, regardless of government policy. In the United States, 80 cities, five counties, and two states have committed to running on 100 percent renewables, with six cities already achieving that goal, according to the Sierra Club.

U.S. public sentiment is clear: The switch to 100 percent renewable energy is overwhelmingly popular across the country (although some regional differences exist). Energy companies, on the other hand, are concerned about a quick transition from fossil fuels. They’re wary of the dependability of renewable energy technology supporting vital societal functions and concerned by the expense and difficulty of installing new infrastructures. They’re also acutely aware of the financial impact of being saddled with “stranded assets,” such as productive oil wells that suddenly become commercially unviable. No corporation wants to find itself in the position of the once-mighty Blockbuster, stuck with millions of video tapes that turned from assets to liabilities virtually overnight. 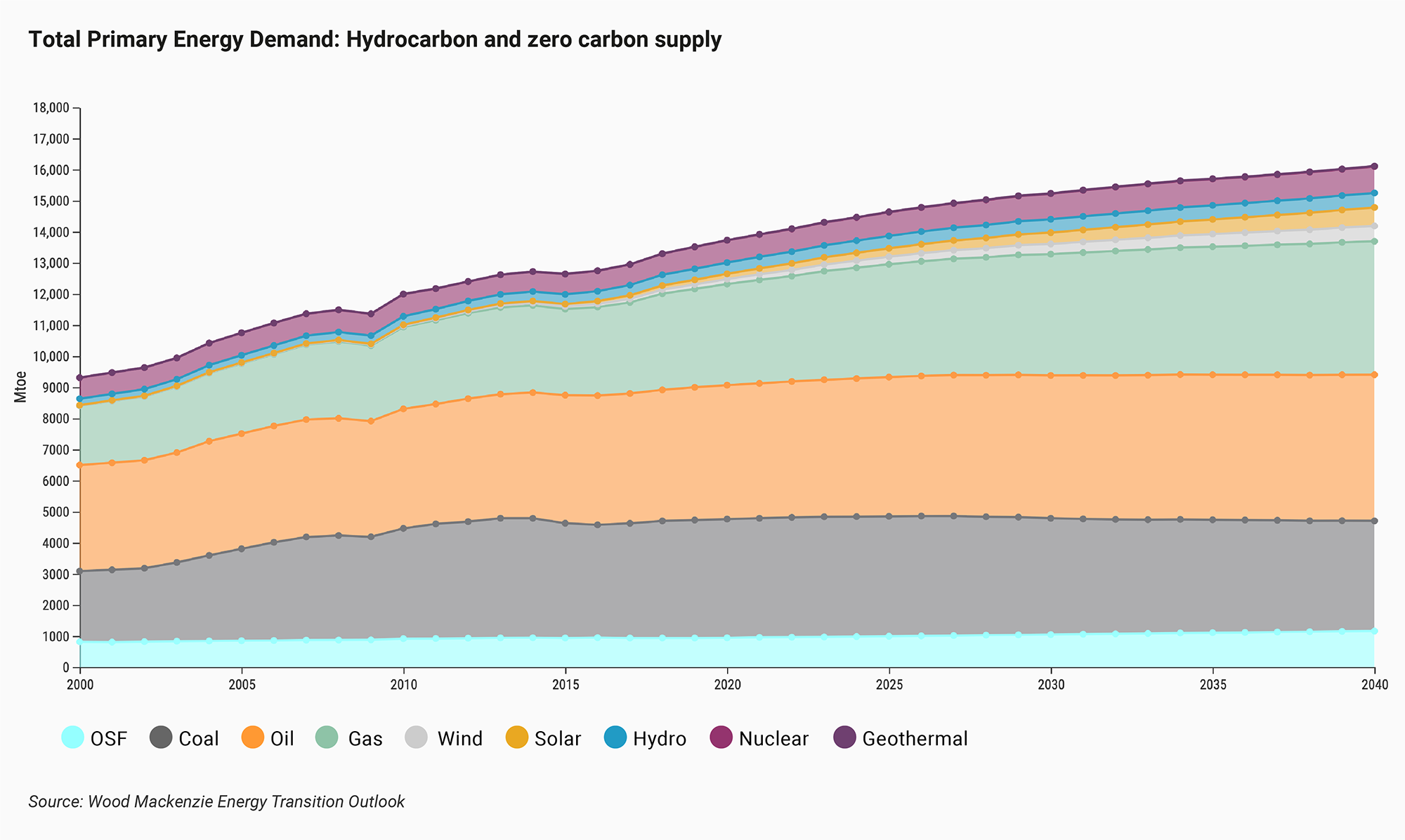 The threat of a slow transition

The consequences of continuing with current levels of fossil fuel use would be calamitous. Wildfires would become more frequent, droughts more intense, and the duration and intensity of tropical storms would increase. One example of what we might expect can be found in Hurricane Dorian, the Category 5 storm that devastated the Bahamas in September 2019. This single storm caused an estimated $7 billion in damage; in 2017 and 2018, 30 weather and climate events each caused damages of $1 billion or more.

Risks for companies are dramatic as well. One study found that nearly half of the world’s 500 largest companies could lose $1 trillion by 2023 due to higher operating costs, decreased production capacity, and supply chain interruptions caused by climate change. For instance, cooling costs will rise for the massive data centers needed to run the world’s technology, while increased rainfall and flooding in Southeast Asia could disrupt electronics manufacturers.

On both an environmental and economic level, an unnecessarily protracted transition to renewable energy could be disastrous. That doesn’t mean, however, that a full-throttle embrace of renewable energy sources is on the horizon.

The economic risks of a hasty transition

To understand why not, let’s start with a different question: What if our energy transition happened more quickly than expected?

Let’s focus again on the United States. It would cost an estimated $4.5 trillion to transition the power grid to renewables over the next few decades. (By comparison, the entire U.S. budget for 2019 is $4.4 trillion.) That figure includes not only installing the infrastructure for energy generation, such as solar farms and wind turbines, but also upgrading the nation’s vast power grid to handle transmission and distribution of these new sources.

“Climate change could cause half of the world’s 500 largest companies to lose $1 trillion by 2023.”

There’s also a NIMBY (“not in my backyard”) issue: While the general public overwhelmingly supports devoting more resources to renewable energy, those feelings can change quickly when a solar farm is proposed next door, wind turbines destroy a scenic view, or renewable energy infrastructure projects require negotiation with hundreds of landowners. Legal and zoning issues can make renewable energy development—theoretically a no-brainer due to consumer demand—costly and unappealing to investors.

Banks and investment firms locked in long-term financing deals with fossil fuel companies are also chary of moving away from an industry with which they’re tightly bound, fearing the death of a foundational industry that could have devastating economic consequences. The Governor of the Bank of England, Mark Carney, has been warning for years of a “carbon bubble” that could cripple the global economy if not properly addressed now, while there’s time for thoughtful transitions. If not carefully managed, the economic shock of rapid change can be dramatic. Take, for example, the decline of the U.S. coal industry: As coal production fell by nearly 30 percent between 2011 and 2016, the four largest U.S. coal producers saw their combined value fall from $33 billion to just $150 million, and the resulting loss of jobs and capital continues to ripple through American society.

Policymakers punt on a clear path

Governments must play a leading role in pushing the global energy transition forward, but political gridlock consistently threatens progress. The International Energy Agency estimates that rising demand for electricity and power system upgrades to better handle renewable energy will require investments of $2 trillion a year—70 percent of which is expected to come directly or indirectly from governments. But in the United States and other countries, politicians often disagree sharply on how to move forward on energy issues.

That uncertainty can lead companies to hit the pause button on potential investments, slowing vital infrastructure projects and causing negative economic consequences. In Australia, once-record-breaking annual investments in renewable energy projects fell sharply recently amid uncertain political support. In the United States, trade and policy issues have clouded the picture for major projects, including causing delays for the country’s first large-scale offshore wind farm. Clearing political gridlock will be an important step to keep our global energy transition on track.

The concerns of the energy sector, the public, and political and business leaders must all be addressed to avoid a transition that saves us from environmental chaos only to leave us in financial ruin.

While there are risks in accelerated progress toward renewable energy, the transition must move forward. Too-slow migration toward renewable energy would expose the world not only to financial risks but also far more consequential existential threats. Our current middling path is insufficient for the monumental task of migrating our energy sources responsibly. The road toward tomorrow’s energy sources must be determined with the input of governments and the energy sector alike to ensure a future that’s both economically and environmentally viable.