Five Emerging Risks in Our Skies

The commercial and social impact of drones is already undeniable. They deliver our packages, provide humanitarian relief, defend our nations, and even light up the sky at the Super Bowl. But this is just the beginning. The number of registered unmanned aerial vehicles (UAVs) in the United States is on track to triple in the next five years,[i] with rapidly advancing uses that speed up logistics, provide access to remote territories, and take on high-risk jobs to save lives.

With all these benefits, the drone has clearly “left the runway.” However, as with all emerging technologies, the advancements come with risks of an entirely different magnitude than those we face today. Certainly, the risk of a drone causing injury or property damage is real, but data suggests these incidents remain more anecdotal than systemic.

Tomorrow’s UAVs, however, are not the tech curios we currently see in our parks and skies. They’ll presumably have much greater payload capacity, agility, and imaging and data collection capabilities—all of which will require a considered conversation about the privacy, security, and safety trade-offs we’re willing to make as a society before thousands more of these devices become airborne.

“As drones integrate with AI capabilities – and a human being is no longer behind the controller – legal gray areas will only compound.”

Here are five systemic risks that Verisk believes will likely shape the drone debate in the next decade:

When a lightweight, battery-powered drone crashes, the damage tends to be contained. But as drones begin to carry heavier loads over greater distances, they’ll require denser energy sources, such as hydrogen fuel cells or gasoline/electric generators. These new fuel sources can result in accidents that more closely resemble the extensive and deadly wreckage of plane crashes than anything drones experience today. There’s important research underway regarding safety, such as geofencing technologies, signal sensing, and even good old-fashioned parachutes. But as a whole, we’re not seeing the extensive investment in drone safety advancement that we see in power sources.

Drones don’t recognize borders or property lines, and as such, they already raise privacy concerns. When outfitted with the latest high-resolution cameras and unprecedented freedom of movement in the near future, the debates will likely call into question our very notions of privacy and force societies to weigh what they’ll sacrifice for safety, security, and economic growth. How will private entities securely manage and store the information drones collect? Who will regulate drones gathering data internationally for non-state actors? As drones integrate with AI capabilities—and a human being is no longer behind the controls—legal gray areas will only compound.

Data Management May Be a National Security Threat

As UAV data processing becomes more sophisticated, national security concerns are expected to increase. Drones capture images frequently and refresh often. If sensitive images are accidentally or maliciously made public, nations could learn the location of others’ strategic defense mechanisms in the time it takes to upload a file. Additionally, monitoring enemy drones in a dense fog of UAV activity may grow increasingly difficult, and national borders could become more porous as intruders gain access to more sophisticated drones.

Domestically, those same capabilities may allow criminal and domestic terrorist opportunities that remain unthinkable today. For example, conventional vehicles for drug smuggling, like boats and cars, could become moot in the wake of drones capable of carrying heavy loads over long distances; fences and traditional police surveillance are no match for an unmanned and difficult-to-identify aircraft. In the past few years, there has already been an uptick in drone jail-smuggling incidents.[ii] This threat has become so serious that companies are beginning to deploy anti-UAV technology that uses radar systems to shoot down drones. Will our ability to combat this threat keep pace with the criminals who stand to make millions by evading detection? 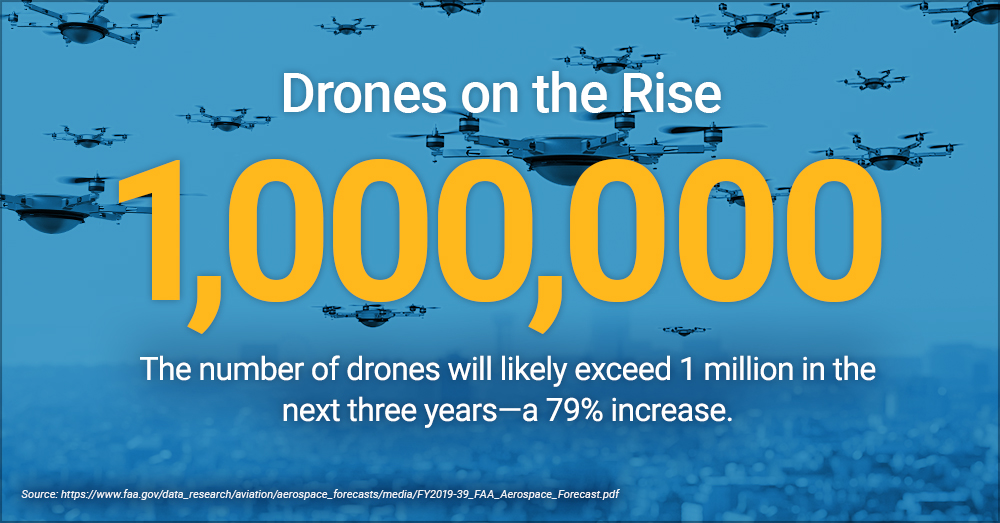 The drones of today are impressive marvels of technology compared to only a few years ago. Extrapolate this into the near future and you’ll find that drones are flying longer and in more populated airspace. Today, most drones stay near their pilots and the ground, as mandated by the FAA. As drone technology, and consequently their economic value improves, it’s anticipated that they’ll slowly intrude on the airspace traditionally reserved for manned aircraft and other commercial aviation interests. Without the proper protections in place, life-threatening collisions are all but guaranteed. It’s incumbent on private industry and those responsible for regulating the national airspace to work together in developing solutions for both legacy and emerging technology.

At Verisk, we have a team dedicated to following the evolving discussions at the regulatory and industry level. We’ve been among the first to help the insurance industry provide better coverage policies to businesses and individuals alike. This includes new solutions for homeowners that list drones among the factors covered and updated commercial policies to protect against drone accidents. At the same time, we’re working to help businesses that use drones to claim damage, giving them the business continuity needed for industry growth.

We’re also not the only organization seeking to spur the debate about UAV safety. The FAA is piloting efforts such as the Unmanned Aircraft Systems Integration Pilot Program and recently pledged $6 million in matching funds to help industry tackle the most difficult technical and operational challenges. Many other organizations are sponsoring their own efforts, but more needs to be done. Safety must become the starting conversation in drone technology, not the response to tragic events that occur along the trajectory.

Transitioning to Renewable Energy will be a Perilous Path