JERSEY CITY, N.J., May 8, 2017 — Private U.S. property/casualty insurers suffered a $4.7 billion net underwriting loss in 2016—following an $8.9 billion net underwriting gain in 2015—and experienced a 25 percent drop in net income after taxes to $42.6 billion from $56.8 billion a year earlier, according to ISO, a Verisk Analytics (Nasdaq:VRSK) business, and the Property Casualty Insurers Association of America (PCI).

Direct insured property losses from catastrophes striking the United States totaled $21.6 billion in 2016, up from $15.2 billion a year earlier and above the $19.2 billion average direct catastrophe losses for the past ten years.

Commercial lines direct written premiums expanded to $258.6 billion in 2016, a 3.1 percent increase from a year earlier, according to estimates from ISO MarketStance. The increase in direct premiums was mostly the result of exposure growth in small commercial and middle market risks, such as specialty trade contractors, building construction, real estate, and auto dealers.

"Catastrophe losses continued to hurt insurer performance in 2016. There were 43 catastrophe events in 2016, the highest number of such events since 1980. There’s no way around it—to underwrite catastrophic risk better, insurers need detailed and accurate analytics of weather and environmental perils. But last year’s catastrophe losses weren’t the only ones that affected insurers. Legacy losses also continued to hurt performance and were evidenced by reserve charges and several special reinsurance transactions designed to limit the development of carried reserves. Those legacy issues should serve as a strong reminder that insurers need to engage in disciplined underwriting now or pay the price for it later. Those insurers that use robust data and up-to-date policy language will be the best poised for success."

"Industry operating results during 2016 continued to hover near long-term trend lines—although with deterioration since 2013 in almost all categories, including premium growth, incurred loss and loss adjustment expenses, underwriting gains, and pretax income. Results were dragged down in part by soaring losses in personal and commercial auto, where accident frequency and severity continue to outpace premium increases and evidence suggests adverse development in reserves. Net investment income also worsened to the lowest level in decades, reflecting a long-term decline in net yield on invested assets. Despite the recent headwinds, policyholder surplus continued its steady growth to record levels, boosted by an increase in unrealized capital gains. But direct and net written premium increases since the last recession have still significantly lagged behind policyholder surplus and GDP growth."

Their annualized rate of return on average surplus dropped to 6.2 percent in fourth-quarter 2016 from 7.6 percent a year earlier.

View the full report from ISO and PCI and an analysis from ISO MarketStance here. 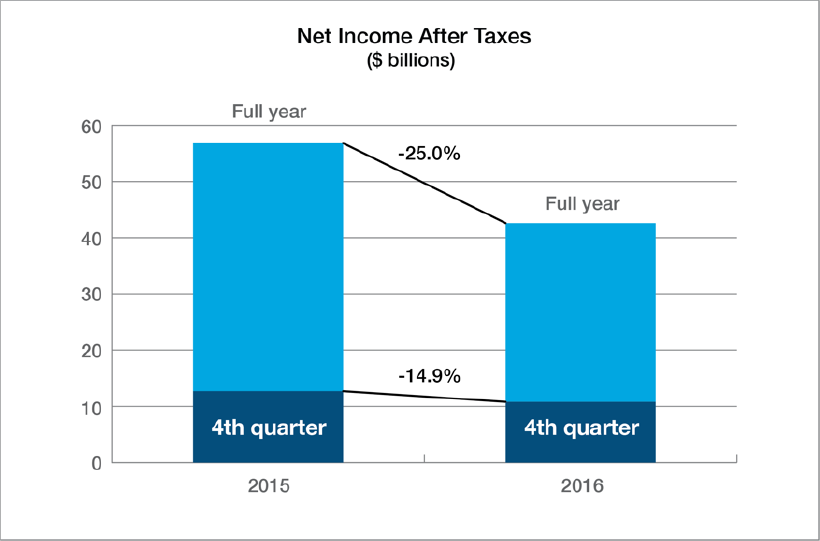 About ISO
Since 1971, ISO has been a leading source of information about property/casualty insurance risk. For a broad spectrum of commercial and personal lines of insurance, ISO provides statistical, actuarial, underwriting, and claims information and analytics; compliance and fraud identification tools; policy language; information about specific locations; and technical services. ISO serves insurers, reinsurers, agents and brokers, insurance regulators, risk managers, and other participants in the property/casualty insurance marketplace. ISO is a Verisk Analytics (Nasdaq:VRSK) business. For more information, please visit www.verisk.com/iso.

About PCI
PCI is composed of nearly 1,000 member companies, representing the broadest cross section of insurers of any national trade association. PCI members write more than $183 billion in annual premium, 35 percent of the nation's property/casualty insurance. Member companies write 42 percent of the U.S. automobile insurance market, 27 percent of the homeowners market, 32 percent of the commercial property and liability market, and 34 percent of the private workers' compensation market. For more information, visit www.pciaa.net.