Quantifying the financial and insurance implications of a solar eruption

People have been aware of the potential risks posed by solar storms to technology here on Earth for hundreds of years. The first prominent example of a Coronal Mass Ejection (CME) disrupting electronic systems dates all the way back to the so-called Carrington Event in 1859. This is still the largest solar storm on record and caused widespread outages of the telegraph system in use at the time.1 Technology has greatly advanced since the Carrington Event almost 150 years ago, and we are much more reliant on electricity now than we were back then. What would it look like if a CME the size of the Carrington Event hit the United States today? We’ll look at the possible effects of a CME of that magnitude, what the potential impact could be for property/casualty insurers, and what could be done to mitigate the consequences.

The sun frequently experiences solar storms that produce what’s called a Coronal Mass Ejection or CME. A CME is an explosion of billions of charged particles thrown into space from the sun. These particles move very quickly through space and can arrive at Earth in as little as 30-60 minutes after the CME is detected. These charged particles can cause geomagnetically induced currents (GIC) in the ground and have effects similar to an electromagnetic pulse.2 These geomagnetically-induced currents can cause significant damage to Extra High Voltage transformers rendering a significant number of them inoperable. There is not a significant number of backups for these transformers, and it’s very time-consuming and expensive to build new ones. The northern area of the United States would be most severely affected by a large CME due to its higher latitudes. The effects of a CME are normally confined to the far north but expand further south across the entire country as it increases in intensity.3 This could result in very large portions of the United States losing electricity for up to several months before we could get the electrical grid back online.4 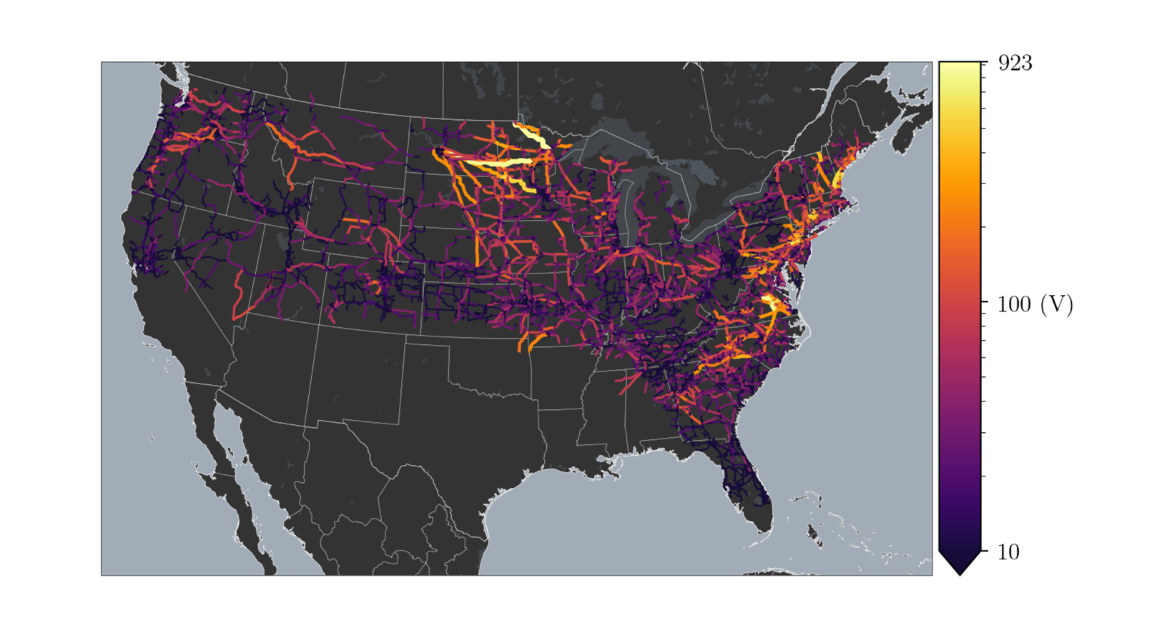 Damage explanation and effects on vehicles

The effects of a CME would be very similar to the effects of an electromagnetic pulse (EMP), causing damage to anything that runs on solid-state electronics.5 Looking at the results of a vehicle test for an EMP simulation will give us a good idea of the severity of damage that would be caused to vehicles by a CME. There have been several tests on vehicles in an EMP laboratory in the past few years. We’ll use the results of a test that was done by the U.S. EMP Commission.6

The U.S. EMP Commission tested a number of cars and trucks at the L-3 facility in Colorado. These vehicles were tested up to the level where some sort of malfunction occurred, at which point further testing was stopped on that vehicle. The result was either that the vehicle could be restarted, or the vehicle couldn’t be immediately restarted and would need to be repaired. The simulation tested 37 different cars with model years spanning from 1986 to 2002 and 18 trucks from 1991 to 2003. In the simulation, the intensity of the EMP was increased until either damage occurred or the intensity’s limit (approximately 50 kV/m) was hit. The test was conducted with both the engine turned off and on. The results showed that there’s no negative effect on the engine of turned-off vehicles.

In the car simulation at approximately 30 kV/m or above, 78.38% of all cars were affected. The impacts on the vehicles varied: 8.11% of cars were stopped, but they could restart, 2.7% had damaged electronics in the dashboard, and 67.57% showed some small malfunctions such as blinking dashboard lights. However, the higher intensity of the EMP field, the greater the number of cars damaged. This suggests that a powerful CME could lead to cars crashing on the road when the storm occurs.

Furthermore, the EMP will affect the electronic components of the vehicles.

Modern vehicles have many more electronic applications included in their system, with some having as many as 100 microprocessors that control virtually all functions. Although there are larger electronic components in modern vehicles, they can better survive more intense conditions because they have been tested under those circumstances, e.g., electromagnetic interference and electromagnetic compatibility (EMI/EMC).

In addition to damaging vehicles, a CME would also cause damage to physical property, like satellites. A CME can cause significant damage to satellites due to the solar radiation emitted, potentially causing low-orbit satellites to experience an uncontrolled re-entry.7 Or, in layperson terms, fall out of the sky. The estimated property damage incurred by satellites could roughly cost insurance companies anywhere from $218 million to $645 million.8

For insurers of residential and commercial buildings, there would be a significant exposure from the potential of frozen pipes. Almost everyone heating’s system requires some form of electricity to operate house or business during the winter. As we saw with the recent winter storm in Texas, when the power goes out for an extended period of time, and people aren’t able to heat their houses, the result is a large number of people dealing with frozen pipes. Insurance companies saw a huge volume of claims from these winter storms, with many of them declaring a catastrophe and requiring extra staff to handle them all. If a CME event, which would likely affect all of the northern states, were to happen in the winter, the number of resulting claims could dwarf the number of claims from the winter storms in Texas. About 20% of households in the northern part of the country rely primarily on electricity to heat their homes. Even homes that rely on alternate sources for heat need electricity to power furnaces that rely on other fuels.10 Insurance companies would likely be overwhelmed with property damage claims from both homeowners as well as business owners.

In addition to the effects on vehicles and physical property, there are several other possible exposures that would result from a CME taking out the power grid for an extended period of time. The largest exposure would be from businesses unable to operate while the power is out. Insurers could be faced with an overwhelming number of business interruption claims from businesses that can’t operate without electricity. The estimated loss for insurers from business interruption claims is between $50.98 billion and $318.86 billion.

Personal and commercial insurers would also have a significant exposure from perishable content spoiling. A prolonged power outage would result in both personal and commercial refrigerators being unable to operate for the duration of the outage. This would result in any perishable contents in a homeowner’s fridge or freezer spoiling and the possibility of millions of claims under household contents policies. The estimated loss from household contents claims would be between $449 million and $720 million. There would be an even larger exposure to commercial businesses that rely on refrigeration to keep their products from spoiling. In addition to industries that rely on refrigeration to keep food from spoiling, many pharmaceutical products such as vaccines need to be kept refrigerated. The potential losses to commercial insurers from perishable contents claims would be $1.079 billion and $1.79 billion.

Another possible exposure would be possible theft or civil commotion claims from businesses. With no electricity, businesses' security systems and electronic surveillance systems would only be able to function for a short time while its backup batteries lasted, about 24 hours.11 Lights and emergency services such as police and other civil authorities in large cities would also only be able to function for a short time during any prolonged power outage.12 This lack of security would greatly increase the risk of people stealing items from businesses, potentially resulting in a very high volume of claims for stolen merchandise. This lack of security would also increase the risk for potential civil commotion and riots, which could result in significant property damage for businesses, especially in larger cities.

A final possible exposure would be to auto insurers due to the likely massive reduction in driving. Gas stations rely on electronic pumps for people to refill their cars. With these pumps not working, people would be severely limited in where they could travel, and many would be unable to use their cars for an extended period of time. This could lead to a situation similar to the beginning of the COVID-19 pandemic, where insurers issued premium refunds or dividends to drivers due to their decrease in driving. This reduction in driving would also lead to a great reduction in the number of claims, possibly requiring some insurers to reduce their claim handling staff.

We can try to mitigate the effects of a solar flare by taking steps to prevent extra-high voltage transformers from being damaged and preventing loss of power. One way to do this is by improving our early-warning systems. If we had enough warning, electrical grids could be shut down before the CME arrived, and the transformers would not be damaged.13 Another way that the risk could be mitigated is by implementing engineering changes to transformers to mitigate the effects of a CME. Most of the proposed engineering changes that could be made rely on early detection of the CME, which may not be always be possible.14

There are also things that can be done to better prepare us in the event that a large CME results in an extended outage of the power grid. One way to accomplish this would be to expand the use of EMP-hardened solar panels that supply electricity directly to consumers. The solar panel itself contains relatively few electronics, but if they are connected to the main power grid, they could suffer damage during a CME. The CME would also cause damage to some of the components of a solar panel, such as the inverters or the charge controllers. These effects can be mitigated by upgrading a solar panel to one that is EMP hardened like the ones the military uses.15 Homes or buildings relying on solar panels would be able to have power restored quickly following a large CME.

While the chances of a large CME the size of the Carrington Event hitting the Earth are very low, there’s no doubt that if such an event were to happen, the results could be catastrophic.16 A large number of people could be without power for up to several months. Many vehicles would be damaged, presenting a large exposure for auto insurers. Property would be damaged, and millions of businesses would be forced to shut down, resulting in massive exposure for property insurers as well. There are some steps we can take to mitigate the effects of a large CME and some things we can do to help recover faster, but unless there are serious changes made or advancements in our ability to predict these events, these exposures will continue to loom.