The Latest on Water-Related Risks as Buildings - Including Schools - Reopen

What is Legionnaires’ Disease?

According to the Centers for Disease Control and Prevention (CDC), Legionnaires’ Disease “is a serious type of pneumonia (lung infection) caused by Legionella bacteria.”

The CDC notes that legionella was identified following a 1976 outbreak, in which a group of people who attended a Philadelphia convention of the American legion were inflicted with the disease. According to the CDC, case counts have been increasing since 2000. While the CDC website notes that Legionnaires’ disease is likely underdiagnosed, there were still 10,000 cases reported in 2018. 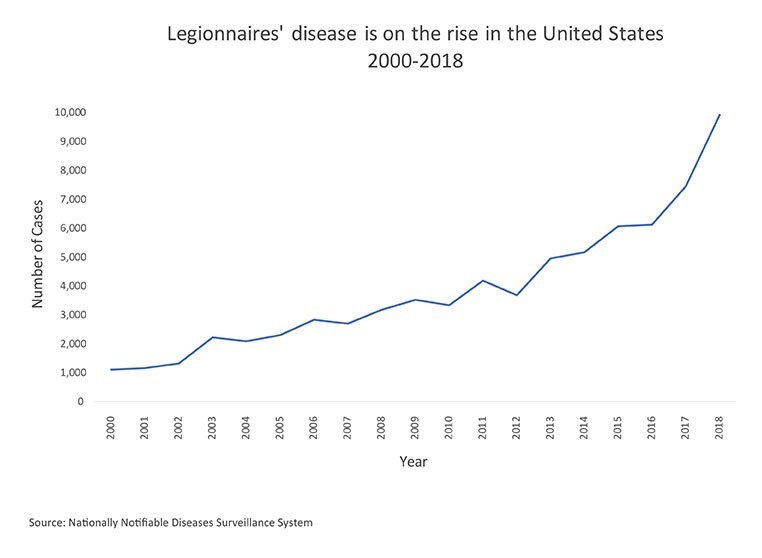 The CDC notes that the following groups of people that are at increased risk of being inflicted with Legionnaires’ Disease include:

Back in May, as buildings that had been vacant for weeks were slowly reopening, we posted about water risks that may emerge due to these extended closures. The post referenced some insights gleaned from a pre-print study produced by engineers at Purdue University, as well as an article authored by the environmental advocacy group Circle of Blue, including that:

Report: CDC Shuts Down Offices Due to Presence of Legionella in Water Sources

In August, the New York Times reported that the CDC themselves were compelled to close down some office space that they lease in Atlanta after Legionella was discovered in water sources at the sites.

While the beginning of this post touches on some of the known risks and concerns that correspond with Legionella, the Times article points out that, despite knowing about the bacteria and the disease since the 1970s, there remains different uncertainties, such as how it grows during a period of long-term stagnation. It appears that we may be able to get some more answers on that given the extended closures that transpired during COVID-19.

The COVID-19 risks relating to the opening of schools have been covered in-depth. We’ve also posted about the amplified cyber risks that may exist in the remote environment as well. And now, it appears that water-related risks should be regarded as a key concern as well.

The Environmental Working Group (EWG) recently noted that, while schools do close for the summer months, this period of time extended back into the Spring, possibly exacerbating the risk for water-related issues. Not mentioned in the article, but perhaps worth considering, is that a number of schools that typically may be open throughout the summer for various reasons were closed this past summer as well.

In addition to the potential of Legionella to be dispersed, the EWG article also cites lead, which is already a long-time concern, as a potential issue. Per the article, “[r]esults from one-time tests for lead contamination might not reveal the full scope of risk, because it can take three months of regular water use to effectively control lead in the water.”

Different reports of water-related problems are already popping up across the United States. In Pennsylvania, the Pittsburgh Post-Gazette reported that four schools detected “‘elevated levels of legionella’” in their water. Legionella was also discovered at an Ohio school as well, according to the Dayton Daily News.

For more on Legionnaires’ Disease, how it affects people, and why those who are inflicted with it may be more vulnerable to COVID-19’s most severe impacts, check out this GPB article here.