The Centers for Disease Control and Prevention (CDC) has published an early release article describing a COVID-19 study conducted in South Korea that used detailed contact tracing and examined age ranges from 0 to 80.

According to the article, the study generally analyzed data for over 60,000 people, analyzing transmission rates among different age groups and between people within households, as well as people outside of households.

The transmission rates were reportedly higher among people within households. However, per the article, the time period of the data was during a lockdown (January 20–March 27, 2020), which may account for the higher in-household spread, since families were encouraged not to go outside.

The article noted that overall, the study provided further evidence that the "[u[se of personal protective measures and social distancing reduces the likelihood of transmission."

What Can School Re-opening Communities Learn from the Study?

A related New York Times article also focused on the age groups and how the results may guide authorities that are preparing for the re-opening of schools in their communities.

One of the highlights of the study reportedly indicated that children 0-9 were less likely to transmit the COVID-19 virus than adults. This observation reportedly runs contrary to what experts typically observe during seasonal flu events when young children in day care centers. For example, these day care centers are typically considered a high risk of secondary transmission to household family members. Although not completely understood yet, the South Korea study reportedly appears to indicate that middle and high schoolers may infect at a higher rate than adults; behaviors from these groups may account for that, so more research is reportedly needed. 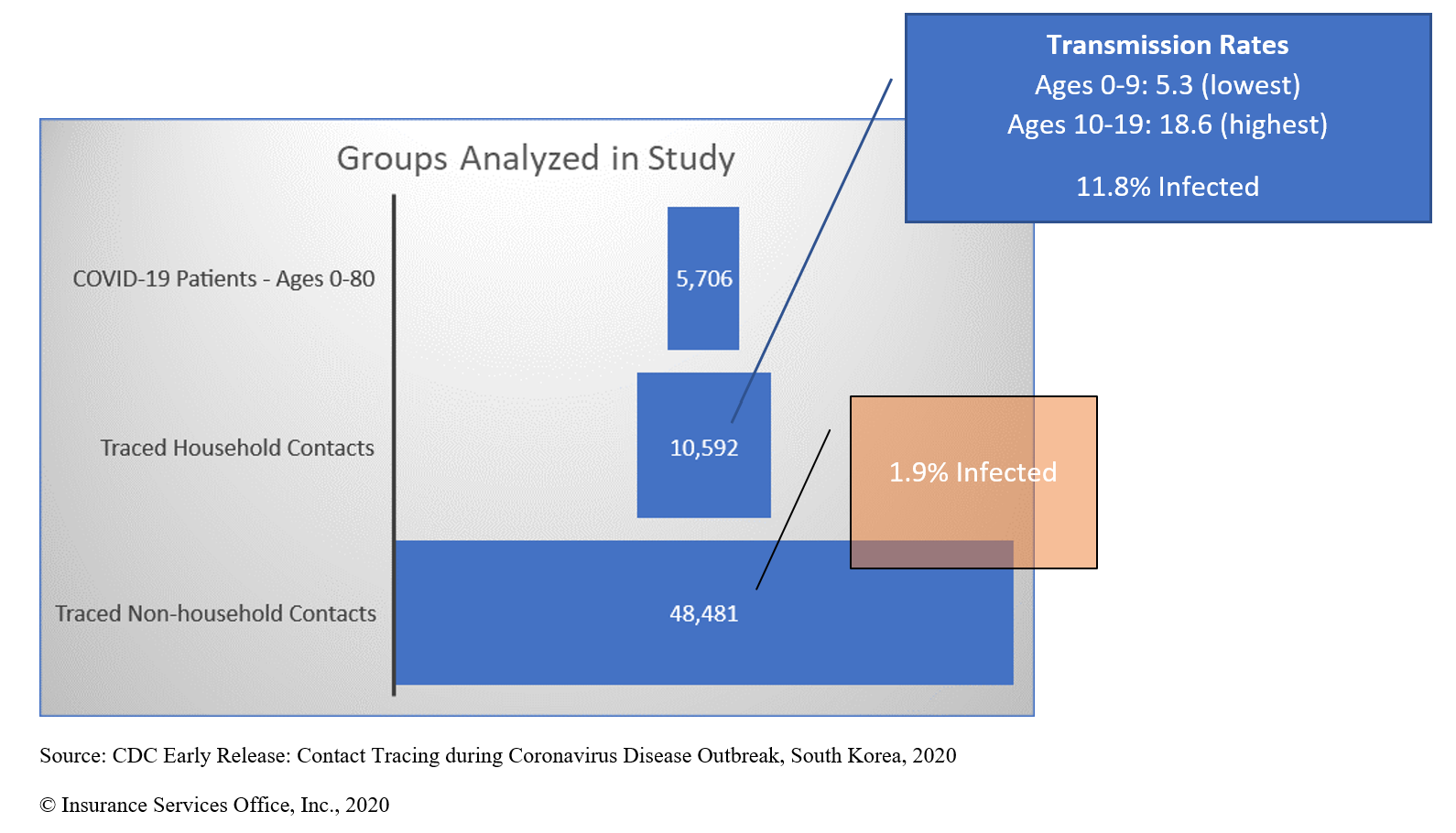 With that said, since household transmission was relatively higher among the ages 10 to 19 demographic, the researchers reportedly are encouraging authorities to consider this observation when developing mitigation strategies in communities where schools will reopen.

Regarding the reopening of schools, according to the Times, a scientific panel recently "recommended reopening schools wherever possible for disabled children and for those in elementary schools, because those groups have the most trouble learning online […and] the new study does not alter that recommendation."

Per the Times, the study results support other studies that suggest children under 10 are less likely than adults to transmit the virus. Why is that? Experts reportedly suspect less exhaled air volume—from smaller lungs—and that height might be a consideration. In other words, the altitude of the exhaled air may be below the air that more frequently reaches the taller adults.

Of concern, some experts have also reportedly considered the possibility that, although transmissibility from children may be lower than adults, the number of interactions with children from different households in a school may at least somewhat negate the reduced risk.

For Epidemiologists: The Pluses and Minuses of the Study

The Times article noted that this study has garnered particular attention from experts because previous, similar studies have had multiple flaws and included a smaller sample size.

Some limitations of the study reportedly include:

With that said, the quality of the contact tracing data is explained in the CDC article as follows: