We recently posted about a study released by the Centers for Disease Control and Prevention (CDC) that suggested, in part, that children aged 0-9 might be less likely to transmit the COVID-19 virus than adults.

The CDC has now released a new study on an outbreak of COVID-19 at an overnight youth summer camp in Georgia that seems to suggest otherwise.

According to the study, the camp had planned to run a six-day overnight program from June 21-27 for about 360 campers ranging in age from 6 to 19 years old, managed by about 250 staff members.

Per the study, the camp attempted to adhere to the CDC safety suggestions for camps such as requiring staff members to wear cloth masks. However, the camp reportedly did not mandate that campers wear cloth masks, nor did they require cabin doors and windows to be opened in order to improve air exchange. The camp also reportedly required all attendees of the camp to "provide documentation of a negative viral SARS-CoV-2 test ≤12 days before arriving" in accordance with the Georgia executive order which permitted the opening of such camps.

Campers were reportedly divided among 31 cabins with about 15 people in each one.

The study explained that orientation for staff began on June 17th, campers began to arrive on June 21, and on the evening of June 22 one staff member came down with chills. The camp subsequently sent campers home on June 24. The Georgia Department of Public Health (DPH) recommended all campers be tested for COVID-19 and the camp closed on June 27.

The researchers for the study reportedly were later able to analyze tests result for 344 (55%) of camp attendees, finding that 260 (76%) were positive for COVID-19, thus indicating an attack rate of about 44% (260 positive cases out of 597 camp attendees). The attack rate was reportedly the highest for staff members (56%) that had been attending the camp for the longest period of time. 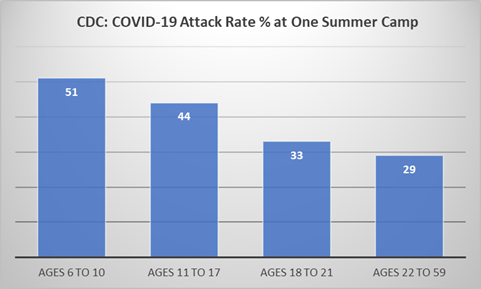 Per the study, of the positive COVID-19 cases (136) that included symptom reviews, only 100 noted symptoms like headaches, fever and sore throats, with 36 being asymptomatic.

According to a related article in Wired, when the camp was contemplating whether or not to proceed with the overnight program—once the state announced it could—parents urged the camp not to cancel it.

Per Wired, the youths suffered mild symptoms overall, and no hospitalizations were reported.

Wired added that the same camp organizer has been running overnight programs in other locations throughout the U.S. and has not seen another outbreak. Furthermore, Wired requested data from state health officials in several states, and only Vermont and Maine were able to provide data on summer camp illnesses; neither state has reported COVID-19 outbreaks in camps.

The researchers highlighted that the results provide further evidence suggesting the COVID-19 virus can spread with relatively high attack rates among children of all ages, in contrast with other earlier studies that indicate a lower propensity of viral transmission from younger children.

The researchers added that they suspect the "[r]elatively large cohorts sleeping in the same cabin and engaging in regular singing and cheering likely contributed to transmission."

Of note, the study listed some limitations that may have influenced the results, such as underreporting of test results, the potential of some transmission before and after camp attendance, and a lack of information about social distancing within the cabins.