Actually, It Can Happen to Us: Volcanic Event

“Humans have difficulty imagining things that we haven’t experienced yet.” – Alice Hill, senior fellow at the Council of Foreign Relations to the New York Times.

COVID-19 has been an eye opening experience across the world, especially for the risk management community. The catastrophic human and economic toll it has levied has served to reinforce that low probability risks simply can’t be dismissed – the exposures are too great.

This realization has served as an impetus for the ISO Emerging Issues team to dig into low frequency, high severity risks that can cause catastrophic damages. Our first two articles covered Solar Flares and an Earthquake in New York City; this piece will focus on volcanic events.

United States: What Is the Risk for a Major Volcanic Eruption? 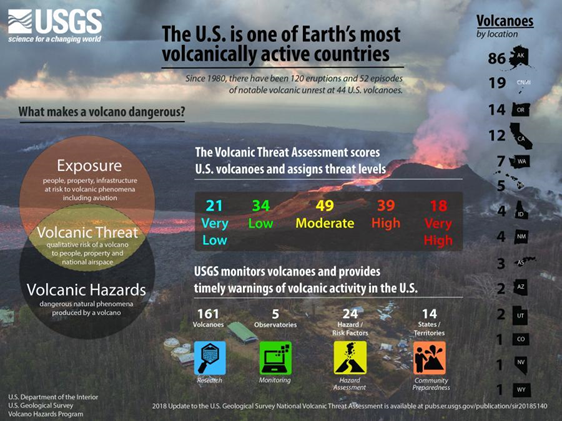 The 2018 Volcanic Threat Assessment was the second one released by the USGS, with the inaugural one provided in 2005. The USGS notes that these assessments are intended to support the development of a National Volcano Early Warning system –determining the volcanoes that may be at the highest risk for an eruption can help in prioritizing which volcanoes require additional research and monitoring.

Recent History of Volcanic Eruptions in the U.S.

In the past few decades, per the USGS, different volcanic eruptions have triggered damages and disruptions across the United States, including:

A commonly cited volcano that lies beneath Yellowstone National Park may have the capacity to launch a “supereruption.” While the New York Times notes that there is evidence of a Yellowstone eruption nearly 8.7 million years ago that scored an 8.8 out of 9 on the USGS’s volcanic explosivity index, research recently released in the journal Geology reportedly indicates that the next eruption there shouldn’t take place for another 900,000 years.

What Risks Do Volcanic Eruptions Pose?

It isn’t surprising that these natural disasters can trigger events that, depending on the source and magnitude of the eruption, can have catastrophic impacts – even at a global scale. Here are some volcano-related hazards that are listed on the USGS website.

Ash spewed from a volcano can pose major aviation risks, such as the clogging of air filters, engine erosion, and even complete engine failure. On the ground level, ash particles can affect the eyes as well as the lungs – these ash particles, according to the CDC, have been linked to a respiratory disease called silicosis.

The Mount St. Helens eruption demonstrated the scale of infrastructure issues that ash can cause. Communication equipment, agriculture, and water are just a few examples of items that ash can damage.

According to the USGS, a lahar “is an Indonesian term that describes a hot or cold mixture of water and rock fragments that flows down the slopes of a volcano and typically enters a river valley” and can resemble “a roiling slurry of wet concrete.”

As a lahar moves downstream, it can accumulate rocks and sediment, or even engulf buildings and bridges, thus picking up volume and speed and posing a significant threat to anything that is in its path. These events can increase the vulnerability of different areas to significant flooding incidents weeks after the lahar, as the USGS website explains:

Over a period of weeks to years after a volcanic eruption, the erosion and transportation of loose volcanic deposits can lead to severe flooding in areas far downstream from a volcano. Intense rainfall easily erodes loose sediment on steep slopes to produce lahars that travel onto flood plains and bury entire towns and valuable agricultural land. These rainfall-induced lahars can wreak havoc on rivers and streams, sometimes depositing so much sediment that chronic flooding also becomes a problem.

Pyroclastic flows, per the USGS, “contain a high-density mix of hot lava blocks, pumice, ash and volcanic gas. They move at very high speed down volcanic slopes, typically following valleys.” Similar to a lahar, pyroclastic flows are quite capable of destroying anything it encounters.

Lastly, landslides are a common byproduct of an eruption due to the steep nature of volcanoes, and can transform into a lahar as they move downstream.

One prominent gas that can be released in the midst of a large volcanic eruption is sulfur dioxide. During major volcanic events, sulfur dioxides can be launched into the stratosphere and subsequently be converted to sulfate aerosols that reflect sunlight and have a cooling effect on the Earth’s climate.

A blog post from AIR Worldwide, a Verisk company, notes that, “[w]hen Mt. Tambora in Indonesia erupted in 1816, the quantity of volcanic ash and sulfate aerosols injected into the stratosphere was so great that it caused a global veil around the entire planet for the next two years that lowered temperatures by as much as 3oC.”

Of note, this abrupt shift in climate had far reaching implications that even extended to risk of disease. AIR Worldwide explains:

Drought followed by unseasonal flooding altered the microbial ecology of the Bay of Bengal. The cholera bacterium, which has an unusually adaptive genetic structure highly sensitive to changes in its aquatic environment, mutated into a new strain. This was met with no resistance among the local population and spread across Asia.

Preparation and Response is Key to Mitigating Damages from Volcanoes

The aforementioned Mount St. Helens eruption of 1980 reportedly jumpstarted an era of growing volcanic research to ensure time to prepare – as well as to respond - to major eruptions. Suffocation, according to the U.S. Centers for Disease Control and Prevention (CDC), is the leading cause of death from an eruption. However, the CDC notes that the odds of adverse health effects resulting from a volcanic eruption are “very low” when warnings are appropriately heeded.

Similarly, advance knowledge of an imminent volcano eruption could potentially allow planes to adjust flight patterns and avoid crossing into an airspace laden with ash and other dangerous particles that can be a major threat to an airborne plane.

Natural disasters are humbling reminders of the sheer power that the forces of the planet can unleash. However, while the hazards that volcanoes pose can’t be avoided, efforts to mitigate and prepare are paramount.