The Atlantic hurricane season traditionally runs from June 1 to November 30. While forecasters have predicted a relatively normal hurricane season for this fall, the season is already on pace with some of the most active seasons on record when it comes to the number of named storms that have formed going into September. To be clear, this doesn’t mean that 2017 will definitely end up in the upper echelon of the most active Atlantic seasons, although forecasts do envision an active remainder of the season.

The most significant September tropical event that occurred within the past ten years took place in 2008. Hurricane Ike resulted in $12.5 billion in estimated insured losses and 1.4 million claims across nine states. Tropical Storm Lee, which occurred in 2011, was the second-largest September tropical event. That storm resulted in $535 million in estimated insured losses and 109,000 claims. The year 2008 saw the most active September in the last ten years, with a total of three tropical events: Hurricane Ike, Tropical Storm Hanna, and Hurricane Gustav.

Since 2007, Property Claim Services® (PCS®) has designated 25 events in the month of September, totaling 2.5 million in estimated losses or approximately $20.6 billion. 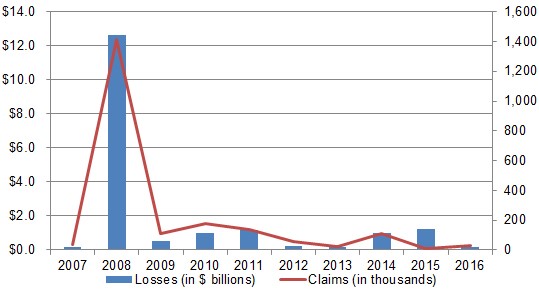