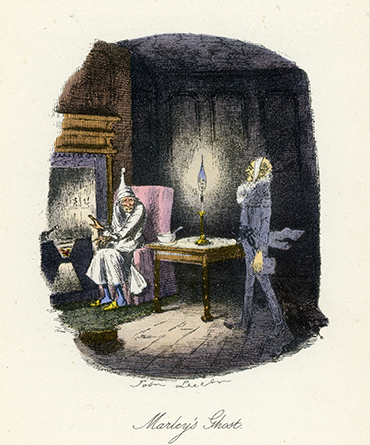 Scrooge & Marley, PLC, was a privately held partnership in 19th-century England that operated out of a dingy warehouse in the Cornhill section of London. Partners Ebenezer Scrooge and Jacob Marley founded the “counting house” with no outside investors or small business loans.

Marley referred to the firm as “a money-changing hole,” a closely held, secretive financial institution that charged high interest rates on all transactions. Luckily for Scrooge & Marley, there wasn’t any Dodd-Frank law or Consumer Financial Protection Bureau in Victorian London. The firm was free to issue loans with extremely high interest rates without oversight. Scrooge & Marley was a bastion of penny-pinching, debt-collecting industrial capitalism, and the partners saw unprecedented growth and increased revenues year after year.

The untimely death of Marley in 1836 combined with Scrooge’s extreme parsimony and refusal to invest properly in the business exposed the firm to many unnecessary risks. One of the key investments a savvy businessowner should make to address that problem is to carry commercial insurance. Let’s take a look at some of the specific risks that threatened Scrooge’s firm.

All I want for Christmas is a little heat

It was said of Scrooge and his disdain for mankind that “no warmth could warm, no wintry weather chill him.” In the office, Scrooge kept a very small fire in a stove fueled by one piece of coal. That was all he and his lone employee, clerk Bob Cratchit, had to warm themselves. Keeping a coal-burning fire in the workspace is a fire hazard. With no screening to protect nearby carpeting or paperwork, one stray ember could have set the whole counting house—and Scrooge’s entire business—up in flames. Commercial property coverage for fire damage, with reliable replacement cost estimates, would have been a minimum requirement. Had the warehouse been consumed in flames, he would also have benefited from business interruption insurance, which could have softened the blow of losing track of which of his borrowers had been squeezed dry or not.

Deck the halls with frozen pipes

It was said that Scrooge “carried his own low temperature always about with him; he iced his office in the dog-days; and didn’t thaw it one degree at Christmas.” Frigid December temperatures, lack of adequate heating, and the substandard insulation of a Victorian warehouse would have created the perfect conditions for water-related property damage. And with the introduction of cisterns came pipes, and pipes in Victorian London were apt to burst. Ironically, the rush of cold water would have brought production to a “freeze.” If Scrooge carried a commercial property policy, he would have been covered for water damage. Again, business interruption insurance would have helped, too.

You’re a mean one, Mr. Scrooge

Scrooge’s icy cold, dimly lit counting house featured working conditions perfect for workers' compensation claims, if such coverage existed at that time. Cratchit would have had plenty of potential chances to file such a claim. First, all the repetitive writing he did might have led to carpal tunnel syndrome. Next, since Scrooge required Cratchit to work by candlelight, the poor lighting in the warehouse could have caused eyestrain issues (not to mention yet another fire hazard from the candle). It’s very probable that the furniture, chairs, and desks that Cratchit was forced to use would create a need for ergonomic accommodations to address workplace hazards. Most likely Scrooge, motivated by his penny-pinching nature and disdain for mankind, wouldn’t buy workers' compensation insurance if it existed. He wouldn’t care to provide for his employee’s medical costs or lost wages due to any workplace injuries. In this day and age, Scrooge would have eventually faced regulatory penalties and been sued for such lack of foresight.

It’s beginning to look a lot like Christmas accidents

Try as he might, Scrooge didn’t live in isolation. He affected those who borrowed money from him, his lone employee, and the people around him—and in some instances those people represented an insurable risk. For example, it was reported that Scrooge, being the man he was, didn’t shovel or de-ice the area in front of his property. (In fact, Cratchit slid on it multiple times.) He ended up creating an attractive nuisance—children used the area as an icy slide. That may have presented a serious moral quandary for Scrooge. On one hand, he was loath to put any time, effort, or money into maintaining the area. On the other hand, he inadvertently created an entertainment venue for the street rabble he despised. If anyone were injured, Scrooge could have been liable. He should have maintained the appropriate liability coverage in his commercial policy.

Throughout most of his life, Scrooge was concerned only with his own bottom-line profit and little else. However, later in life, Scrooge underwent a moral transformation—some said he had a visionary experience related to Christmas—and he vowed not to be the greedy, stingy, materialistic “Scrooge” everyone despised. As commercial insurers, we hope that transformation also brought Scrooge a professional epiphany. Maybe he finally offered Cratchit paid time off, a true living wage, and some health benefits. And perhaps Scrooge finally invested in businessowners insurance—with coverages that address the many situations outlined above—to protect the firm from all those risks he’d left it exposed to for so long.

To avoid at least some of Mr. Scrooge’s pitfalls, information on BOP, General Liability, Workers' Compensation, and Commercial Property underwriting is available here.

Rick Stoll is the assistant vice president of product management at Verisk – insurance solutions. He is responsible for the development and management of data and analytic products. Rick has over 15 years’ experience building, managing, and selling complex digital services – primarily ones grounded in big data analytics. Prior to ISO, he lead innovative product initiatives at Dun & Bradstreet and American Express. He holds a bachelor of science degree in Industrial & Systems Engineering from Virginia Tech and a master of business administration from New York University - Leonard N. Stern School of Business.